In his latest op-ed, the popular German commentator Henryk Broder laments the absurd extremes that political correctness has reached in Modern Multicultural Germany.

Many thanks to JLH for translating this piece from Die Welt:

There’s No One Left to Insult 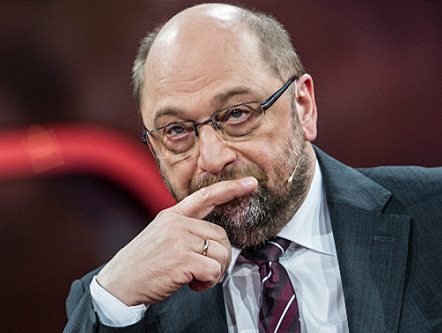 (Photo [not the one above, a different snap of the photogenic Mr. Schulz]: At a campaign event in Göttingen, SPD chancellor candidate Schulz said: “I am much more interested in golf carts than in golfers.” His comment caused some upset in the golf association.)

So Martin Schulz doesn’t like golfers. Is that so bad? Having to like everybody may be evidence of societal advance. But it’s not healthy.

Martin Schulz, who always chooses his words with care, probably had no idea of the reaction he would elicit with his remark that he was “more interested in golf carts than in golfers.” The arrogance of these people — golfers — was endangering “the core of German industry.” To be sure, there was no hullaballoo[1] in the social media, but there were strong reactions.

First and foremost, the president of the German golf association pointed out to candidate Schulz that there are 1.8 million golfers in Germany, among them quite a few SPD sympathizers. Sahra Wagenknecht[2] commented: “Schulz is wrong. SPD is interested in neither golf carts nor golfers, but in golfing dictators who buy weapons.”

That was pretty funny, but it missed the real point. Schulz has unintentionally highlighted a problem. There is no one you can, in good conscience, insult anymore. Unlike the era of Franz Josef Strauß, who casually announced in 1970: “I’d rather be a cold warrior than a warm brother.”[3]

There are good reasons that pejorative references to homosexuals, Jews,[4] the handicapped, gypsies, freemasons and Jehovah’s Witnesses are beyond the pale. The negative feelings against these groups have not disappeared, but it is best to keep such feelings to yourself.

One false word and you face an accusation of “group-related misanthropy.” That may be evidence of social progress, but it is not healthy. Love of neighbor is not boundless. It has to be possible to dislike someone. Antipathies, too, are a part of the human repertoire.

So who else is there to dislike? People who drive diesel cars, people who don’t separate their trash, parents who home-school, Christians who celebrate a Latin mass, homeopaths who prescribe little white pills, and dog owners who don’t clean up after their animals. That’s all there is, and that is quite noticeable these days. The times are exciting. Only the politics are boring.

11 thoughts on “There’s No One Left to Insult”