A professional hayseed in Austria has gotten himself into trouble by saying politically incorrect things about immigrants on social media. Our German translator JLH has translated an article and interview with the “EU Farmer”, along with an introduction. 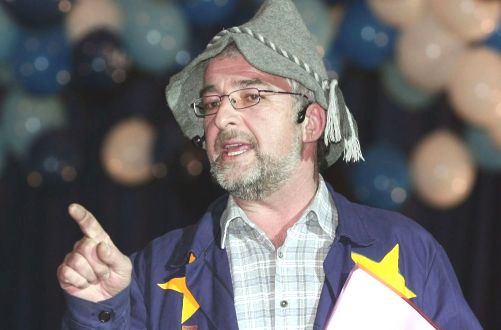 The interview below was occasioned by the sudden emergence of a local celebrity as a white-hot focus of the “refugee” debate. The article in Kronen-Zeitung appended a short biography and the text of his remarks that caused the uproar. They appear here first, for the convenience of GoV readers.

Manfred Tisal: Born in Vilach in the Austrian state of Carinthia on September 23, 1953. Apprenticed as a chef, later editor and spokesman for the private broadcaster “Tele Uno.” Appearing since 1990 as the “EU Farmer” at the Vilach Fasching festivities. He offers “COWmentaries” on Austrian Broadcasting radio in Carinthia. Publishes books and CDs. He is the father of four and married to his second wife, Daniela, a former journalist.

Day after day, from my balcony, I see asylum-seekers with Adidas shoes, Nike T-shirts and Diesel jeans, with smartphones and shiny new bikes sauntering by, talking. Envy gnaws at me. Not because I don’t have that, but because they have it for free. And with a guaranteed minimum income they haven’t earned. Maybe I could afford all that, if I didn’t have to pay rent. If I didn’t have to enter a contract to buy my smartphone, if I didn’t have to pay for personal hygiene products, the TV fee, food, the car needed for my job, and didn’t have to meet diverse expenses for wife and child. And of course all taxes and fees. When I hear about refugees, I think of my father walking all the way back to Vilach from imprisonment in Russia. He and his parents had to re-build their bombed-out house. In the post-war era, he had to feed his family on a railroad salary of 740 schillings. And there were others even worse off. He fought for his land and, in the years leading to his death, was rewarded by fine phrases. But he built it up with his small contribution.

And that has allowed us to anticipate a social guarantee. A guarantee that is now being taken from us. By the onslaught of politically legitimized social spongers. I don’t think they chose their target without thought. After all, they are connected to the world by internet and cell phone. They are not so stupid that they would not choose the best for themselves. And I am telling everyone not to stick me into the “populist rightist corner” — which has become pretty much standard practice for us in this country. This is about justice and should not be about partisanship or religion.

And here is the interview:

His commentary on “asylum-seekers in Nike T-shirts, Diesel jeans and smartphones” has drawn the “EU Farmer” of Vilach Fasching into the public stew. Manfred Tisal (63) speaks with Connie Bischofsberger about the liberty of fools, applause from the right and anonymous death threats.

The waitresses in Staubers Städtschenke are serving the midway meal. The mayor of Vilach is there. When Manfred Tisal and his wife, Daniela, enter the pub, all present look up from their plates. In the course of the Krone interview, many of them come to our table and shake hands with the “EU Farmer.” “Thank you for you courage,” they say. Or, “You were right!” Mayor Günther Albel (SPÖ) does not feel that way — he would have preferred more a nuanced approach to the subject of immigration.

One post on Facebook in which Tisal was annoyed by “asylum-seekers with Adidas shoes, Nike T-shirts, Diesel jeans and smartphones,” reached hundreds of thousands of people and set off an unprecedented discussion about refugees.

The state’s attorney’s office in Klagenfurt is investigating a Carinthian woman for hate speech. On the EU Farmer’s Facebook page, she wished concentration camps and the Islamic State on “social sponges, rapists and Gutmenschen.” In our conversation, the Carinthian comedian regretted such comments, but took nothing back — quit the opposite, he doubled down. His wife, Daniela, on the other hand, looked worried.

7 thoughts on “The Farmer Wasn’t Cowed”