The following paper was presented last week at OSCE Warsaw by the Sea Jay Foundation.

Freedom of speech and of peaceful assembly is a fundamental right for citizens in the OSCE area. But this right is being seriously challenged in the United States. The confrontation in Charlottesville Virginia was labeled by UN officials as an example of “rising racism and xenophobia in the United States” and they urged the government to “punish the perpetrators of hate crimes”.[1]

However, facts are coming to light: the organizer of the event, a Mr. Jason Kessler, was recently involved in the “Occupy Wall Street movement”[2] funded by Mr. George Soros. It’s suspicious that an individual would change his political views from Radical Left to white supremacist in less than a year. Mr. Soros does have a record of funding these kinds of events, having funded Black Lives Matter[3], the demonstrations in Ferguson, MO[4], the coup and bloodshed in the Ukraine[5] and many other groups.[6]

In Charlottesville, witnesses saw Antifa demonstrators dressed in black, Black Lives Matter members, and individuals dressed in KKK T shirts, all getting off the same six busses[7] before the confrontation. Does this not smell like a “false flag” operation? Does this not have Mr. Soros’ fingerprints all over it?

While the President condemned the violence by all sides, the left-wing media continued to give the Left-wing groups a free pass and insisted that the President condemn only the “white nationalist racist” groups! Soon thereafter the “Freedom Rally” in San Francisco was cancelled due to “safety concerns”[8]. The pattern is clear: if you do not agree with the Left, you are a Nazi and you will be shut down with violence or the threat of violence! This is a serious abridgement of Constitutional rights! 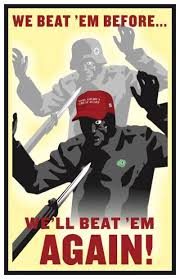 One Antifa poster is telling:

This poster demonizes and dehumanizes as “Nazis” the 63 million Americans that voted for President Trump! This poster is counter-factual! Many Americans who voted for the President are elderly veterans of the very war that brought down National Socialist Germany, nearly three generations ago. To label such people “Nazis” is preposterous! It is certain that the fabric of our civil society cannot long survive such outrages! It also violates the OSCE participating States’ commitment whereby “everyone will have the right of peaceful assembly and demonstration”.

The Sea Jay Foundation recommends that the OSCE participating States investigate and determine who is responsible for organizing and funding this violence that is taking place all across the West.

The Sea Jay Foundation also recommends that participating States grow some backbone in defending the rights of those who are being threatened and intimidated!

The Sea Jay Foundation calls for the restoration of the rights to free speech and assembly, to which citizens of the OSCE area are absolutely entitled.