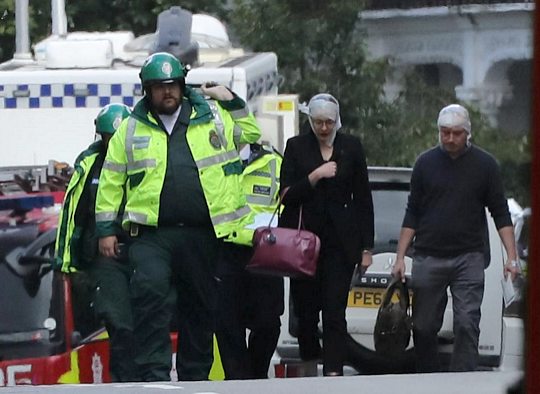 Here we go again. Mass panic in a smoky, crowded space. Police cars and ambulances crowded into a taped-off city street. Men in body armor carrying automatic weapons. Dazed, bandaged civilians walking down the sidewalk. Declarations of resolve by political leaders who are determined not to give in to “terror”.

The allahu akbarriers, Merkel legos, and Koran blocks are all in place, so this time the mujahideen abandoned their vehicles and returned to their perennial favorite, the subway bomb: During rush hour this morning a bucket bomb exploded on the Tube in London. The teddy bears and flowers and candles may be muted this time, however — amazingly enough, no one was killed.

Most telling is the quote from London Mayor Sadiq Khan, who said that his city “will never be intimidated or defeated by terrorism.”

Oh, really, Mr. Mayor? What, exactly, is the shape of the “defeat” you have avoided? And what would “victory” look like, if it ever occurred?

Below are excerpts from the report in The Telegraph:

A huge counter-terrorism investigation is under way after a bucket bomb was detonated on a packed London Underground train at Parsons Green.

Witnesses described scenes of terror and panic after the blast sent a “fireball” and a “wall of flame” through a District line service in west London. At least 22 people were injured, including a boy believed to be aged about 10.

A major manhunt for the bomber has been launched, with police working with MI5 as they forensically examine the device. No arrests have so far been made and the attacker remains at large.

After the attack during the Friday morning rush-hour, Britain’s most senior counter-terror officer Mark Rowley said: “We now assess this was a detonation of an improvised explosive device.”

A total of 22 people – including children – were injured in the explosion, with most of them suffering from “flash burns”.

Others were trampled and suffered crush injuries in the rush to escape the packed carriage, which was the last in the train.

Witnesses reported seeing people “covered in blood” after a “flash and a bang” from the device, but sent a “fireball” through the packed Tube train.

Pictures and video posted on social media showed a flaming bucket – which is said to have had wires coming from it – inside a Lidl carrier bag on the floor of a carriage.

The device is not believed to have fully detonated and it is reported that it could have been set off on a timer.

Emergency services including armed police rushed to the scene after being alerted at around 8.20am.

Prime Minister Theresa May is to chair a meeting of the Government’s Cobra emergencies committee this afternoon to discuss the incident.

It comes with Britain on high alert after four terror attacks in 2017. The official threat level currently stands at severe – meaning an attack is seen as “highly likely”.

The blast comes with the UK on high alert following four terrorist attacks so far this year.

Authorities have foiled 19 plots since the middle of 2013 – including six since the Westminster atrocity in March.

The incident comes a day after figures revealed terror-related arrests in Britain have hit a new record high, with suspects held at a rate of more than one every day.

Mayor of London Sadiq Khan has appealed for calm following the Parsons Green terror incident, saying London “will never be intimidated or defeated by terrorism”.

20 thoughts on “Bucket Bomb on the London Underground”