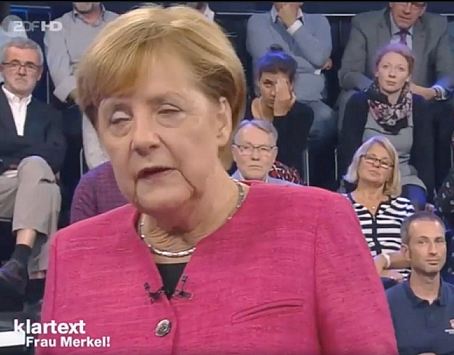 Speaking of scripted events with Chancellor Merkel, here’s a story about a woman who was un-scripted from the same event.

Astrid Passin is the spokeswoman for the survivors of last winter’s jihad terrorist attack at a Berlin Christmas market, which killed twelve people. After initially extending an invitation, Mrs. Merkel’s handlers must have concluded that Ms. Passin would have been bad for the chancellor’s optics during the final days leading up to a crucial election. After all, it was Mutti’s “refugee” policy that enabled the perpetrator of the Christmas market attack, Anis Amri, to carry out his atrocity.

Many thanks to Egri Nök for translating this article from the Berliner Morgenpost:

The cancellation came suddenly and was very disappointing. The spokeswoman for the survivors of the terror attack of the Breitscheidplatz was supposed to be a guest in the ZDF [public TV] show “Klartext, Frau Merkel!” [Plain text, Mrs. Merkel!]. But hours ahead of time she was cancelled via a phone call. “The reason was not credible,” says Astrid Passin. “I think that my questions would have been too inconvenient.”

On July 24, Passin received an email from ZDF, asking her if she would be willing to appear in the show as a spokesperson for the survivors. They had seen her in a TV report, the email said. “It must have increased your suffering when, in such a difficult time, you had the feeling that politics and the authorities abandoned you. Your appearance in the report by Spiegel TV conveyed this combination of mourning, disappointment and anger impressively and left a lasting impression.”

Passin discussed it with other survivors, and agreed. There were further talks with ZDF. She was asked, which questions she wanted to ask. “But I declined”, she said. “I wanted to be able to react spontaneously, and authentically.” This did not seem to be a problem. Astrid Passin was even sent a contract.

Then, on Thursday, she received the call from ZDF. Tenor: She should not come. There were problems after the show from the day before, “Klartext, Herr Schulz!” [Plain text, Mr. Schulz!]. Citizens who had asked questions had allegedly come under fire by media and in social networks. They wanted to spare her this experience.

“I’m sad that I’m not allowed to ask Mrs. Merkel my questions”

“I told them that as a spokeswoman for the survivors, I am used to media pressure, and that I find it very regrettable and sad that I’m not allowed to ask Mrs. Merkel my questions,” said Astrid Passin. “But it didn’t help. They repeated the same explanations. I felt that they didn’t want me to come.” This were even more regrettable, as this was in a way her second disappointment.

Back on March 28, her attorney Andreas Schulz had written a letter to the chancellor and asked her to meet with the survivors. The request was declined. “This was already a disappointment,” says Astrid Passin. “We would like to know why, being the chancellor, she could not find the time to meet us, and why we didn’t even receive a personal letter of condolence from her.”

ZDF confirmed that the editors “reviewed the possible guests immediately before the show”. After the “Klartext” show with Schulz [Merkel’s competitor, Social Democrats] “critically reviewed who would be able to stand the pressure of the live broadcast and appearing in front of an audience of millions.” But ZDF were still in close contact with Mrs. Passin. They were planning a documentary on the victims of the attack and their families.

A spokesman for the CDU explained: “We did not select the guests, we did not have access to the selection process, and we have no knowledge of who will appear as a guest and which questions he will ask.”

2 thoughts on “A Disinvited Guest”