So we had our rural version of the 2017 solar eclipse. And a great time was had by all, including a friend who dropped by with some of her garden harvest but stayed to use the Baron’s pinhole box.

At the height of the eclipse here (about 90% coverage, we figured from looking at the shadow) the light was occluded, strange. Think of a Magritte painting, say a version of “The Empire of Light”. This occluded light was most obvious when you looked at shadows, which I did for a while with the tall Rose of Sharon bush-becoming-a-tree. The edges of things seemed sharper. The diminished light made the remaining Japanese beetles sluggish, so I was able to grab quite a few from the blossoms.

We all noticed the welcome dip in temperature from the mid-90s down perhaps about ten degrees for a short while. 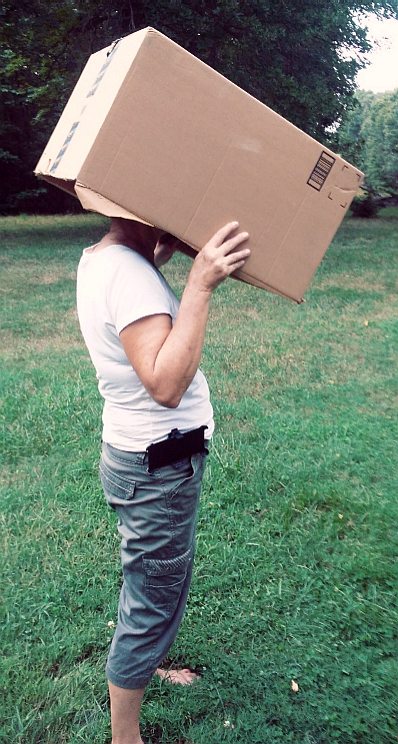 So here is Susie with her head in the Baron’s Pinhole Box, watching the eclipse a bit more than half-way through. Beyond her is the hickory tree I’d planned to sit under to watch the leaf patterns display many eclipses. But then the B pointed out that the grass broke up the image too much; he said you’d need a city sidewalk to really get the multiple image effect. The nearest sidewalk was fifteen miles away.

As usual, he came up with a solution: a piece of painted wood that captured the magic of the moment as well as any sidewalk could have. 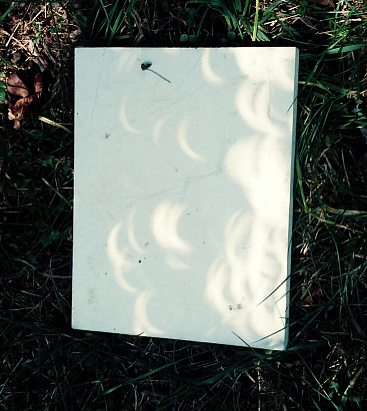 We hope all the travelers to South Carolina made it home safely. I tripped going up the stairs as we returned to our dimly lit house, but that doesn’t count as a travel accident. That’s just Dymphna Walking…