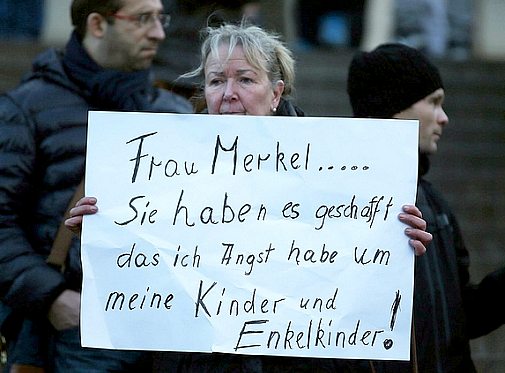 It is by now a well-known fact that the new arrivals who have enriched German and Austrian culture over the past two years are responsible for most of the rapes and other forms of sexual violence in those two countries. What is less well-known is that Afghan “refugees” are more likely to be the perpetrators than any other ethnicities among the migrants.

Many thanks to Nash Montana for translating this analysis from the Swiss daily Basler Zeitung:

The sex hooligans from the Hindu Kush

Sexual attacks on women by asylum seekers have increased.

[Photo of woman holding up poster that reads: “Frau Merkel… you have managed to make me afraid for my children and grandchildren!” Text under the picture: “About nine times a day a woman in Germany is sexually coerced, tormented, humiliated by asylum seekers. The image is from the aftermath of Silvester Night in Cologne.”]

When Chancellor Angela Merkel temporarily abolished state borders and therefore caused a gigantic wave of immigration, the “quality media” were jubilant, and so were most politicians — “We are being gifted people (pieces of gold)” — and a large portion of the citizenry. The newcomers who arrived on trains and in buses were greeted with applause, welcome posters and plush animals. As if the one and a half million mostly young men from archaic civilizations were a boy band and the world a John Lennon song. But all that seems like an eternity ago now. A sobering reality has in the meantime set in, and the glassy-eyed euphoria has evaporated. The anarchistic migration of 2016 has led to a “distinct increase” in “violent crime”, as the Minister of the Interior, Thomas de Maizière, had to contritely admit two months ago.

In the of “Criminal acts against sexual autonomy and self-determination” alone, 3,404 asylum seekers were registered as sexual criminals. About nine times a day somewhere in Germany, a woman, or a child, is being raped, sexually coerced, tormented, cornered, humiliated and debased by men, who — coming here allegedly seeking protection — have been taken in unconditionally and were given accommodations and everything else. That is what the official numbers say. But an estimate of unreported cases will most likely be much higher.

This is not just the case for Germany, but for all European countries which have permitted significant migration from mostly Islamic chaos-zones in the Third World. Another example is Austria. Cheryl Benard, the Austrian-American social scientist and feminist, has studied the phenomenon of an increase of sexual attacks on women by asylum seekers in her country of birth.

This insufferable list never seems to come to an end

Her report that was published in the July 11, 2017 issue of the magazine The National Interest describes a series of disturbing incidents in recent times. For example, the group rape of a fifteen-year-old girl that took place out in the open in Tulln, perpetrated by three young asylum seekers. Or the group rape of a Turkish student by three asylum seekers in a public toilet in Vienna. Or the attempted rape of a young visitor at the Donau Island Festival. She first was harassed and groped, and then after she tried to flee, she was pulled behind a bush where at the last second a policewoman saw what was happening and the girl was saved. Or the incident of the mentally-challenged woman in Linz who was kidnapped and brought into the apartment of an asylum seeker, where he raped her, after which she managed to flee to the bathroom and call for help through the window while her rapist was banging on the locked bathroom door.

This insufferable list never seems to come to an end. There is the young woman who was sexually attacked on a train by two asylum seekers and was only able to be rescued through the brave intervention of two fellow passengers. Or that young mother, walking with her two young toddlers in the middle of the day in a park above the Donau, when she was suddenly attacked by a man, pushed to the ground and choked. Thanks to her desperate resistance she could prevent herself from being raped. The offender, a young asylum seeker, was later found by a police K9, because the woman had ripped the hood off the attacker’s sweater.

The one thing that is common to all these cases is the absolute brutality and the reckless disregard about any possible witnesses. Almost as if the offenders are completely unimpressed by the legal sanctions in their host country. Also common to these offenders is that the majority of them are from Afghanistan. They are responsible for half of all sexual crimes by asylum seekers. To put it in context: While Syrians, for example, commit “only” ten percent of crimes, the number of asylum seekers of from Syria and Afghanistan is about the same. It’s an interesting detail. Afghans, just like Arab Syrians, come from conservative Muslim societies, in which their women have a status of wards with no rights of their own, and yet the young men from the Hindu Kush are obviously more inclined towards unbridled sexual violence. But whatever the reasons may be for this, the primary duty of the State would be to protect its own citizens first. Asylum seeking sex hooligans should be deported from the country, whether to Kabul or to Mogadishu. Only in this way would potential copycat attackers learn to take local laws and people seriously.

16 thoughts on “The Sex Hooligans From the Hindu Kush”