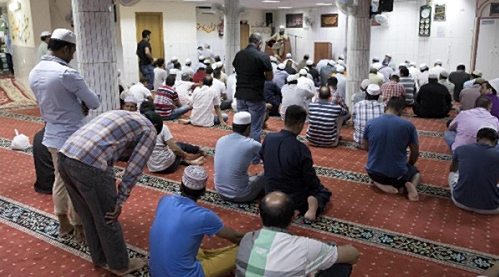 That’s what the Muslims of Barcelona are worried about. They’re suffering more than the infidel Spaniards, because they were hit twice — first by the attack, and then by the awful Islamophobia.

Reading this, you can see the level of European collective psychosis, dhimmitude, islamolatry, civilizational self-loathing, infatuation with our soon-to-be executioners, and whatnot. Bring out your entire stock of barf-bags before reading, for it is extremely vomit-inducing (besides being hilarious, creepy and sad in equal parts).

The sadness of the Muslim

There’s an “us” and a “them” in the air since the moment when journalists take a walk through the halal butcher-shops of the Raval neighbourhood or when they phone the representatives of the Muslim community after an attack, and that fence raised on the foundation of questions is the first thing the Muslims addressed lament, with an expression as if saying: “You and I live in the same city. What happened hurts me as much as you”. If there’s a “them” in all of this, they explain afterwards, let it be useful to name the “fanatics”, those who are capable of driving through a summer Rambla, knocking down human beings. “I don’t recognize these people, they’re not Muslims, a true Muslim that believes in god [note: in lower case in the original] doesn’t do these things.”

The words are uttered — they carry rage, frustration, outrage, all that overwhelms the Muslims of the targeted city right now — by Narjisse el Adnani, “a Moroccan raised in the Canaries and a neighbour of Barcelona”, at a halal butcher-shop on Hospital Street, right in the multicultural heart of the city. She heard through one ear the topic that is being spoken about, and wanted to intervene; one day after the attacks, the Muslims of Barcelona know they face another “them” and “us” moment, and they feel the need to make themselves heard. “The truth is we suffer doubly, because what happened is terrible and because our name has been tarnished,” she says. Just like almost everyone else when the conversation enters the territory of religion, Adnani quotes the Quran verse that states that whoever kills a human being kills “all of humanity”. A Muslim deserving of the name, she says, acts accordingly.

It was Friday, a day of prayer in the five mosques of the Raval neighbourhood. At the Centre Islàmic Camí de la Pau [Path of Peace Islamic Centre], on Erasme de Janer street, a small crowd leaves after praying, a little after 2pm. The imam has stuck to the script and has spoken about the imminent feast of sacrifice, but the vice-president of the association, Mohammed Iqbal, aware of what might happen from now on, intervened at the end and made a brief speech about the attack. “The truth is, we are quite uneasy about the possibility of stigmatization,” he says, “so I stated that we must not fall intro traps: if they insult us on the street, we change sidewalks, if there are Islamophobic graffiti, we don’t pay them any attention. They are things that we understand might happen these days.” Yesterday itself, the façade of the mosque of Montblanc (Conca de Barberà) in the early morning was revealed to have been sprayed with Islamophobic messages. “Everything that happens in this city affects us, the good and the bad. Now we are twice worried, first because of the attack in itself and, two, because it leaves us in a socially vulnerable situation.”

“We are citizens of this country and we practice the Muslim faith,” Riay Tatary, president of the Islamic Council of Spain, tells this newspaper, “and what harms this country harms us. If the discourse of ‘us’ and ‘you’ [note: in plural in the original] is not changed, we are unable to achieve anything together, we consider ourselves part of our society and defend it with all of our force.” Pronounced in Madrid, his words find an echo all across the Raval neighbourhood. “They’re animals,” says Mohammed Hafeez, a Pakistani, the owner of several shops on the Sant Antoni Abat street. “We live here,” says Bilal Ahmed, also a shopkeeper, at his shop on the del Carme street. “My wife, my son, me. Now this is my country, and what happened hurts me as much as anyone who was born here”. On Thursday he took a group of tourists running away from the Rambla into his shop. Never did he see them as “them”. He saw them as us.

“We feel the same pain as you, or more. I swear this to you upon my mother.” Adam is a waiter at El Rey de Istanbul [The King of Istanbul], a restaurant on Hospital Street within which some tourists took shelter after the attack. “The police lowered the shutters of the place and we stayed inside with five or six injured persons.” Then he says, reports Beatriz Pérez, that “there are feelings that cannot be expressed with words,” but soon after he manages to express one clearly: “They” —meaning the Islamic State — “want to separate us”. They.

43 thoughts on “The Sadness of the Muslim”