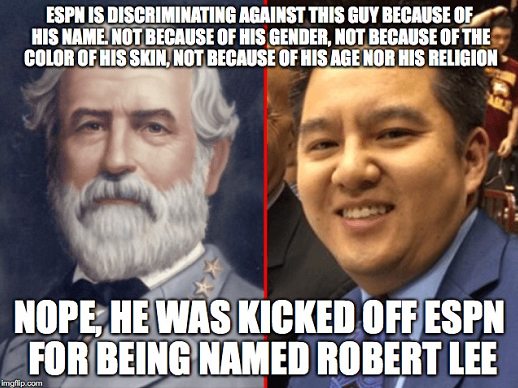 A sports broadcaster for ESPN was scheduled to call a game played by the University of Virginia’s football team, but he was pulled from the gig because his name is Robert Lee. It was determined by all concerned that in the interests of racial sensitivity, it would be better if Mr. Lee were replaced by someone with a less unfortunate name.

The thing is, this particular Robert Lee is not the scion of a benighted Southern family. He is not even white. He is an Asian — not a British-type “Asian” from Pakistan, but a man of Chinese descent who speaks both Mandarin and English. His surname is sometimes spelled “Li”. It’s very common in China.

Well, I guess you just can’t make this [noxious substance] up.

For more information, see The Washington Post or ESPN. Also, see this photograph.

Nash Montana drew my attention to this story, and also made the meme pic at the top of this post. It reminded me of a much earlier controversy over the name Robert E. Lee. I related the story to her, and she urged me to make it into a post.

I don’t have any sources for this anecdote. I remember it from long, long ago — probably from sometime in the mid-1980s. It was in the Washington papers at the time (most likely both the Post and the Times), and I followed it avidly as it unfolded.

Here’s what happened, as well as I can recall it:

There was a young man named Robert E. Lee who lived in Montgomery County, Maryland. That’s one of the most affluent counties in the country — a whitebread, liberal, thoroughly honky D.C. suburban county, where many of the most well-paid employees of the federal government live.

Mr. Lee had a bright idea. He went to court and legally changed his name to Roberto Eduardo Leon — that is, the Spanish version of his real name. He then filed paperwork to claim benefits under one of the minority set-aside programs of the day. His request was denied, of course — he was an obvious honky; how could he possibly claim benefits reserved for minorities?

His lawyer took the case to court. You see, the wording of the relevant federal law set aside benefits for persons “with Spanish surnames”. Which Mr. Leon most definitely possessed. Legally speaking, he had them over a barrel. He had a right to that federal moolah.

The thing is, I can’t remember how it all turned out. I don’t know if he got the money, or if the feds found some loophole in the law that would allow them to deny him his set-aside.

In any case, I admired the fellow greatly. He had cojones and gumption, and managed to put a finger in the eye of the Great Federal Diversity Behemoth.

If anyone from the D.C. area remembers the final disposition of the Roberto E. Leon case — or can correct any errors of recollection in my story — please leave your information in the comments.

9 thoughts on “The Night They Drove Ol’ Dixie Down”