The following translation was published yesterday at Vlad Tepes in a slightly different form.

Germany and Jordan in Dispute over Sharia for German Armed Forces

An original translation by Egri Nök from Zeit Online:

Germany and Jordan in Dispute over Immunity for Soldiers

Before the German Armed Forces move to Jordan, the German government intends to achieve their immunity under the law. Otherwise, they would be under sharia law. 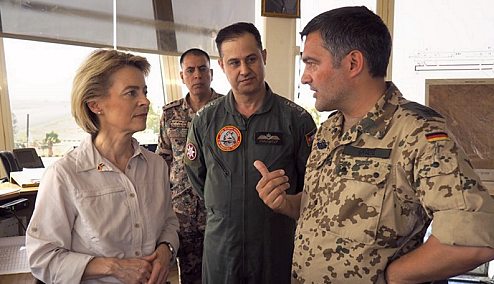 About 250 German Armed Forces soldiers are to be stationed in Jordan from September on, to fly reconnaissance flights against the terror militia “Islamic State” from there. The federal government wants them to be protected from criminal prosecution in Jordan, as it partially still is under the Koran-inspired sharia law which also uses the death penalty. The jurisdiction of the Sharia courts is limited to certain aspects such as family law, however.

After withdrawal from Turkish Incirlik base, the soldiers are to be stationed at the Jordan base Muwaffak Salti near Al-Asrak. The moving was a decision by the federal government early June. The reason for this decision was the conflict with the Turkish government regarding the visiting rights of German representatives to the soldiers in the German Armed Forces.

“We are still negotiating the stationing arrangement,” the defense ministry in Berlin comments. They were not expecting a delay in moving the Tornado reconnaissance jets, which is scheduled for October [“Tornado” is the name of a type of German military jet — translator].

Last year there were similar discussions with Qatar. There, a compromise was achieved, according to which soldiers were flown out to Germany, instead of being held responsible before a Qatari court. In Jordan such a compromise seemed unlikely, due to the size of the mission, Der Spiegel quotes sources in the Federal Armed Forces as saying.

12 thoughts on “Sharia Law for German Soldiers in Jordan?”