We’re now well into the hundredth anniversary of the Battle of Passchendaele (Third Battle of Ypres), which runs from late July to early November. In the following essay by MC, the mud and carnage of the Western Front are a jumping-off point for a discussion of the parlous times we’re living in a century later. 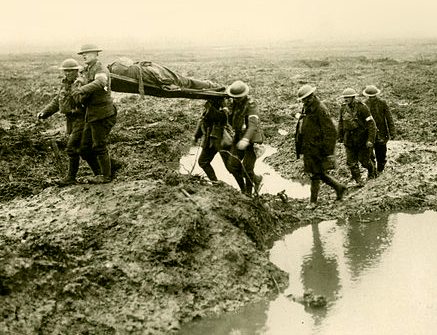 A definition of insanity is doing the same thing over and over again and expecting a different result. This was amply demonstrated during the First World War when generals expected an artillery bombardment to clear the barbed wire (It didn’t) and expected extended artillery bombardment to put the machine guns out of action (it didn’t) and sent men marching in extended lines into those machine guns supposedly destroyed in the bombardment (they died).

Socialism is also repetitive, and the results are always the same, viz. Venezuela. The ideas are not new; they are in fact very ancient. The masses are ruled by a gifted/privileged/intellectual elite with a vision, supposedly for the betterment of all, but somehow it never quite works out that way.

It never quite works out, because the Robespierres oust the Dantons and turn the whole benevolent idealism on its head. Under Danton “liberté, égalité et fraternité” were supposed to be something benign and of benefit to all, but under Robespierre they became vicious blades by which the heads of the unwary could be removed. To curb somebody else’s liberty became a capital offence, to appear to treat somebody as inferior became a capital offense, and to seem to be unfriendly too, became a hate crime punishable by beheading. Madame Guillotine was kept very busy removing politically incorrect heads.

A new terror is upon us. The man who says something out of order will be sent to gaol on trumped-up charges, there to have to survive in the company of malicious Muslim thugs who will scald him with sugar water with complete impunity.

Murder of dissenters is permitted, and not just by the imams. The modern-day committees of public safety views ‘nationalism’ as a much more serious crime than rape or assassination, especially when the victims are members of a preferred race/gender/religious group.

Europe does not need a guillotine as such this time. It has an army of willing executioners specially imported across non-existent borders, exports from the barbarism of the Middle East and northern Africa, young men ruined by Islam, an Islam that is yet another husk of socialism, this time wrapped in religion and pseudo-righteousness.

Socialism always means slavery and exploitation. However, in its modern form it does not use these words to describe itself. Historically, the failed iterations of socialism were always slave states: the USSR and Nazi Germany were overt slave states, others have wrapped up their slavery in acceptable verbal packaging such as “The New Deal”, “The Workhouse” or the “Bridewell”.

A hundred years ago the First World War battle of Third Ypres was fought. It was not trench warfare as such, it was “mud-hole warfare”. The ground was so wet that trenches filled with mud as they were dug.

On paper, the plan was good: break through the German lines using a lifting barrage to protect the troops, who would be able to just walk into the now-abandoned enemy trenches on the high ground.

The troops of course had heard this all before, and they knew that to refuse was certain death; murdered by the military police or shot at dawn by their comrades, sentenced to death by a commander who wanted to encourage the others with terror.

Third Ypres started well, with the top being blown off the Messines ridge by mines laid at the end of tunnels.

Then came the inevitable delays as the generals bickered.

So when the slaves soldiers went “over the top”, the Germans had reformed and rebuilt and were waiting, machine guns cocked and magazines full.

The General Staff twenty miles behind the lines knew it was muddy, but trench warfare was always muddy, and soldiers always gripe, so they ridiculed and disciplined those regimental officers who tried to feed news back of the appalling and impossible conditions at the front. Politically correct behaviour was expected of regimental officers by the senior staff officers. As a consequence, the list of names of the dead at Menin Gate seems endless, and those were only the ones whose bodies were never found. One false step, and our fully equipped but tired Tommy was in the mire, drowning in fifteen feet of mud, dragged down by a hundred pounds of kit and whatever consumables he was detailed to carry up to the lines…

The elite officers lived in their own little world. They would break through the German lines whilst quaffing champagne and claret; then they would take all the glory as they returned in triumph.

Today’s ‘generals’ are still quaffing the champagne and the claret, but they don’t wear uniforms anymore. They, too, are unaware of just how deep the mud is at the front. But like those WW1 generals, they don’t care. They demand political correctness, and get it. Nobody rocks the boat and survives; they are too powerful to be challenged.

The foibles of the Great War were only exposed ten years later when Sir Basil Liddle-Hart wrote his history of WW1 and basically advocated that the elite generals should be put on trial for murder (they never were).

On the whole, socialists have never been held to account for their atrocities, either. And Islam is a religion of peace. Therefore it is politically incorrect to ascribe to it any wrongdoing over 1,400 years of mayhem and murder; it was always the other guy’s fault.

Socialism is just a modern word that describes something much, much older; that is: elitism. Elitism is rule by those with influence. The elite are a group of people who, by accident of birth or providence, happen to be at the right place, at the right time, and who by virtue of wealth and/or influence are able to project their wants and desires and their religio-political beliefs into the public arena.

They usually hide behind a charade of intellectualism. They consider themselves to be the intelligentsia with a divine right to dictate acceptable behaviour to the cattle people. They KNOW that their way is best (but for whom?).

Elitocracy never ends well. It means that horribly average and sub-average people can take the reins of real power with no accountability. Even in a supposed democracy, money not only talks but talks big. Unfathomable wealth and power in the hands of an unscrupulous, self-idolising elite can bring down the even most stable of countries.

The dictators of the 20th century were severely damaged beings with a streak of self-righteous ruthlessness that exhibited as thuggery, and taken to extremes, as mass murder. Hitler, Mao and Stalin believed in one thing, and one thing only — themselves. They, too, were immune to the mud at the front. They surrounded themselves with sycophants who carefully embroidered their fantasies and kept the realities twenty miles down the road. 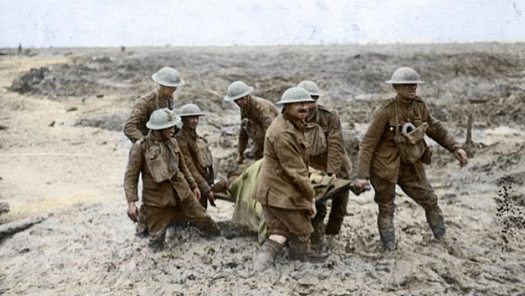 Canadian and ANZAC troops finally made it to Passchendaele and could look back down the gentle slope to Ypres and know that a man had died for every square yard of land taken.

In our current Passiondale, the bullets are emotional and the mud is the stinking swampy mud of political corruption where elected representatives fail to represent, preferring pork and pocket money instead. But are we prepared to shoot the enemy? To shoot the enemy with real bullets and real shells in order to defend our lands? Hopefully this will be the last resort, but we need to be clear on just exactly what we are prepared to do, and then we must DO it.

If the elitists get their way, then thuggery will soon follow. To some extent we already see it in the Antifa movement, always ready to use violence on those who resist their new Nazism. The Antifas are the modern-day Red Guards/SA. Yes, there is so little difference between socialist thuggery and Nazi thuggery that it really is not an issue. Especially when the modern-day equivalents of the Völkischer Beobachter are so quick to defend their actions and decry the so-called alt-right.

Our socialist enemies have created an alternative society on our doorsteps, a society where there is a new definition of “good and evil”, and a new “torah” with which to judge it. In Genesis 3 we read how man’s (puny) knowledge of good and evil became sundered from Yah’s (omniscient) Knowledge of Good and Evil, and how the serpent was at the centre of man’s falling into his own insane dogma, as demonstrated by Cain.

Now that dogma is coalescing across the world at a remarkable rate and with astonishing consistency, fuelled by a constant reinforcement in the media.

This new torah demands that we (white-skinned Westerners) all show lurve, not “hate”, where lurve is unthinking compliance, and “hate” is any form of deviation from lurve especially the expression of elements of western cultural norms deemed to be “supremacist”. Definitions of lurve and “hate” are flexible and vary from day to day and situation to situation, but they are the weapons in a war whose single objective is to destroy Western Civilization and culture and replace it with yet another form of elitist feudalism. “All you need is lurve” is the same war cry as “Liberté, Égalité, Fraternité” or “Workers of the world unite” or “Ein Volk, ein Reich, ein Führer!” and so holds the same hidden message of death for non-compliance.

Lurve is not love as such. It is an enforced behaviour that approximates a charade of love. “Brother”, “sister”, “comrade”, “citoyen” etc.

To deviate from lurve is to be “racist” and “racism” is punishable by total isolation.

I would like to think that our society has the resilience to deal with this problem without resorting to civil war(s), but I look at what the Deep State has achieved in hampering the President and Brexit, and I do begin to worry that it is not enough. The penetration of the institutions by the forces of elitism seems to be near-complete, and the swamp is so profound that it is like the mud before the village of Passchendaele: a huge and costly maw that consumes life and limb.

Finally arriving in Passchendaele a hundred years ago was a pyrrhic victory. The breakthrough to Antwerp and the German submarine pens had not been achieved. All that had happened is that the Allied soldiers reached the top of the hill (with great loss of life), a hill that they held onto for a while and then lost four months later.

Our only way forward without a new shooting war is to trust in (President) Trump, to give (President) Trump a chance, and to try and defend him as best we can even when we cannot understand what he is doing. He is not superman, and he has to try and work with an administration that appears to be full of traitors and media cottonmouths, and it is not easy. But we MUST keep faith.