Further update: The second video I posted has been taken down for violating YouTube’s standards of etc blah yak. Sorry about that — now it looks like we can no longer compare the two clips to determine whether the car accelerated before or after it was hit by the bat. If anyone finds another version of the second clip, let me know, and I’ll post it. Then we can see how long it stays up.

Update: A commenter sends this video, showing the same few seconds of the incident. He says: “If you look at this the baseball bat was done AFTER he had accelerated, this post should be removed, appearing to justify this is not good.”

Did he accelerate before the bat struck the car? You decide:

P.S. for the commenter: We don’t remove posts. We UPDATE them. The truth is better served by allowing earlier errors to remain in place, no matter how embarrassing they might be. 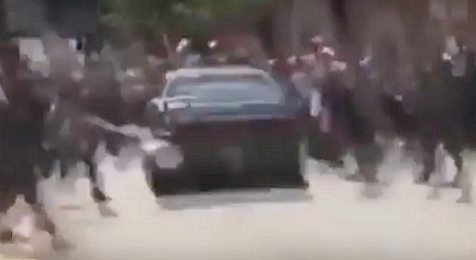 The brief clip below is an excerpt from a longer RT video that someone has modified by steadying it as much as possible and zooming in. In it you’ll see the car driven yesterday by James Fields, just before it ran into a crowd of counter-protesters in Charlottesville. The cameraman is on the east sidewalk of 4th Street, looking south towards Water Street. The point of view is just south of the pedestrian area of the Downtown Mall, as indicated by the newspaper boxes that briefly come into view on the left. The car that Mr. Fields’ car eventually rammed is farther down, hidden by the clot of pedestrians.

Watch closely as a counter-protester holding a bat swings it with both arms against the back of Mr. Fields’ Dodge:

There are several other things to notice and consider concerning this clip:

33 thoughts on “Keep Your Eye on the Bat”