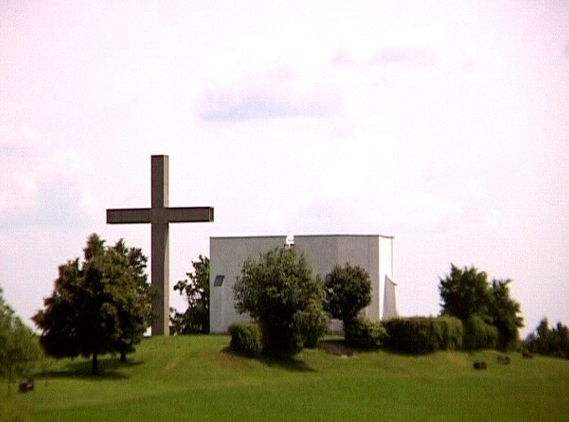 The following essay uses the Battle of Saint Gotthard or Nagyfalu (Hungarian) or Mogersdorf (German) on August 1, 1664 as a jumping-off point for a meditation on the modern-day Muslim invasion that Europe is deliberately inflicting on itself.

Many thanks to CrossWare for translating this piece from the Hungarian news portal Mandiner.hu:

Europe’s cross, or, Islam vs. Christianity

The two generals immediately rode on horseback to Lajos Badeni, the commander of the Christian troops, who was found in bed. They told him they were coming! Badeni quickly looked the situation over. He came up with a tactically excellent plan. If they come, he says, we must go at them…

A fifteen-meter-high cross stretched to the sky on the hillside. How long? Who knows? Who can say when this aggressive emblem will violate someone’s targeted political sensitivity? For now it stands above Nagyfalu. From here, in 1664 a Frenchman and a German watched a mass of Mohammedans emerging from the haze.

It is unnecessary to imagine the moment because it has returned. Therefore, responsibility lies with the theorists of historical cycles, from Thucydides to Vicon to Spengler. Contrary to Soros’ NGOs, human smugglers, collaborative intellectuals, and the wishy-washy Western European leaders who degraded their own citizens into second-tier nationals and to also the perverse politicians of the Willkommenskultur [“Welcoming Culture”].

When I think of Muhammad’s supporters, I never see individuals, but masses. Not my predictive imagination playing tricks on me. In the photos, I see a huge crowd at the Coliseum, a thousand Muslims praying at Westminster. Videos shot at night show endless, endless migrating masses rolling along in the streets of small German villages. The ones who are responsible for these images, the ones that annoy with facts the still worried part of the old continent. The dinosaurs, who still find some meaning in Christianity and European culture. Those intolerant people who cannot understand how to live with multiculture and terrorism. The dishonest excluders. They are not even true Christians, as they do not want to volunteer their other cheeks.

Should I? Is this so bad? Oh yes! You should become extinct in time! Real patience, that is the real deal! Let’s say that if someone were to blow up the Eiffel Tower on top of the French, there would be some politicians crawling out of the ruins who would be the first to wave the banner of tolerance. It would be exemplary. Let’s be honest: Central European leaders have a lot learn.

It is difficult to answer the question: “When did it start?” Let’s first look at the psychological, religious background. Elias Canetti believes that Islam is a religion of warfare. It divides the world between Believers and Infidels. “The fate of these two ever-separated multitudes is to fight against each other. Religious war is a sacred duty.” Let’s add the opinion of J. van Ess that the Christian carries his religion inside himself, while a Muslim wants everything around him to be religious. For the goody two-shoes of the global ecumene, we recommend attention to Helmuth von Glasenapp’s words, who says that the Mohammedans do not know any other God but Allah. They refuse the doctrine of Christian Trinity explicitly. They think of it as multiple deities and refuse to consider it monotheism. (Of course they have a different theological interpretation, if their interests dictates it, but let’s leave that for now.)

Allah the merciful never lets go of the hand of the Muslims, not for a moment; he requires full devotion. The five-per-day collective prayer, the common fast, reinforces Muslims in the sense that they are more of a community than an individual.

They abolish, or in the case of Muslims, they do not allow the development of a fully independent personality. Applied: the suicide bomber has no life — according to our perception — that he could lose. Only profits await him in the afterlife. In a social-psychological sense, Islam still holds millions of its followers in the Middle Ages. This should be taken into account by those who talk about integration and assimilation. I believe many of them really do take it into account. That’s why they dumped Mohammedans on Europe. Not pious Hindus, industrious Asians, or anybody from any other corner of the world. For the sake of the order, once again, Canetti: Islam is a religion of warfare.

As far as terrorism is concerned, medieval villages were barricaded during the plague epidemic. No one was allowed into the village because they could not know who might bring the disease. They did not risk their survival on the bet. I can hardly remember: is that called a healthy sense of survival?

In addition to everything else, the values of Mohammedan culture are not only different, but fundamentally different from ours. Opera, classical music, drama are unknown genres in the Muslim world. The latter had existed for some time in Iran, and then ceased with the spread of Islam. Human representation is not prohibited in any surah (scripture) of the Koran, but the traditions (the hadith) do not permit it on religious buildings. The Renaissance —individuality, the birth of personal liberty — is unknown to them. Here Luther is acting alone in the face of the world’s greatest powers, in the name of God and Truth. In the Mohammedan world denominations are killing each other even today. I know, there were also religious wars for us — but a couple of hundred years ago. In Europe, during the Renaissance, portraiture was flourishing; the birth of controversial modernism is again unknown in Islamic culture. (Unless the Venetian masters make portraits of the sultans.) The explanation of the relationship between portrait painting and personality is obviously unnecessary to dwell on.

The ghastly moment when we recognize the faces from the faceless Muslim masses today when they are placed on the screen and on the front page of the web.

Because they blew up something, they stabbed, they ran over, they shot. In short: they killed. There, in the land where they were adopted. The Western mass media mostly exculpate the killers, and relativize their actions. However, the victims’ relatives are hardly spoken of there. Of course, what can they say? They were in wrong place at the wrong time in a wrong country? In their own home country. In their own home country!?

It is time to return to the historical scenery of our country (Hungary). The Mohammedan raiders were breaking into Hungary well before Mohács. Matthias Hunyadi was still holding his own and even sent troops to Italy — to help his father-in-law — where panic broke out after the Muslims started killing. The Italians recaptured Otranto with a contingent of Hungarians led by Balázs Magyar. They pushed the attackers off the peninsula. Then Mohács fell, as a result of several fatal issues, one of them with the help of the Fuggers — the Soros of their time. For ears set to mishear: I do not see confessional or racial, but financial parallels between the Fuggers and Soros. Jakob Fugger knew how much money he should loan to Lajos the Second to be able to hire mercenaries, but he did not do it; he wanted to punish the Kingdom of Hungary. (In the background, there are “business” causes: mining and profit, so it is about money, as usual.) As far as the 150-year-old occupation is concerned, it was not the flourishing multicultural society that is characterized by the ultra-liberal approach. Have a look at Hungary’s monumental map! Where have the Romanesque and Gothic relics, the Renaissance palaces, and also the populace, gone? Why was Bálint Balassi [Hungarian poet] standing with a sword on the rampart of the castle, why not at the cathedral of a university with a pen in his hand? On the international stage, the Christian rulers sometimes commingled with the Mohammedans; sometimes they fought against them. It was rarely an ideal, powerful European unit. For example: the Republic of Venice was transporting Mohammedan troops like a “non-Christian” NGO. At other times they were fighting against them, or they were helping the Hungarian king with their gold. Olden days, as if they were coming back. Again, I accuse the representatives of historical cycle theory, especially Spengler. (Although Nietzsche’s eternal return is not innocent.)

To answer the question “Where did it begin?”, we must understand the situation today, but I can not find the answer. In Europe, the education of young children might be the starting point, when they started experimenting with them. Here and there the boys were forbidden soldiers, toy guns; then the same anti-military groups fought for women’s rights, so girls could be soldiers too. In a town in Germany they tried to breed small children without violence. They were raised in the kindergarten, so they would respond to aggression with love. (The only reason the author Konrad Lorenz — who wrote the essay about the necessary aggression and the necessary evil that lives within us — was not rolling in his grave because he was still alive.) The unfortunate mentally castrated children then got a shock in school after the first “I give you a slap” from their unconditioned normal schoolmates. They had not been used as experimental rabbits. Now, however, I do not want to get into the field of gender theory, where the lunacy is already at full throttle. Hollywood did its part in breaking down Christian values, the great myth factory, the Frankfurt school, and so on. It seems to have led to some well-thought-out successful campaigns:

The European man is now incapable of self-defense. It is not considered politically correct.

But the jokes with Mohammed cartoons were held as politically correct. We remember: as if someone wanted to shake the Muslims out of their religious indifference (for the advanced ones: “tolerance”) that hey, Muslims, Islam is a military religion! Well, did Canetti move his mouth in vain?!

Then let come what needs to come, namely an illiberal sentence. The German and French generals Hohenlohe and Coligny, who were mentioned at the beginning, were standing above Nagyfalu in 1664 when they saw the emerging Mohammedan army. (Back then they represented a distinct kind of armed “migration”, which is called conquest.) The two generals immediately went to Lajos Badeni, the chief commander of Christian troops who was found in bed. They told him: they were coming! Badeni had just grasped the situation. Awakening from his dream, he come up with a thorough, thoughtful, perhaps somewhat complicated but tactically excellent plan. If they come, he says, we must go at them…

I do not think this was a politically correct sentence. True, the situation did not seem like that later. The battle, like all battles, went awry. All the infantry regiments were slain by the Turks. Especially from the freshly-formed Cologne regiment, writes an eyewitness, a Cologne infantry officer, who received a shock from the battle cry of the Mohammedans. They stood in one place, motionless, as they prayed to the Virgin Mary.

(Trick question: Recently, when at the Cologne Cathedral their daughters, their women, were raped, raped by migrants, what did the Cologne men do? They stood in front of a pub and tortured their German conscience because they were smoking, and the ozone hole would expand again?!) The battle went on for a long time — as war correspondents reported — until the united Christian armies, Austrians, Germans, Croatians, French and Hungarians won. In history this event is known as the Battle of Szentgotthárd.

Its memorial is proclaimed by the huge cross over Nagyfalu, that is, Mogersdorf (in German). Warning to the sky: if Europe is not careful, it will be soon nailed to the cross in a very politically correct way.