The annual OSCE conference in Warsaw is coming up next month, and the “Islamophobes” are preparing for the confrontations that lie ahead. The following article by Elisabeth Sabaditsch-Wolff was posted on Sunday at JournalistenWatch.com. Many thanks to JLH for the translation. 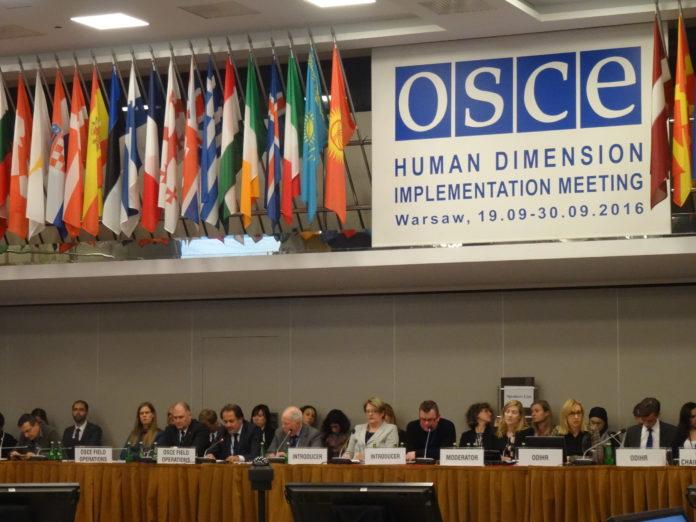 Again This Year, BPE[1] Will Defend Freedom of Expression in the OSCE Conference in Warsaw

Without doubt, there is a hot autumn ahead for Europe. Germany elects a new Bundestag on September 25, and Austria elects a new parliament on October 15. While the election in the north seems to promise (portend?) “more of the same,” the situation in Austria looks a bit different. At this point, several coalition variations seem possible among the three middle parties (SPÖ, ÖVP, FPÖ).[2]. Ultimately, the last four weeks will decide the election, even though polls now indicate a clear victory by Foreign Minister Sebastian Kurz’s “new” ÖVP. There is, to say the least, some doubt whether the chancellorship he aspires to will be able to re-invent the wheel. It is also not certain that a new coalition partner will be found. For now, we must wait out the “hot” phase of the election campaign, which begins in September, punctually at the beginning the school year.

The signs of storm and (political) upheaval are, however, not just national. Much will also happen on the international level. As every autumn, the OSCE’s Human Dimension Implementation Meeting (HDIM) will take place in Warsaw. As every year, an international delegation led by BPE will participate in the OSCE conference. The HDIM annually offers the opportunity to review the preceding twelve months. Naturally, the BPE concentrates above all on the areas of freedom of expression and assembly, and describes the ever increasing pressure on them. Especially Justice Minister Heiko Maas’s “Network Law” and the resultant loss of freedom of expression — both online and offline — are and should be of great concern. Anyone who believes that freedom of expression is under threat only in Germany need only look at Canada.

Since March 2017, there has been a bill in parliament there — the so-called M-103 — which “calls on the Canadian government to “develop a whole-of-government approach to reducing or eliminating systemic racism and religious discrimination including Islamophobia.”

It is interesting that the concept “Islamophobia” is not defined, while “Judeophobia” or “Christophobia” receive no mention at all. Should this bill become law, there will be a blasphemy law in Canada forbidding criticism of a religious system. Such criticism, however, is the right of every citizen in a nation of laws. Besides that, many Islamic scholars regard any criticism of Islam and its teachings to be Islamophobic and appropriate for prosecution. The fact that many Western countries in recent days and weeks have been hastening to convict Islam-critics — see Michael Stürzenberger in Germany as well as others in Austria — is a disgrace and a serious mistake.

As usual, the BPE in Warsaw will address these and other worrisome situations relating to freedom of expression. Also on the list of topics for the BPE are the continuing attacks by members of Antifa as well as other left-leaning and clearly violence-prone groups on people who differ politically. Year after year, The BPE also advocates for those who profess Christianity or other non-Islamic religions and are under pressure because of changing demographics. Clearly without freedom of expression there is no freedom of religion. Both must be defended. No Ifs, Ands or Buts.

This year too, of course, we can expect the usual complaints about the delegation for the defense of freedom. There will naturally be a collective howl about instances of rampant Islamophobia, which must by all means be prevented, even though it has been established in years past that no legal definition exists for this nonsensical concept. The BPE will also argue this year that the use of the term Islamophobia serves to reduce freedom of expression and must therefore be rejected. And of course, there is again talk of “hate crimes,” even though hatred is a (human) emotion and, as such has lost nothing on any list of what is forbidden. The BPE will speak out decisively against this attack on freedom of expression.

Year by year, the members of the delegation are appalled at how far the hollowing out of the freedom of expression has advanced. It is shocking to see how unaware people are of this loss. Because of modern media, the achievement of our forebears in winning the rights of freedom of expression and assembly have apparently been forgotten. Perhaps this is not so important to people nowadays. Perhaps the meaning of freedom of expression has been reduced to using a cell phone, posting photos to Instagram. But one day these people will wake up and recognize that they are no longer allowed to post or say anything that has not been approved by whomever. And then it will be too late.

Photo by the author

3 thoughts on “Defending Freedom of Expression at the OSCE”