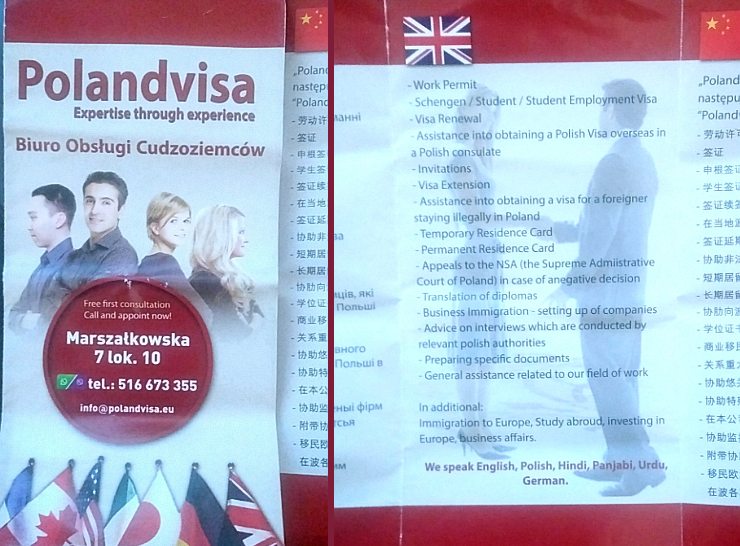 Below is a report from Green Infidel with the latest on the immigration biz in Poland. The Poles are far behind their western neighbors when it comes to cultural enrichment, but there are interests within Poland — both ideological and commercial — that are pushing the country to catch up:

Copies of the leaflet shown above are being widely distributed outside the immigration office in Warsaw, where foreigners (especially Indians, Pakistanis, Arabs and citizens of former USSR states) attempt to legalise their stay in the country. The leaflets are handed out by representatives of companies in Warsaw offering legal assistance to foreigners wanting to stay in Poland. This would also mean that they would have residency in an EU state inside the Schengen area. 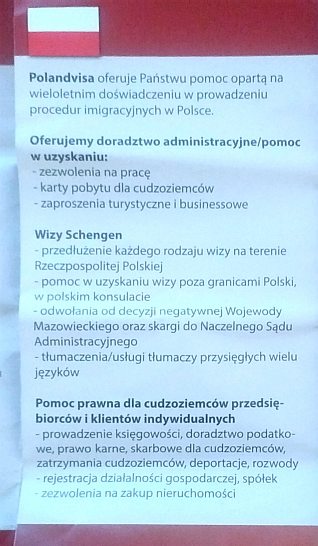 Interestingly, the Polish version of the text does not mention that assistance is offered to obtain a visa for a foreigner “staying illegally in Poland” — whereas this is explicitly stated in the English text.

An unimpeachable source of my close acquaintance, who has had experience of dealing with applications in the immigration office, has stated that there is a huge amount of false information in the applications submitted. This includes non-existent employers, false addresses or home addresses used by several hundred other applicants. In addition to this, the legal firms who assist the foreigners often exert much pressure towards government officials from the office.

My source also mentions that there’s sometimes pressure from management to give positive decisions to applications for residency — this is easier than a negative one (many pages of explanations are sometimes required). In spite of this, officials often do not need to look very hard to find the many errors, inconsistencies and falsehoods in the applications which then provide the grounds for a rejection of the application.

2 thoughts on “Come to Poland, the Gateway to the Schengen Zone”