Both the meme pics are from Matt Bracken. 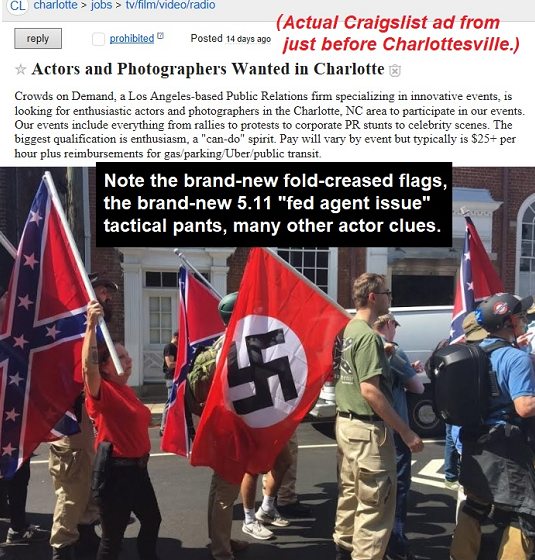 The following videos by Charles Patrick describe some of the events in Charlottesville on August 12, including eyewitness testimony. They not only support Matt’s contention that actors were hired and put on the streets to play the part of demonstrators, but that it may have been even worse than that.

The first video from Mr. Patrick is an introductory discussion of the eyewitness testimony that will be coming up in the interview from the second video.

I was tantalized by the glimpses of scenery out the window of his car, trying to figure out what part of Charlottesville he was driving through:

The second video is a lengthy interview with the eyewitness herself, who saw KKK, BLM, and Confederates getting off the same buses in full battle gear, ready to fight:

Based on her description, the restaurant she was in must have been on the Downtown Mall, with a back entrance on one of the alleys that open out onto 4th Street, where people were run over by James Fields’ car.

That means the buses she describes were not the ones shown in the photo on Matt Bracken’s meme pic, which appears to be on a street between Market and High, near the old McGuffey school, as near as I can make out:

So there were at least two batches of buses delivering “demonstrators” to the venue in Charlottesville. The batch that dropped its passengers near 4th Street had evidently co-opted a group of police. The witness doesn’t specify, but I assume they were state cops, and not Charlottesville city police.

As bad as state cops can be, I’ve never heard of any as bad as what she describes. It makes me wonder if these were actually some of the actors hired — could there have been Antifas, BLM, KKK, neo-Nazis, and cops, all hired for the occasion?

There are even more ominous explanations for what this woman saw just off 4th Street, but I’m trying not to think about those possibilities too much, because they’re quite alarming.

16 thoughts on “All the World’s a Stage”