This modern multicultural family drama near Dresden ended without serious injury, although it seems that the man of the house had to be restrained and perhaps sedated before being whisked away in an ambulance.

The report below, translated from Bild, was published earlier today at Vlad Tepes in a slightly different form. Egri Nök, who translated the piece, says, “Nothing to see here — just your daily dose of the new normal in Germany.” 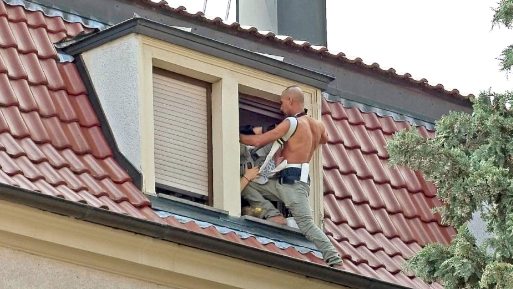 Caption: Ahmed E. (26) has already got one leg on the roof. He allegedly threatened to jump with the child. Photo: Martin Lacher

Heidenau [near Dresden] — The picture is blood-curdling. A man is climbing out of an attic window, one leg already on the roof. He has got his eight month old baby in a carrier in front of his belly. The mother is pulling at it desperately. To prevent her child from falling.

A neighbour was photographing the scene: “I was walking my dog when I heard cries for help. The woman yelled, ‘Put the knife away.’ Then the man appeared in the window, with the baby.”

Shortly thereafter police storm the attic apartment in Haeckel Street in Heidenau. The officers pull the child back into the apartment, then the man. Earlier, before noon that day, police had had to remove Ahmed E. (26) from his partner’s (Daniela N., 36) apartment.

The asylum seeker from Morocco had to hand over the apartment keys, and — as he appeared to be completely beside himself — was taken to a psychiatric hospital. But he escaped from there, returned to the house, and climbed in through an open window of a ground floor apartment. The tenant was unable to stop him, he tells Bild: “He had a switchblade knife.” 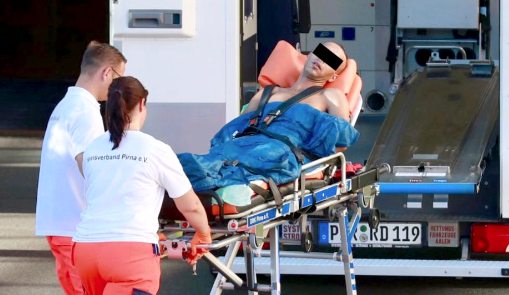 Caption: Following the arrest, the Moroccan was taken to hospital. Photo: Marko Förster

An unsuspecting Daniela opened the door again for the father of her child, at which point he allegedly beat her and threatened her with the knife. Then he seized the child. Mother and child were taken to hospital. “I never want to have anything to do with this guy again,” says Daniela N.

On Tuesday it was announced that the prosecutor issued an arrest warrant for the 26-year-old on suspicion of dangerous battery, criminal mischief, trespassing, and threat. There will be an investigation for [attempted] child murder. But according to the spokesman, there are doubts that the man indeed intended to kill the child.

11 thoughts on “All in the Culturally Enriched Family”