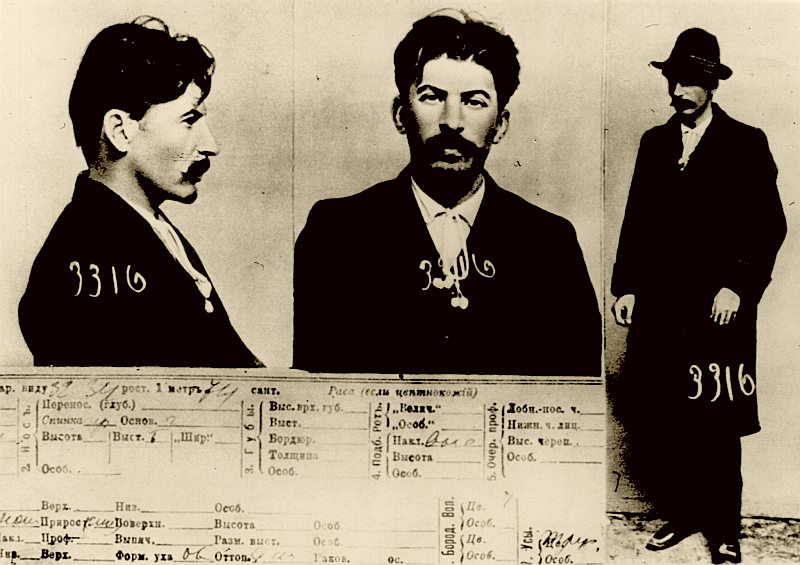 1911 mug shot of Iosif Vissarionovich Dzhugashvili, a.k.a. Joseph Stalin, from the Okhrana archives (click to enlarge)

Like many other Bolshevik revolutionaries, Joseph Stalin was arrested and exiled to Siberia numerous times between the 1905 Revolution and the October Revolution. Yet on each occasion he managed to escape and return to his revolutionary activities in the Caucasus and elsewhere. In one incident, he was not among those detained during the mass arrest of a group of Bolsheviks that would otherwise have included him.

In later years Stalin played down his prowess at escaping detention, understating the number of times that he eluded the clutches of the Okhrana, the Czar’s secret police.

These facts have fueled persistent rumors that Stalin was an agent for the Okhrana between 1905 and 1917. Most historians both inside and outside of Russia believe that there is no merit to the stories. All documents and letters that appeared to confirm Stalin’s work for the Okhrana have turned out to be forgeries. Nevertheless, the rumors persist.

One of the reasons that the story has gained traction is that there were numerous agents of the Okhrana among the Bolsheviks. Lenin was generally aware of them, and sometimes turned them, so that they became double agents. The stories about Stalin assert the same thing about him, that he acted as a double agent.

The legends are further complicated by the fact that all the prominent “Old Bolsheviks” who might have confirmed or disproved the rumors were gradually executed during the purges in the 1930s — the same people who were successively retouched out of group photos that included Stalin. The resulting lacunae in the historical record mean that there may never be a definitive answer to the question.

After the revolution, the Bolsheviks took over the apparatus of the Okhrana, retaining its most useful operatives, and expanded it into the infamous Soviet secret police organization that was eventually designated by various acronyms — Cheka, GPU, OGPU, NKVD, NKGB, MGB, and KGB. It was more brutal and effective than anything the Czar could have devised.

The above story is relevant to Thursday’s discussion about the infiltration and manipulation of conservative groups by the Deep State.

The Soviets became the most efficient practitioners of counterintelligence at least in part because they had been so thoroughly infiltrated before the October Revolution. Because the Bolshevik leaders — especially Lenin — were well aware of that fact, they were able to develop an effective counterintelligence regime. When they assumed control of the state, that expertise in counterintelligence was extended and expanded, reaching its apogee in the KGB.

In contrast, much of the right wing in the USA — possibly due to its peculiarly American nature — seems unaware of and uninterested in counterintelligence. Does the absolute certainty of infiltration seem so unimportant?

As is often the case with such discussions, the back-and-forth exchanges in the comments section of Thursday’s post provided additional food for thought. The following points are based on responses that I made to fellow commenters:

44 thoughts on “Agents for the Okhrana”