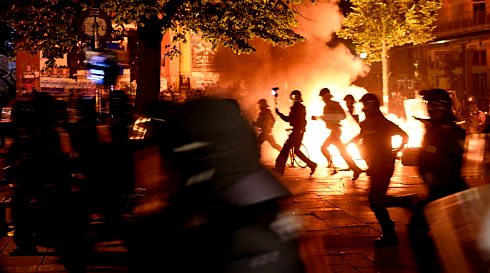 After last week’s ultra-violent demonstrations in Hamburg during the G20 summit, it is the Hamburg police who are being targeted for “police brutality”.

The video below shows the mayor of Hamburg apparently supporting the police against the charges that are being leveled at them. However, the mayor happens to be a member of the far-left lawyers’ group that initiated the proceedings against. In other words, he’s part of the Red Cabal that is targeting the police. Butter wouldn’t melt in his mouth.

Much of the material below was collated and translated by Nash Montana and Egri Nök, and was previously published at Vlad Tepes in a slightly different form.

The latest news includes a video featuring the mayor of Hamburg talking about legal action initiated against the police. PolitikStube describes what’s happening in Hamburg now (translation by Nash):

Things couldn’t be any more disgusting: G20 investigative procedures have been initiated against more than 30 police officers.

There are currently more than 30 charges against police officers for “battery” of anti-G20-protesters in Hamburg. The mayor of Hamburg, Olaf Scholz, has been defending the police in public, as seen in the video below — while at the same time, he is a member of the very same far-left attorneys’ organization that is pressing charges against the officers.

Thanks to Nash for translating the video, and to Vlad for the subtitling:

We reported last week on how the far-left attorney organization “Anwaltsverein (RAV)” is providing free legal services for arrested black block members — and that mayor Olaf Scholz is a member of that organization.

While Scholz stands behind Hamburg’s police in public, the Anwaltsverein have today issued the press release below, accusing police of violating human rights and police brutality. They are the “Association of Republican Lawyers”, or Anwaltsverein (“Lawyers’ Association”) for short. They have this dry name, and they present themselves as a civil rights group, but they are a far-left organization of criminal defense lawyers, specializing in defending left-wing extremists, and also “refugees” of the left-radical kind.

They were the de facto organizer of the anti-G20 protest. An attorney’s office that belongs to Anwaltsverein was the organizer of the “Welcome To Hell” event that escalated so badly on Thursday of last week, and a sub-organization of the RAV, “Legal Emergency Service”, provides free legal defense for arrested rioters.

The Mayor of Hamburg is member of the Anwaltsverein (RAV).

The discrepancy in all of this is completely ignored in the German press.

An unreserved and detailed clarification is called for. We note that:

During the protests, police justified their actions by partially unsubstantiated narratives and by prognoses of danger, which in hindsight often turned out to be wrong. In most of these cases, a correction by the police is still pending.

At the same time, it is unbearable the extent to which politics and police in hindsight have dealt with what happened. Instead of an open, self-critical reworking of the from the ground up of the authoritarian-repressive proceedings against the protests, and the excesses of violence by some police units, there is a reflexive defense, even glorification, of police work. The complete absence of a culture of mistakes [Fehlerkultur — I have never heard that word before, they must have invented it — translator] does not even embolden police officers in their illicit and culpable proceedings. There is now a de-facto ban on criticizing the police, which, as the executive holds the monopoly on force, suspends one of the basic foundations of the rule of law: those who have special warrants for the use of force must be permanently and intensively controlled by society and the other powers. All else is the path towards the authoritarian state.

“Politics fuels a picture of society which puts whole groups of persons outside the rule of law, and therefore denies that basic rights are for all. We call this Enemy Penal Law,” announces Franziska Nedelmann, attorney and vice-chair of the RAV.

G20 riots: An all-round carefree package for the Black Block

The Black Block in Hamburg had their own paramedics, and a network of attorneys working for them during the riots; the mayor of Hamburg is a member of that network.

[See the earlier video of the attorney for Rote Flora.]

Beuth is a criminal defense attorney, a legal representative of the Rote Flora, and functioned as the speaker of the Black Block at the G20 protests.

He has been defending accused parties against the city of Hamburg in high-profile cases since the ‘90s, for example, Antifa members who were accused of attempted murder (Plattenlegerprozess), Somali pirates who had hijacked a freighter under a German flag and therefore had come into German custody (Piratenprozess), and militant “refugees” (Lampedusa case), to name a few.

The Rote Flora, of which Beuth is the legal representative, opened in 1888 as “Theater Flora”, and has been a squat since 1989. The Hamburg senate could never bring themselves to evict the red squatters.

Officially a “cultural centre”, it is a hub of Antifa and “Autonomen” (Black Block), and the scene of increasingly brutal clashes with the police on a regular basis. 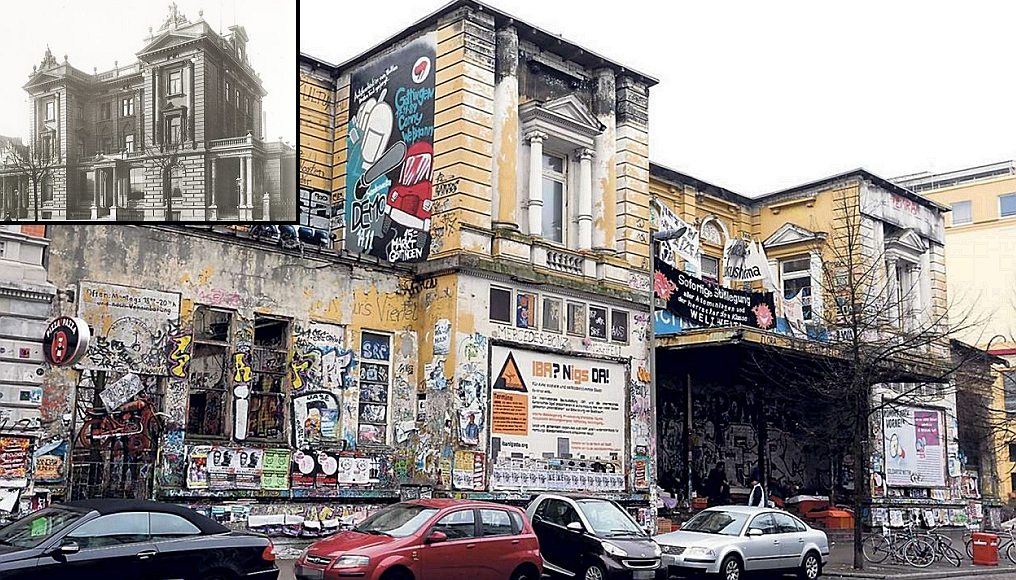 The Rote Flora, then and now

The Schanze was the scene of the most severe clashes with police during the anti-G20 riots on Friday night. “Protesters” positioned themselves on roofs of buildings, and threw stones and Molotov cocktails on the police, as filmed here from a police helicopter with an infrared camera:

[See the infrared video of protesters throwing Molotov cocktails and rocks from roof in the Schanze.] 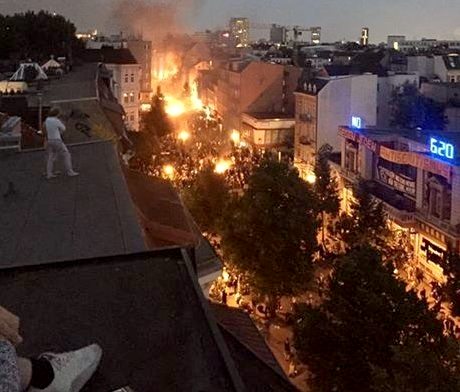 The riots at Schanze Friday night, seen from a rooftop, on the right the Rote Flora with the Slogan “NO G20”

This was when the police had to retreat, which left residents defenseless against looting and arson for an hour or two, until special forces were able to move in at 11:30 PM and take back the Schanze, house by house, street by street.

Just a bit further down the street from the Rote Flora, there is the attorney’s office Schulterblatt 36.

Schulterblatt 36 are the legal representatives of the anti-G20 protest “Welcome to Hell” on Thursday, the event where the escalation of violence began.

Watch the rain of bottles and stones going down on the police, while the protesters’ loudspeaker van announces that the police are “out of control” and “attacking” a peaceful legitimate protest:

[See the video of Antifa violence.]

Should you find yourself being arrested for attacking an officer, no worries; there is a help line you can call, the “Anwaltliche Nothilfe” (“Emergency Legal Aid”).

This “Legal Emergency Aid” was specifically set up for G20 protesters by the “Anwaltsverein”, the far-left attorneys’ organization, and the “Rote Hilfe” (“Red Help”, a far-left prisoner support group). The website for the “Legal Emergency Aid” is multilingual and in English, as protesters were expected from all across Europe, and they describe their work at the G20 as follows:

Lawyers from the Legal Team will be present at demonstrations and other protest actions to support participants in realizing and protecting their basic rights and, if necessary, to represent them vis-à-vis the police.

One central task of the Legal Team of Lawyers will be the representation of persons detained in the context of the protests against the summit in Hamburg. To fulfill this task, the Legal Team will be present at demonstrations and protest actions, but also in the detention centers (Gefangenensammelstellen, GeSa) in order to advise those detained and to represent them, above all in court hearings concerning their detention.

But the service does not end with legal aid. According to a spokesman for the firemen, the protesters had their own paramedics at the protests, and were treated in a base hospital in the Rote Flora, if necessary.

Obviously, the idea behind this is that when you are injured in a violent confrontation with police, you do not want to show up in a hospital, where you will be identified.

The “Anwaltsverein”, who are behind the Emergency Aid, describe themselves as a civil-rights organization. Note how bland their website is, although a closer look reveals how it specializes solely in defending political extremists and criminals, and how they choose non-suspicious names for their endeavors, such as “Anwaltsverein”, (“Society of Lawyers”), “Anwaltliche Nothilfe” (“Legal Emergency Aid”), and even the almost governmental-sounding “Ermittlungsausschuss” (“Investigative Committee”).

But they have just been declared “dangerous” by the Hamburg police (Hamburger Abendblatt, July 7, 2017)

It will hardly surprise anyone who is familiar with circumstances in Hamburg that a daily newspaper such as the respectable Hamburger Abendblatt employs a member of “Anwaltsverein” as a contributing writer, and gives the “Legal Emergency Aid” a video platform to attack the police.

And it won’t surprise you either, then, that that the mayor of Hamburg, Olaf Scholz (SPD, Social Democrats), is a member of the “Anwaltsverein”, too.

5 thoughts on “Violent Anarchists, Red Lawyers, and the Mayor of Hamburg”