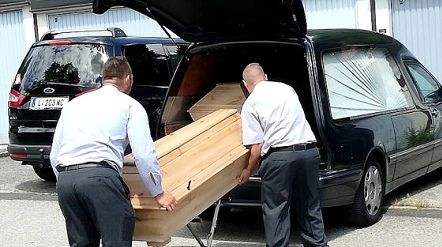 Yesterday a culture-enricher brutally murdered an elderly couple in the Austrian city of Linz because the FPÖ, an immigration-critical political party, had hurt his feelings.

I don’t know how it is in Austria, but in much of the rest of the West the Gutmenschen would blame the FPÖ for this incident. The party’s “extremism” and “xenophobia” would be seen as the decisive factor in the perpetrator’s decision to stab, club, and burn his victims. The general rule is that right-wing politicians are always responsible for any bad thing that happens, and immigrants are never to blame for their violent deeds.

Linz: Tunisian kills couple out of hatred for FPÖ

After the brutal murder of an elderly couple early Friday morning in Linz, the motive for the crime is now resolved: The suspect — a 54-year-old Muslim from Tunisia — committed the carnage out of hatred for the FPÖ [Freiheitliche Partei Österreichs, Austrian Freedom Party], according to police. He projected many bad experiences that he had had over the past couple of years in Austria onto the party, and wanted to set a warning example.

So the bloody double homicide in Linz had a political motive, as the National Police Director for Upper Austria Andreas Pilsl explained in an off-the-record-conversation on Saturday afternoon.

The double homicide suspect, who had been living in Austria since 1989, was sentenced for animal abuse in 2012, following a complaint by a local FPÖ alderman. From that moment on, he blamed the FPÖ for all negative personal experiences; for example, when, in his opinion, he was treated badly at the job centre, or once when his benefits were cut.

Alleged that the victims were close to the party

The suspected double murderer alleged that his two victims were to connected with the FPÖ — which in fact wasn’t even true, according to Pilsl. The 54-year-old suspect accurately planned his deed, even though he knew that the two pensioners were not responsible for his situation, according to the National Police Director.

The deliveryman regularly delivered organic groceries to his two victims, and at the scheduled delivery date on Friday, he hid a belt, a wooden club, a knife and a canister of gasoline under his apron. According to the current state of investigations, first he strangled the 85-year-old, after which he attacked the husband with the knife and the club and killed him. Then he set fire to the kitchen of the family home. The emergency services discovered the corpses of the elderly couple during the firefighting operation.

Suspect turned himself in

Not long afterwards the 54-year-old suspect turned himself in to the authorities. During the interrogation, he at first said he that he had considered drowning himself in the Danube, but then made up his mind to go to the police. There, he had to wait until it was his turn. Finally, he confessed to the officers that he had murdered the 85-year-old woman and her husband, who was two years her senior. According to information available to Krone, the two had even assisted him financially up until now, because his organic grocery store was not doing well.