Below is a more detailed account by Egri Nök of yesterday’s jihad terror attack in Hamburg, drawn from information supplied at a police press conference earlier today.

This post was published previously at Vlad Tepes in a slightly different form. 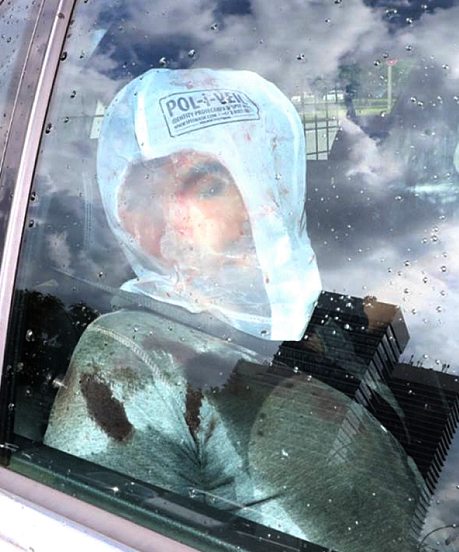 Hamburg Terror: Report from the Joint Press Conference of the Interior Senate and the Police of Hamburg

For a detailed account of the attack jump right to the statements of Ralf Martin Meyer, Police President of Hamburg, and Hennings, leader of the Investigation Team.

For background on how and why he was known to security authorities, jump to the statement by Torsten Voss, Office for Protection of the Constitution.

One dead, seven wounded, partly gravely; a random “barbaric” knife attack in an everyday situation that could have hit any of us.

What makes it worse is that the perpetrator came to our town asking for our protection.

Thank you to the citizens who detained him; they were very courageous and determined.

The Department of Public Prosecution is leading the investigation. The perpetrator was known to the intelligence agencies; they had evidence of radicalization. There was contact with him, talks by the State Office for Criminal Investigations and the Federal Office for the Protection of the Constitution.

He was not seen as immediately dangerous. But he was classified an Islamist, not a Jihadist.

It was a random attack with primitive equipment at a random place. We do not have any clues at the moment that there were others involved; we assume a single perpetrator, psychologically unstable.

The perpetrator was obliged to leave the country; he did not object to his asylum application’s being rejected, and he was cooperative in getting new passport. Only yesterday he spoke to the aliens registration authority. The Palestinian National Authority was willing to issue new papers for him, so we were expecting him to leave soon.

The city must stand together. We must confront the hate that manifested itself in this deed. We must not let fear rule our daily lives. We should probably adapt a combative attitude like the citizens who detained the perpetrator.

Thank you to the doctors fighting to save the lives of the wounded and comforting their families.

We received the first call at 15:11, the act had occurred at 15:10. The caller said a person was attacking people with a knife in the Edeka supermarket on Fuhlsbütteler Street. We immediately sent officers. It was unclear at that point whether it was amok or terror. After Munich, the concept for such situations was changed: the patrol cars were equipped with protective armor. The first officers who arrived were plainclothes officers; they saw men at the Hellbrookstraße surrounding one person, and as the situation was unclear to them, they fired warning shots. Then they determined that the person attacked was the perpetrator. They handcuffed him and called for an ambulance, as the perpetrator evinced head injuries.

The perpetrator had attacked people in the supermarket and on the street when he was fleeing.

A mobile task force began a manhunt, as it was unclear at that moment how many attackers there were.

It quickly became apparent that the perpetrator resided in the refugee accommodation Kiwittsmoor in the district Hamburg-Ochsenzoll.

There was one mortally wounded victim in the Edeka supermarket, and five wounded on the street who had to be taken to hospital.

It quickly became apparent that he was a single perpetrator. This does not exclude the possibility that there might be instigators in the background.

Statement by Hennings, leader of the Investigation Team

The attacker went to Edeka and bought sandwich toast. Then he left the supermarket, entered a bus, but immediately left the bus again. It is unclear why. He then went back into the Edeka supermarket at 15:10, and 15:11 police received the first call for help. He went straight to a shelf for a kitchenware company and took a kitchen knife with a 20cm long blade from it, tore it out of the packaging, ran towards the victim, who later died, and attacked him brutally, without any prior warning at all. He then attacked the person next to the first victim and wounded him most seriously. Then he went to the entrance and attacked another male person, 19 years old, wounding him gravely.

After he had committed these three crimes in the supermarket, he left and bumped into two people who were standing at their bicycles, and attacked and wounded both of them, and then wounded another female cyclist, but not with his knife. Then, he attacked another, a 64 year old man, and badly wounded him.

At this moment citizens who had been witnessing what was going on began pursuing the perpetrator and attacking him with objects. At the same moment the plainclothes officers arrived. All this happened within a few minutes.

A district attorney was promptly sent to the crime scene. The district attorney immediately requested a search warrant for the perpetrator’s accommodation, which was quickly granted. At the search, no weapons were found. There was an inquiry made of the criminal database; the perpetrator has one entry for a supermarket theft in April 2017, which was dismissed due to paragraph 153 pettiness.

The perpetrator is being presented to the committing magistrate right now. We have requested an arrest warrant for murder and five counts of attempted murder. He appears mentally unstable. He has not yet commented on the crime, because he has bad headaches due to the arrest.

Statement by Torsten Voss, Office for Protection of the Constitution

The accused is one of 800 suspects we have classified as ‘Islamists’ in Hamburg; but we have not classified him as a ‘Jihadist’.

An acquaintance of the accused contacted police. He was worried by changes that he had seen in the suspect. The police passed this information on to us, and we spoke to the whistleblower. The whistleblower told us that the perpetrator had been partying and drinking alcohol, but suddenly stopped doing that, and started talking about the Koran. This worried him so he wanted to speak to us.

The accused has excellent command of English and Norwegian, but not of German. When we spoke to him we had the impression that he was a mentally disturbed personality, but not immediately dangerous.

Afterwards, it became apparent that for example he had loudly recited Koran suras in refugee cafes, and the manager of the refugee accommodation where he lives contacted us, too.

So we instructed police to conduct a psychological evaluation. The evaluation concluded a mixed form of mental instability and religious radicalization. We wanted to have him examined at that point. He is not a member of the local Islamist scene. We do not have hints of a network. He seems to be a single person, living in Hamburg on his own, who suddenly changed. He had mixed opinions about living in Hamburg. At his most recent visit to the Aliens’ Registration Authority, he absolutely wanted to leave Germany.

DA Grösser: He is ethnically Palestinian. Did not have a passport with him, but a birth certificate showing that he appears to have been in the UAE. He was sent to the “Palestinian Mission” in Berlin twice. They indicated to us that they were ready to accept him as a Palestinian and issue papers for him. He was cooperative in that. We were indeed expecting to shortly receive papers for him. The final approval of the Palestinian Authority in Palestine was missing. This whole process takes a few months.

Q: You spoke to him and saw a radicalization. Was he seen as a “risk”?

Grösser: He had not been that long in Germany and in Hamburg. We have clues from the whistleblower, and our own impressions, but we rather tended towards mental instability, rather than religiously motivated. The aggravation of ‘Islamist’ is ‘Jihadist’, but he did not fall into this category. ‘Risk’ is a police term.

Meyer, Police: He did not reach the category where we have to take concrete measures. His cooperation regarding his papers was commendable, so we did not assess him as being a ‘risk’.

[Name]: He came to Germany in 2015, from Norway. Before that he had resided in Sweden and Norway. He arrived in Dortmund and was distributed to Hamburg, arrived here in March 2015, and applied for asylum in May 2015. As he had come via Norway, Sweden and Spain, he told us that he expected better perspectives here, as he was told in Norway that he did not have any chance for asylum there. As he had his birth certificate with him, we do not have reason to doubt his identity. His application for asylum was rejected in November 2016; the deportation process has been ongoing since.

Hennings: Yes, we have his mobile phone, from one of the several crime scenes, but also mobile phones from his accommodation. Extensive material that we will analyze.

21 thoughts on “The Hamburg Mujahid: A Lone Wolf, and Mentally Unstable”