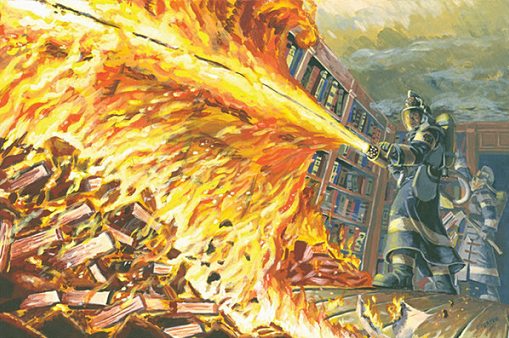 In Sweden, children’s books featuring the beloved fictional character Pippi Longstocking are facing the same fate that befell Tintin some years ago in France. Those that have not yet been bowdlerized to bring them up to 21st-century PC standards are in the process of being removed from the shelf and recycled.

As this process becomes more and more advanced, all the published works available to children — those few who actually read books — will be filled with nothing but the cant of the Cultural Marxists who now dominate Western society.

No more Huckleberry Finn. No more “Amos ’n’ Andy” from Netflix. No more statues of Robert E. Lee and Stonewall Jackson. The Triumph of the Multicultural Will is nearing its utopian realization.

Many thanks to Tania Groth for translating this article from Fria Tider:

The journalist Janne Josefsson accuses Botkyrka municipality’s library of burning Astrid Lindgren’s earlier books for leftist ideological reasons. Now the municipality acknowledges that the books are being recycled because they contain “racism”, as written in a press release.

In “Summer in P1”, the journalist Janne Josefsson claimed that the municipality of Botkyrka is burning older editions of Pippi in the South Seas.

“When you burn books for ideological reasons, there’s something in me that says, ‘Wait a bit, do we really want these to disappear. Shouldn’t a few remain so that I can tell my child that what the views were at the time?’” says Josefsson to Expressen.

Now the municipality’s library admits that they have thrown the books away for recycling. This is because the books contain “racist” expressions.

But Janne Josefsson does not buy that excuse. He tells Expressen that the difference is that Botkyrka discards the books for ideological reasons and because of an “intercultural policy”. According to Josefsson, the municipality is only trying to camouflage its behavior. He believes that the books should have remained and that the library could have discussed the books if they find the content so terrible.

33 thoughts on “That WAYCIST Pippi Longstocking!”