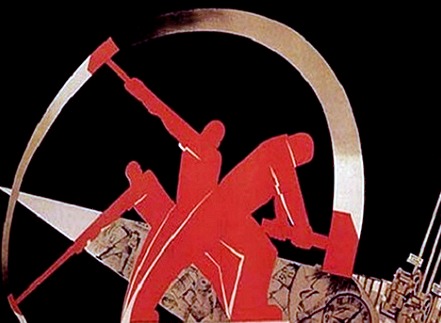 The latest idea from the Socialist Party in Germany: Compel the long-term unemployed to work for zero pay, in order to prevent their children from growing up to be unemployed themselves.

Many thanks to Nash Montana for translating this piece from Compact online:

Unfortunately, this is not satire: By way of humiliation of recipients of Hartz-IV [the final stage of a series of government reforms in German unemployment and welfare benefits], their children will be injected with a maximum fear of unemployment. A slave project from the house of the SPD, the idea is that the “ineptitude” of their parents must not be “inherited” by their children!

Last year the minister of employment Andrea Nahles (SPD), tried to top her ridiculous idea of the one-euro job by offering 80-cent jobs to refugees. And now for the coming year, this cynicism will be surpassed with a brand new ridiculous idea: With the cooperation of the Department of Labor (BA) in Bremerhaven, Nahles wants to start a pilot project in 2018: 3,000 long-term unemployed people will have to work for the common and the corporate good! Hourly pay: Zero cents!

You read that right: These slaves will have to work for three years without a claim for compensation, for the value of the Hartz-IV amount [€391 per month for a single recipient]. State-sanctioned existence on a pilot light as compensation for hard work. Whoever refuses to do so, will have his “basic insurance” stripped down. Nahles’ partner in this project is the head of the department for labor, Detlev Scheele. It’s probably interesting to note that he also is a bona fide member of the SPD.

The managing director for the Department of Labor, Susanne Ahlers, loudly propagandized that unemployed people can be integrated back into society through these slave jobs. That in this manner they could also proudly show their children: Look here, I, too am adding to the general well-being of the common good!

What happens if the offspring should ask why the parents aren’t being paid for their work?

Wrong question, since the uncompensated slaving away — as we further learn — is meant to prevent the children of unemployed parents from growing up to be unemployed as well, so that the need for Hartz-IV cannot further — verbatim — be “inherited”… Unemployment, a result of failed policies, therefore is now defined as an inheritable genetic defect. Such discrimination through the biological use of metaphors and imagery has not been indulged in around here since 1945.

The main thing is the message that is being conveyed to the children of these slaves: If you do not accept whatever dirty undesirable job that comes along, then we will make an unpaid worker out of you, a slave, like your worthless father or your worthless mother. It is economic shock therapy for the little ones. And since children often identify with their parents, they will be broken and be beaten into spineless human capital.

That said, this new slave project has additional advantages for the “free” market: Because of course corporations will save money in wages. They don’t even have to pay the ridiculous “basic insurance”. No, because that’s what the Job Center pays for — which of course means, the taxpayer pays for it.

And this is where we have arrived after the installment of job-creation measures for first generation Hartz-IV recipients — who can still remember the idiotic “I&AG propaganda”? — we now have arrived at bare bottom: For the unemployed it’s going to be hell, and for the still-employed it’s a threat to tremblingly endure Germany’s metamorphosis into a low-wage country.

This pilot project by the SPD isn’t even a betrayal of their clientele — it is instead an outright spitting in their faces. But there is reason to be concerned that even this perversion, should any protest against it remain silent, will be surpassed by yet another, even more insane, one…