The leader of a far-left party in Poland is calling for intervention by trans-national organizations to stop new legislation that is being passed in parliament by the country’s conservative government, which holds the majority.

The following article about what happened yesterday is from the conservative news site wprost.pl. Ava Lon, who translated the piece, includes this introduction:

The Polish Parliament is voting in laws that the Left hates. Therefore the progressives have decided that the laws are “unconstitutional”, and that foreign powers must intervene to restore democracy in Poland.

Under the PiS (Party of Law and Justice) government, the Polish Parliament is now majority-conservative. It is changing the structure of the judiciary. The Left is foaming at the mouth. Now they have suggested (based on the presence of protective barriers around the Parliament building — as in most countries in the world nowadays) that the ruling party will “use force” to implement the law.

Ryszsadr Petru is the leader of a far-left party called Nowoczesna. He is making appeal to the OSCE, among other international organizations, to stand in solidarity with him and protect the rule of law.

Note: the letter in question is pictured in English in the text.

Ryszsadr Petru wrote a letter to “his friends all over the world” calling for solidarity concerning judiciary reforms in Poland.

[Tweet] The Democratic World (UN, Council of Europe, OSCE, EU) can not be indifferent to the authoritarian rule of PiS.

We appeal in defense of your law! 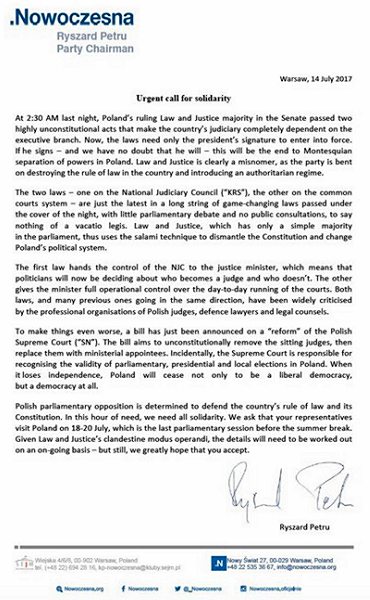 “PiS is capable of enforcing the law by military means”

“I am aware that PiS is prepared for everything. The Sejm [Polish Parliament] is fenced off by railings. From what I’ve heard, there is a rented company that can equip the hall in stereo within three hours,” said Ryszard Petru in Koszalin. “PiS is able to enforce this law manu militari. Hence my appeal to world institutions concerned with the rule of law, asking them to appear as delegations monitoring the process of the rule of law in Poland,” he added.