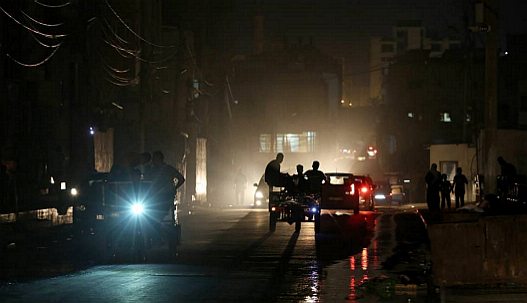 The following article from the Swiss daily Neue Zürcher Zeitung describes the desperate, fetid circumstances into which the Gaza Strip has recently sunk, and investigates the complex reasons behind the current situation.

Here is a Schweizer look at the innards of the “Palestinian Question” — a clue of how more-than-byzantine life and politics in Arab-dominated North Africa can be. It is also a glance into the psychology of the Europe which lately almost uniformly condemns Israel in its contentions with the Palestinians.

I love the last few sentences. How much did Western Europe sympathize with the plight of the Serbian people when American air power was blowing them up? They were the enemy, weren’t they?

It Stinks to High Heaven in Gaza

Mahmoud Abbas, the Palestinian president, wants to bring Hamas to its knees. That is why he is allowing the residents of Gaza to suffer. The sewage treatment plants have stopped working, because there is no longer enough electricity. Israel is doing nothing to prevent that.

It stinks to high heaven. Truly infernal steam clouds rise from the ocean at Gaza. Children hold their noses. Adults hold handkerchiefs to their faces. Anyone who can, hastily leaves the area of the stench. Fishermen stare sullenly into the sloshing green-gray that forbids the casting of nets. Until now, the sea was the only escape for the caged Gazans — the only place that spoke of freedom and the wide-open spaces. Now that is gone too. Gaza the prison has become definitively unbearable.

It stinks because six of the nine pumps that move sewage into the treatment plants in Gaza city, are out of order. So now that brew is being directed into the ocean, where it lends the water a poisonous, grey-green tinge, which turns up as far as the Israeli beach of Zikim, now closed by the government because of “fecal” contamination. Yet more and more people in Gaza are going swimming.

Abbas is Making Use of Weakness

The Gaza sewage treatment plants are out of service because there is not enough electricity any more. And there is not enough electricity, because Palestinian President Mahmoud Abbas has decided to bring Hamas to its knees. He wants to do that now because he has concluded that his enemies in Gaza have never been so weak. So he has cut the salaries of the officials in Gaza and asked Israel to cut electricity by 40%, since Hamas is not paying the bills. Israel complied.

So who is responsible for this misery? For Israel’s critics around the world, it is the government in Jerusalem, which from the perspective of the UN General Assembly, of the International Committee of the Red Cross, and of many other human rights organization, has occupied the Gaza Strip and is therefore bound by the obligations laid on occupying powers by the Hague Convention. Thus, a general responsibility for the security and welfare of the civilian population is postulated. For its part, Israel points out that it has withdrawn its armed forces, exercises no authority over the area or its institutions and is therefore not an occupying power. For Hamas, the primary guilt lies with Israel, secondary with Abbas. If you ask the residents, the responsible parties named often are Abbas and Hamas — Israel only seldom. The citizens of the Gaza Strip are hopping mad at their Islamic regents. In the winter, also because of the electricity, it came to the biggest demonstration since 2006.

Meanwhile, the situation has become untenable. Not since the war of 2014 has the Strip been such a mess. In the streets between bombed-out and half reconstructed buildings, refuse piles up and is no longer removed. In this picture of misery, there are bright spots such as well-cooled restaurants complete with sushi and green tea, or flower shops with a colorful, well-watered selection. This does not testify that “it’s not half bad here,” as is often said, but simply to the spirit of improvisation and bravery of the residents.

The actual provocateur is Abbas. The Palestinian head controls an important switch point. Because Israel does not officially deal with Hamas, the autonomous authority in Ramallah is middleman. It pays the salaries of the idle officials in Gaza, the bills for electricity, water and fuel, as well as medications that go to the hospitals in Gaza. But now Abbas has pulled out the thumb-screws. In early summer, he demanded that Hamas surrender governance of Gaza to him. The scornful refusal gave him the desired excuse to drive the crisis to its high point. In the hope that the population would rise up against its oppressors. This expectation was not exactly crazy. The weak are often bitten.

Water From the Cistern Wagon

But Gaza’s harassed subjects did not do Abbas that favor. They are too tired, beaten down, occupied with simply trying to survive. For Maher Salem, they are “heroes.” The General Director of Water and Sewage Management in Gaza city has maintained a happy disposition, despite the continuing misery. “That’s my way of dealing with the pressure.” He has the numbers at hand, even though he emphasizes that they change daily. On the average, residents get 19 hours of electricity a day. Instead of the previous 120 megawatts, Israel is now supplying 70 megawatts, as Abbas asked, and therefore reducing the amount of electricity. This embitters Maher Salem: “Abbas doesn’t usually have Netanyahu eating out of his hand. But now Netanyahu is doing as he is told. What a disgrace!” The only power plant in Gaza gets hardly any diesel and delivers only 50% of what is needed. Gaza’s groundwater is contaminated by chemicals and sewage. For months, Zahra Mustafa, a housewife from Khan Yunis, has been walking two kilometers to the mobile cistern wagon and rolling her 20-liter canister home on a wobbly cart. The Mustafas cannot afford plastic bottles of water. Water from the tap is greasy and salty. They use it for showering and for their plants. They won’t even make their donkey drink it.

The groundwater yields about 50 million cubic meters annually, and the need in the Gaza Strip is for at least 200 million cubic meters. So water must bought from Israel. Mekorot, Israel’s water company, pumps five million cubic meters to Gaza annually. Maher Salem would consider fifteen million cubic meters about right. There are three desalinization plants. Two of them work well, but not without electricity. So when those people in need hear that Jerusalem has just concluded an agreement with Ramallah for delivery of water, they are bitter. West Jordan [the West Bank] is to receive 22 million cubic meters and Gaza 10 million. In and of itself, this is good news. But it could be years before it reaches that point.

Hamas is Giving Itself a New Look

Hamas is aware that this is for all the marbles. It is taking countermeasures. In the spring, it presented its new charter — an attempt to strip away its image as a terrorist organization and show itself as a resistance group. The Two-State Solution is implicitly welcomed and the PLO recognized as the legitimate representative of Palestinians. Most important, though, is the distancing from the Muslim Brotherhood, Hamas’s mother organization. This constitutes a direct approach to Egypt, whose President Abdel Fatteh al-Sisi is hounding the Brotherhood mercilessly.

The reason for the change, of course — Hama’s isolation had simply become too oppressive. Not one Arab statesman protested when Donald Trump equated Hamas with the terrorist militia ISIS. Then, when even Qatar found itself in Riyadh’s crosshairs, the alarms sounded in Gaza. From that point on, for Hamas, it was about its very survival.

And lo and behold — Cairo showed interest. We are sitting with Mahmoud al-Airami, vice director of the University of Palestine in Gaza. Airami has seen much of the world. He studied in Simferopol[1], “fought side-by-side with Yasser Arafat,” his respected role model. He takes the title “general” and appears to have an intimate acquaintance with the renewed approach to Egypt. Big things are happening, says Airami. He had just been with a four-person Hamas delegation led by Prime Minister Yahya Sinwar, in Cairo. It had been agreed “to make every effort” to open the border at Rafah again, for 24 hours every weekday. Egypt is willing to deliver diesel. Trade should flourish.

Airami never tires of singing the praises of Yahya Sinwar. Yet if Hamas really succeeds in breaking out of its isolation, the credit is due not to the head of government, but to one of the flamboyant figures of the Palestinian political scene. Mohammed Dahlan is the real door-opener for Hamas in Cairo. At first, that seems absurd. Dahlan is a Fatah man, who ruled with an iron hand in Gaza in the 1990s. Hamas accused him of torturing their fighters.

After Dahlan’s people were defeated by Hamas in the “Battle of Gaza” in 2007, he fled to West Jordan [the West Bank], where he also rapidly found himself in disfavor, and was accused of having poisoned Yasser Arafat. He finally found refuge in Dubai. He lives there now as a rich man with many enterprises, not the least of which is the weapons trade. He is acquainted with al-Sisi and the heads of the Egyptian secret service. As youths, he and Prime Minister Sinwar played together in the refugee camp Khan Yunis. Hamas intends to profit from Dahlan’s contacts. That’s only right and proper, an official tells us. Dahlan, “the Torturer” has an enormous blood debt to settle. On Thursday, Hamas allowed the most incredible demonstration since 2007: In the middle of Gaza city, ca. 2,000 followers of Dahlan celebrated their idol, raised portraits high and showed posters saying “Thank you, Dahlan.” And aid packets from the Emirates for which Dahlan had paid two million dollars were passed out.

The affair is clear to the analyst Reham Owda, who lives in Gaza. The most diverse interests are converging here very nicely. Hamas wants to escape its isolation. Dahlan wants a comeback, wants to be “the savior of Gaza” and become president of Palestine. Egypt, which is fighting ISIS terrorism in the Sinai, is hoping to bind Hamas with a security agreement. For a long time, Egypt has accused Hamas of supporting ISIS. There is no more talk of that now. Cairo and Abu Dhabi have an interest in loosening the tight bonds between Qatar and Hamas. Israel is following the development with interest. There is no uniform vision. If Hamas can save itself, that would be bad for some, because they hate Hamas; for others it would be acceptable, because they see Hamas as a force for order, without which, Gaza would descend into chaos, and that would have unpleasant consequences for Israel. What is difficult to understand is why Jerusalem does so little to alleviate the misery in Gaza. Courageous humanitarian actions could be mounted. Cutting down the electricity to the miserable people as well, and exposing oneself to the reproach of the world is not comprehensible. Israel must of course maintain an equilibrium between help for Gaza and its own security demands.

Vouchsafing the harassed people a minimum of human dignity, even if temporary, neither endangers Israel’s security nor strengthens Hamas. It is embarrassing to hear Yiftach Ron Tal, head of the Israeli electricity company, squirm when he explains the situation. It seems the government of President Benjamin Netanyahu is more set on the cultivation of the inter-Palestinian dispute than on the well-being of the people in Gaza. And no one cares about world opinion. Not a good sign.

19 thoughts on “It Stinks to High Heaven in Gaza”