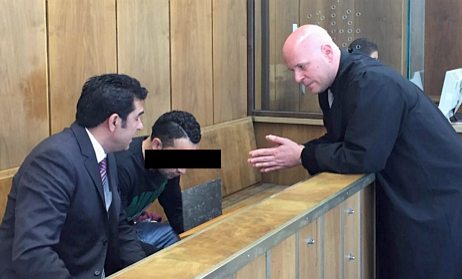 We reported last week on the Moroccan rapist Mr. Black Rectangle, or as the newspapers referred to him, “Naji N.”. He was recently put on trial for raping a pregnant woman multiple times in the German city of Hannover, and his principal defense seemed to be that he was too drunk and stoned at the time to know what he was doing.

Below is an update by Egri Nök on the case. It describes the conclusion of the trial, and the verdict. This report was originally published at Vlad Tepes in a slightly different form:

“He could not find stability in Germany”

We reported on this case last week; here are an update and the verdict.

1. The Victim Was Heavily Pregnant — Rapist Whines in Front of Court

From the German daily newspaper Bild:

Linden — He battered and raped a heavily pregnant woman (22), cynically caressed her pregnant belly, whispered “I love you” to his bleeding victim. Naji N. (27), the offender of the Ihme Center.

In the final sprint of the trial in front of the District Court, the asylum seeker from Morocco who has several fake identities pulls on the heartstrings!

He had been held captive by ISIS terrorists in Libya, says the North African, who allegedly suffers from post-traumatic stress syndrome.

In the final appeal, he steps up the game, alleges: “I was sexually abused, too”.

Before that, he stated that he had been a heavy drinker and stoner. For that reason, he allegedly did not remember the rape.

DNA traces convicted him as the perpetrator. The prosecutor demanded more than ten years in prison for the defendant for the particularly serious rape (range of sentences: 5-15 years).

The mild sentence: seven years in prison. The judge: “He had had a difficult development, was unable to find stability. But Naji N. accepts his responsibility.”

19 months of probation for battery were taken into account for the sentence. The Moroccan had beaten another woman black and blue…

Germany. Naji N. (27) from Morocco will only have to serve seven years prison time, after he had been raping and torturing a heavily pregnant 22-year-old from Hannover for hours. “He did not find stability in Germany”, the judge explains the mild sentence.

In the summer of 2015, the soon-to-be mother of twins was on her way home around 3.20, when the Moroccan, who was already notorious with the police, hit her on the head from behind.

Then he dragged the 22-year-old German into an elevator. There, he beat up the young woman, who was seven months pregnant, and repeatedly raped her. The beatings to her face were “potentially life-threatening”, the court established later.

Bild reported that the sex fiend cynically caressed the baby belly during the assault. The ordeal lasted more than two hours.

Finally, the victim was able to free herself with the last of her strength, and run onto the street. A passer-by discovered the woman covered in blood and clad only in a T-shirt.

It was more than a year until Naji N. was arrested in November 2016. Police had not released any information whatsoever on the case.

On Monday, the Hannover District Court sentenced the asylum seeker to seven years and three months’ prison time for rape and battery. The prosecution had demanded more than ten years.

The perpetrator had a “difficult development”

The 22-year-old suffered “significant physical and mental harm from the assault”, as the court announced, according to HAZ.

Judge Volker Löhr explained the short prison term by the Moroccan’s having had a “difficult development” and “not finding stability” in Germany. A previous conviction for torturing a woman was factored into this sentence.

19 thoughts on “Hannover: Moroccan Rapist Let Off Lightly — He Had PTSD”