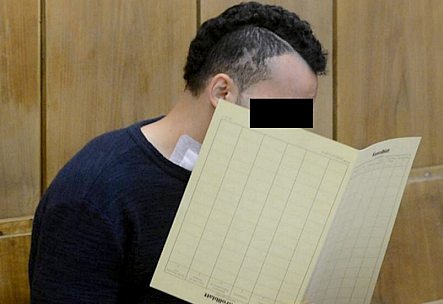 A Moroccan immigrant is on trial in the German city of Hannover for alleged multiple rapes of a woman who was seven months pregnant when the rapes occurred. I note with interest that the Moroccan’s lawyer seems to be presenting a defense based on the fact that his client was too drunk and stoned to know what he was doing — which is not the usual “it was because of cultural differences” tactic taken by Muslim immigrants who are prosecuted for violent sexual crimes.

So how much time do you think this guy will spend behind bars if he is convicted? Given that we’re dealing with Modern Multicultural Germany, my guess is six months to a year.

Hannover — In the courtroom, he holds a file folder before his face, does not want to be recognized. For a good reason: Naji N. (27) is said to have mistreated and raped a woman (22) for almost two hours. She was in her seventh month of pregnancy with twins!

Now the trial of the alleged rapist begin before the court of Hannover.

According to the charge, the asylum seeker from Morocco, already known to police (for battery, and having several alternate identities) had trapped the soon-to-be-mother at about 10am at the Ihme Center in the summer of 2015.

Kathrin P. (name changed) was on the way to her apartment in the Ihme Center, when she was hit on the head from behind. Naji N. Allegedly dragged her to the elevator, where he continued to beat her. Then he abused his victim in a corner next to the elevator.

In between he allegedly played psycho games with the pregnant woman, cynically caressing her baby-belly. Then he turned her over to rape her again.

With her last bit of strength, the woman defended herself against her tormentor, freed herself with kicks.

Bloodied, and dressed only in a T-Shirt, Kathrin P. ran into the arms of a newspaper delivery man at the crossroads Gartenallee and Blumenauer Street. He called the police.

An investigator (34) testifying: “She had massive injuries to her face, was crying. She could only stammer, had repeated fits of screaming.”

The only good news: The twins in the womb survived the crime, and were born healthy two months later.

Kahtrin P. testified as a joint plaintiff, and mother, in a session that was closed to the public.

Naji N. was not captured until November 2016 — in Lüttioch in Belgium. A match in the DNA data base tracked him down. He had been living in Germany since 2014, and had no connection with the victim before the deed.

The Moroccan’s defense attorney Philipp Kaiser declared that back then he was drinking one and a half bottles of vodka daily, and smoking weed. He therefore had no memories of the deed, but was “shocked” about what he had done to the woman.