Yes, she writes about fine and not-so-fine art but she covers culture, too. Particularly does she wax furiously eloquent about what the prelates in charge are doing to her beloved church. As only a Catholic might understand, her faith is never in question. It’s the people [currently] at the head of it, like Frankie. Think of her position in political terms: just because Obama ruled for eight years doesn’t mean we should all leave the country.

In this essay, she fisks the Cardinal of New York, a fat fool of a man. You don’t get to the top of the American Catholic bureaucracy by being a saint; you have to jostle and push as hard as any Beltway lobbyist just to maintain.

Over Fourth of July weekend, parish bulletins throughout New York Archdiocese carried “Only in America,” an essay by Cardinal Timothy Dolan. It was a hail-fellow celebration of tolerance and religious liberty. But the meringue had been whisked up by the dialogue fairy, a bewitching crony of resurgent Islam.

It began with the cardinal flashing his interfaith credentials. He had just received an award from the New York Board of Rabbis. This prompted one of those strenuously heartwarming reminiscences that are communion breakfast staples. It went like this: Cardinal Dolan once hosted a visiting Vatican dignitary who had once met a New York rabbi who once permitted neighboring Muslims to hold Friday prayers in his synagogue while their mosque was under repair. Why not? Quoth the rabbi: “They’re neighbors. They’d do the same for us.” The visitor from Rome, tears in his eyes, was deeply touched: “You realize, Timothy, this could only happen in America.”

Fairy dust. The anecdote short-circuits any unruly thought that, give a few years and increased Muslim numbers, this rabbi could be rewarded for his good will in precisely the same way as Fr. Jacques Hamel [see the wiki, here, in case you didn’t take names — D]. Religious freedom exists in Normandy, too, yes? No matter. His Excellency is attached like a limpet to the smiling aspect of things:

Do we realize the gift we have in our beloved country, religious liberty? We all get along! We respect one another! We work together!

OK, sure, there are fringe groups who are into exclusion, division and less-than-benign sentiments toward other faiths. But they are rare; they are a tiny minority.

OK, sure. The phrase is a giveaway. A high prelate straining to sound like a regular Joe betrays his condescension toward those he is ordained to guide. Islam, by its very nature, is the antithesis of tolerant inclusiveness. And who, precisely, are these unnamed fringe groups? Which particular fringe do they inhabit? Marginal Presbyterians, you think? Outliers from Temple Emmanuel? Is jihad a Bahá’i thing? 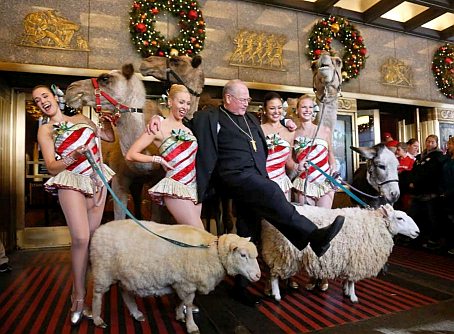 The amity and collaboration we relish here in New York cannot be taken for granted, As is evident in the news each day, other countries of the world see religious belief often perverted to espouse violence, hatred, extremism, and persecution. As Pope Francis has often observed, such hatred comes, not from God, but from Satan. To call this religion, the Holy Father claims, is a lie.

But it really is a religion and it has a name — Islam. And its ravages do not occur only in “other countries.” Islam’s lust for violence against infidels is a matter of theology, not geography. The Twin Towers crashed down in the Cardinal’s own bailiwick. Orlando, San Bernardino, and Boston are right here, not somewhere over there. In 2013, the Heritage Foundation counted at least 60 incidents of Islamic-inspired terrorism on American soil since 9/11. Of these, 49 were considered home-grown terrorist acts. Heritage’s numbers excluded foiled terrorist plots. Four years old, the numbers are higher than that now. They exclude the percentage of Muslims who approve of violence without participating in it. And they offer no way to know how many martyrs-in-waiting are harbored by the passive population.

This is not “a tiny minority.” A 2007 Pew survey estimated that Muslim-Americans who identify strongly with Islam are three times more inclined to justify suicide bombing than less devout co-religionists. Current polls claim that some 20% to 40% of Muslims worldwide assent to violence in advancing Islamic ends. That translates to a few hundred million. Some of them are already here; more will come.

The vapidity of the Cardinal’s message assumes a congregation oblivious to the evidence of their own eyes, blind to what it portends for the world their children must make their way in. Implicit in his letter is a pretense that religious identity is of no consequence. Mannerly interfaith soirées in agreeable surroundings are make-believe solvents for civilizational hostility and incompatible value systems.

Dolan draws a parallel between himself and the 19th-century Archbishop John Hughes who “had to depend on his parishioners to defend the Cathedral [Old St. Patrick’s on Mulberry Street] from nativist mobs.” Our cardinal sees himself in a similar role. But the great Dagger John was defending his own. Dolan is defending the mosque, not the cathedral.

A deceptive analogy, it erases distinction in numbers and cultural absolutes between New York’s Irish and Italian immigrants of the 1800s—legal entrants pledged not to become wards of the state— and today’s mass influx of undocumented migrants entering a welfare state to which they have never contributed. (And which Muslims are licensed to use as an oblique form of jizya. By whatever means, make the infidel pay.)

Reference to “nativist mobs” is a swipe at all who believe that there are prudential reasons for objecting to mass immigration itself; and that particular care must be taken with Muslims. In Dolan’s view, today’s circumspect are no different from the Know Nothings of the mid-1800s.

The truism that every Muslim is not a terrorist obscures the fact that Islam is the seed bearer of lethal violence against non-Muslims. Once Islam achieves sufficient muscle it aggressively disdains the very religious freedom the Cardinal celebrates. Europe testifies to that. Islam brings with it a parallel legal system that encroaches, by degrees, on the established law of the land. Real life consequences flow from multicultural pipe dreams.

Delusional is the kindest term on offer for the Cardinal’s complacency. The other that comes to mind is cynical:

How moving to see only two days after the attack on the Republican ball team at practice, and the critical wounding of Congressman Stephen Scalise, members of both parties kneeling in prayer before the game began. How American!

That the shooting of Stephen Scalise was an assassination attempt goes unmentioned. The cardinal himself finds nothing to pray for in this attempted execution. He ignores the echo of Third World anarchy implicit in the assault on members of Congress. Only the staged piety of publicity photos earns the cardinal’s attention. He uses it to pacify any sense of foreboding that is a rational response to the bloody incident.

He closes as he began, on a note of self-flattery:

Last October, at the Al Smith Dinner, as I waited at the end of the line, I took a dare…. The evening’s climate was already chilly, as I could not but notice that both candidates had avoided each other in the pre-dinner receiving line. As the three of us waited while the rest of a dais was introduced, I took the two candidates in hand, moved to a corner, and invited them to pray with me. Both Secretary Clinton and Mr. Trump took my invitation seriously, as they both bowed their heads, closed their eyes, and said “Amen” as I concluded. Then they both looked up, smiled, shook each other’s hand, and paid one another a compliment!

There is something close to grandeur in such monumental fatuity.

What accounts for it? The second largest episcopal see in the United States was not placed under the administration of a stupid man. But the higher clergy have become a caste unto themselves. All speak carefully to one another—the Cabots to the Lodges—while many grow lazy in speaking to laity. Is Dolan’s patronizing, disingenuous essay simply evidence of clericalism? Or is something more at work?

John Tracy Ellis, writing some sixty years ago, lamented “the temper of practicality” that afflicts our episcopate. The practical demands of administration become ends in themselves. Two days before Dolan’s letter appeared, the archdiocese announced the closing of eighteen parishes. Several of these were composites of previously independent parishes joined as a cost-saving measure. Such mergers and closings, coming at a ruinous pace, represent a dried source of income to the archdiocese. And the cardinal’s eye is on solvency.

Does the archdiocese, aligned with the politics and initiatives of the USCCB [U.S. Council of Catholic Bishops — D], see itself better served by continued government funding for refugee relief than by attention to the Christian faithful?

In an email response to my remarking on Dolan’s picture (and the other images, which I didn’t include), Maureen says:

From Bethlehem to Mecca in three easy lessons—Dolan will teach us how. Be glad, Dymphna, he’s not your shepherd.

The bishop in wolf’s clothing from a 13th C. British Book of Hours, a manuscript in the Walkers Art Museum (which has a splendid collection of such things—though totally ignored on the contemporary scene.) I believe the 2nd image —the ass with horn—is from the same, but am not certain.

The world has always been grotesque. Churchmen, too. We just like to forget that.

It’s difficult to decide: who’s worse? Is it the New York City mayor, a Communist, or the New York “shepherd”, a hedonist?