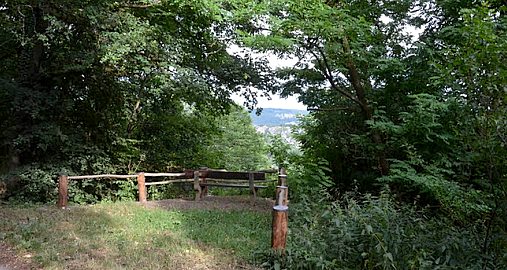 Volunteers recently repaired a bench at a scenic spot near the town of Windeck in North Rhine-Westphalia. Because the group that did the repairs was right-wing, Gutmenschen in the area have come down with an acute case of the Screaming Nazi Heeber-Jeebers and raised the alarm, demanding that the inscription on the back of the bench be removed immediately.

I discussed this incident with Egri Nök, who translated the article below. It seems to be one of those things that only other Germans can understand. The group that repaired the bench is not specifically neo-Nazi. It is thought — thought, mind you — to be associated with the Identitäre movement, and that’s where the Nazi smear comes from. Identitäre is widely assumed to be neo-Nazi, although there is no indication that it is any different from its sister organizations in France, Italy, Austria, and elsewhere. The entire kerfuffle seems to be a whole lot of hot air and wind about absolutely nothing.

After Egri finished explaining the controversy to the best of her ability, I said: “Germany is just stone nuts. No other explanation is possible. The whole country is in a state of terminal loopiness.” And the data bear me out.

The translated article from the Kölner Stadt-Anzeiger:

Windeck — A new fence, a renovated bench, and a fatal inscription. Emotions are running high in Altwindeck.

The core of the heated discussions is a scenic spot below the castle ruin at Burg-Windeck Street towards Schladern.

A group renovated it that presents itself as politically right-wing, and apparently stems from the Identitarian Movement and right-wing circles of the Obere Sieg. These “Friends of Rhein-Sieg” left their name inscribed on the bench, so that politically sensitized citizens now fear a new meeting point for the right-wing scene.

When a group of young people a few weeks ago asked neighbours for water and electricity for renovating the area, residents assumed they were doing hours of community service.

Johannes Salz from the Heimatverein [club for the maintenance of regional traditions and characteristics] said he initially didn’t know who the people were who offered to repair the Heimatverein’s bench and fix up the area. But then after the second meeting, he “got a stomach ache”. But by then almost everything was already finished.

When they saw the new inscription on the bench, the residents were not the only ones who were shocked. The Heimatverein’s warning lights went on, too. On the front, there was the sign for the village club, and on the back, the inscription for the New Right.

“That won’t do”, says Gisela Lechinger, a member of Johannes Salz’ board. But there had not been unity on the board.

Apparently, this has changed in the meantime. The club has contacted the Cologne municipality’s Centre for the Documentation of National Socialism, Salz and Lechinger report.

Their mobile consulting group will quickly hold a consultation in Windeck. Salz is positive that the inscription can be removed as soon as next week. In addition, a contract with the forestry commission office will be made that regulates the responsibilities for the scenic spot in the future.

But that can be fixed retroactively without cost for the club. Deckert makes no compromise regarding the usage: “There won’t be any Nazi slogans,” he promises. The forestry will “closely monitor” the situation in Altwindeck together with the other authorities, and intervene when necessary. The inscription, too, needs to go immediately. The chief of the public order office of Windeck, Ottmar Hassel, to which mayor Hans-Christian directed our request, speaks out in a similar manner.

Besides the scenic spot, another property in Altwindeck is causing concern. Right below the castle, the café “Golden Spinning Wheel” is vacant, after the leaseholders had to shut down. The owner wants to sell it, people in the village say. Right-wing sympathizers were interested in buying the house in the top-quality location. According to information available to the editors, there are political efforts to prevent that.

16 thoughts on “Beware of the Nazi Bench!”