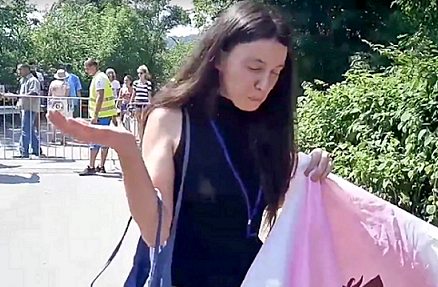 The following humorous piece describes the pathetic attempts by leftists to disrupt the speech. First, a preface by the translator, CrossWare:

A few days ago Viktor Orbán gave a lecture at the Open University summer camp in Tusványosfürdo, Transylvania,. His talk, like many others, speaks not only to the Hungarians but to the invaded and suppressed Europeans, and even overseas to the patriotic citizens of the USA and Australia.

The following article and short video exposes the opposition provocateur (it was only one!) and the colluding liberal MSM funded partly or fully by your favorite globalist: George Soros.

In the video you’ll see people shouting (including old ladies with hats on their heads and wearing their Sunday best — obviously all part of the tyrannical fascist conspiracy against democracy):

The brief essay is dripping with irony, and I hope the translation will be as funny as I think the original is. The article was published at the PestiSracok.hu web portal (“Boys of Pest”, as in Budapest, essentially it’s the Hungarian Breitbart).

Immediately clutch your chest! Hungarian democracy is in danger! The local provocateur training is in crisis! Yesterday the opposition could only send a single girl to Tusványfürdo, one who was obviously facing various mental challenges. She wanted to protect the trees here…

It was a great day on Saturday for Hungarian liberals! The “star-day” of Tusványfürdo arrived, the time for Viktor Orbán’s speech. But the Euro-conforming Hungarian democrats did not for the content provided by the Prime Minister of the country. They were waiting for whistles.

Orbán’s speech did not interest opposition leaders either. They wrote their reactions ahead of time. “Orbán taking Hungary to Asia, Putin’s and Trump’s henchman, Chinese, Turkish and Israeli cat’s-paw” — he should slow down; the list of his friends getting longer and longer. If he does not suddenly resign, they [the opposition] can continue to sunbathe quietly. If the whistling provocation works, then they will react.

The action was advertised a couple of days ago by “unknown activists” on the web. The goal: whistling against Viktor Orbán. Why? Because everything! And why not? In the “crime list” of the head of government everybody could find something for their taste: by whistling against Orbán they could protect the European values, or Gábor Vona’s [right wing party] gender identity too. Who would not jump at such an opportunity?!

Mostly on Facebook, they explained what to do. I must quote this word by word:

Well, it was possible to avoid it because there was no big “opposition crowd”… At Viktor Orbán’s speech only a single activist arrived with a whistle. Thousands of people and one whistling chick. It’s a miracle the Orbanian tyranny did not collapse immediately.

But an even greater miracle was the journalistic performance shown by yoke-mates in the liberal-left media. The enthusiastic Orbán-critic had only to whistle once and they hears it and found her in the crowd. Or at least that is what I think, because it could not have been that they organized all their reports with this hapless girl? The free and objective independent media would never do such thing, right?

In any case, we mere mortals could be only grateful for them, because from many angles we could follow the way in which the “political elite terrorises an innocent citizen” and the humiliated lady could not say anything for minutes [from shock]”.

In this case the “political elite” was a couple of decent, grizzled people from the audience. The “terror” was that they told the “lady” to stop whistling, because they had not come to Tusványosfürdo for a “concert”, but for Viktor Orbán to speak.

Was the “political elite” angry? Yeah, it was. Did they call out the girl? Of course! There was someone who wanted to take the whistle? Yes. When she continued to whistle despite the requests, did they push her aside? Yes. Push her around? Yes. Was there an idiot, who pulled her hair? Yes. Did she fall? Yes.

Is this nice and good? No, not at all. But this would have been pretty much the case if she had started screaming into her cell phone during a performance, or if when she had been in the path of peaceful consumers at a retail outlet on Black Friday. Not to mention at a rock concert or the Pride.

Finally the “lady” was chaperoned out of the crowd, no exaggeration, she was rescued. Yes, by her arm, in her best interests. All of this in the liberals’ language sounds like this: “While Orbán spoke, they brutally beat a woman in Tusványosfürdo — they tossed her out by her hair, because she had an opinion.”

What was her opinion? Once she was rescued from Orbanian suppression, she was ready to give an interview.

Well, yeah… from this point on the whole thing become pretty uncomfortable [for the liberals]. From the young “lady” we immediately found out, that she, in a nutshell, was in an indisposed state [I think the scientific English term is: “drunk as a skunk” — translator]. The enthusiastic liberal reporter asked her: is this from the beating of course, right? She answered: nobody beat her, she had just not slept the night before.

That caused a palpable disturbance among the representatives of the opposition media. Many of them tried to squeeze out at least one sentence about her horrible persecution. By God, they could not succeed. By her own admission, even the fact that she was led out of the event had not really caused mental trauma. She said: “Stuff happens”.

Then they tried to “investigate” why she was protesting. It would be hard to ask a more directed question, but they tried: “Is the trouble, as you wrote on Facebook, that Orbán in Tusványosfürdo does not speak a word about national strategy and issues concerning Hungarians beyond the state borders, but talks only about his fight against the West”?

The “lady” first gazed at the world with glassy eyes, then — twice pulling her hair back and forth for every single word — explained her problems. Based on that the trouble with Orbán is that he ruins everything. That is mostly about trees and baths and trees. Of course Paks is a problem too. [In Paks Hungary has a Russian-built nuclear power plant, which will be expanded soon]. But mostly she wanted to talk about the head of government about the closure of stores on Sunday… That was why she whistled.

After this, the “independent” media’s interest in the “lady” significantly dried up. The fact-finding reports are cancelled, we were unable to hear more tear-jerking moments about her life, which is ruined day by day by the Fidesz state-mafia. The opposition leaders did not start to beat the drums, in case the whiner-chick wants to deal with LMP [Liberal-Green Party] topics, then Bernadett Szél [leader of the Liberal-Green Party].

The only thing left for the independent media is the turbo-charging the “news”: spreading the latest horror of the Orbanian tyranny! The professional reporters can go to Brussels so they will have material against Hungary.

The CEU [Central European University, run by George Soros] can start thinking about taking up a new specialization… Because it is intolerable that not a single protester, paint-tosser or whistler can really get himself/herself decently beaten up!