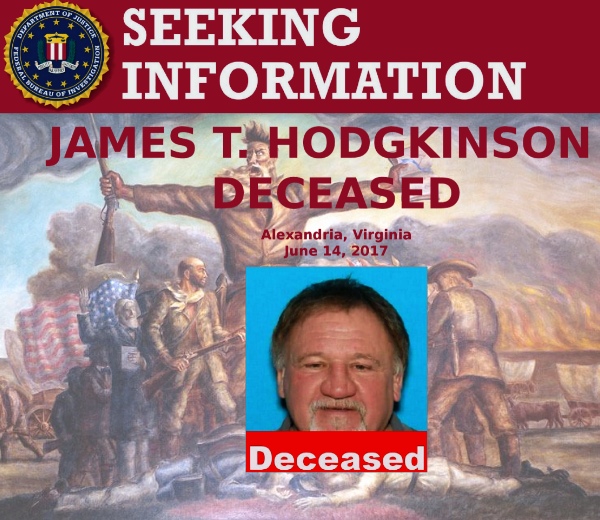 Early Wednesday morning a man with a high-powered rifle attacked Republican members of Congress at a baseball diamond in Alexandria, Virginia. The shooter, a man from Indiana named James T. Hodgkinson, was eventually shot dead by police officers, but not until he had wounded Majority Whip Steve Scalise (R-LA) and three other people, including two of the officers who took him out.

Prior to his rampage in Alexandria, Mr. Hodgkinson had been a devoted supporter of Senator Bernie Sanders (IN-VT), a self-described democratic socialist who ran in last year’s presidential campaign. Mr. Hodgkinson, like his admired candidate, was a staunch progressive. He was a bitter opponent of Donald Trump, and posted messages on Facebook to the effect that the president needed to be “destroyed”.

At some point James Hodgkinson decided to cross the line between peaceful protest and violent insurrection. By dying in furtherance of his political goals, Mr. Hodgkinson set himself up to be the John Brown of what many people — on both Left and Right — see as the coming civil war in America.

John Brown was a New Englander who became an ardent advocate of the Abolitionist cause. He made a name for himself as one of the leaders of the anti-slavery activists who took up arms to fight pro-slavery forces in “Bleeding Kansas” in the 1850s. In October of 1859 he came with a small band of armed comrades to Harpers Ferry — then in Virginia, now in West Virginia — and led a raid on the federal armory. The plan was to occupy the armory, liberate the stored weapons, and distribute them to free blacks, who would then lead a slave rebellion.

Brown’s ambitious plan failed. After occupying the armory and killing five people, one of them a black slave, he and the surviving members of his band were captured (as it happens, by a contingent of U.S. Marines led by Col. Robert E. Lee). In late October he was tried in Charles Town on charges of murder, inciting a slave rebellion, and treason. Interestingly enough, the final charge was for treason against Virginia, and not against the United States of America — a reminder that in 1859 Virginia was still a sovereign Commonwealth, which it remained until April 1865.

Along with his fellow conspirators, John Brown was hanged in early December of 1859. He was already immensely popular among supporters of Abolition in the North, and his death turned him into a martyr. In its original form, the popular Civil War song “The Battle Hymn of the Republic” was called “John Brown’s Body”, and included the well-known lines: “John Brown’s body lies a-moldering in his grave / But his soul goes marching on.”

More than anything else, John Brown and his raid represented the shift from non-violent Abolitionist activity to violent armed resistance. He derided his fellow Abolitionists as “pacifists”, and preached that armed insurrection was only path that would achieve the elimination of slavery in the United States.

His actions were part of the final, fatal run-up to the Civil War. By fomenting deadly violence for the cause, and then dying for it, he helped create and reinforce the armed divide between the North and the South that could only be resolved by four years of unprecedented bloodshed and the loss of more than 600,000 lives — two percent of the population of the United States in 1860.

As L.P. Hartley said, “The past is a foreign country: they do things differently there.”

The events of 1859 occurred long ago in a galaxy far, far away. Yet they are still resonant and relevant in the year 2017.

The Progressives of the 21st century — whose movement comprises a loosely-defined group of left-leaning supporters of socialist policies and income redistribution — consider themselves the worthy heirs of the Abolitionists. They see their cause, with all its intricate sub-causes, as the equivalent of a mid-19th century movement that strove to abolish slavery. For them, any resistance to open borders and unlimited Third-World immigration is the moral equivalent of slaveholding.

When any cause is that morally righteous, only a tiny step is required for it to move beyond a non-violent stance to an ideology that sanctions violence for the sake of the cause.

As of this writing, only the Antifas and their ilk champion violence in the name of the Progressive cause. Armed insurrection has not gone mainstream — YET.

Were Wednesday’s semi-automatic rounds in Alexandria the first volley of the coming civil war?

We’re too close to these events to be able to tell. Still, it’s clear that there’s only the thinnest of membranes separating the current we-deplore-all-forms-of-violence ideology from the moment when blood must be shed for the sake of a righteous cause.

Consider this clip of the venerable Chris Matthews describing his high regard for the principles espoused by the late James T. Hodgkinson. Mr. Hodgkinson’s cause was so right — if only, if only he hadn’t decided to kill people to further it!

But what happens when we reach the point when it is all right to kill people for the cause?

To stop Donald Trump. To ensure equity and fairness for people of color, and women, and LGBTQ people, and the handicapped, and Muslims, etc. etc. etc.

When the cause is that righteous, and the enemy is that unrighteous, why, then killing him is a duty. And killing his wife, his kids, other members of his political party, and on and on and on…

It’s not a mainstream meme yet. It’s still just the journeywork of the Antifas. But we’re inching closer and closer to the moment when it hits the mainstream in full force.

I’ll go out on a limb here — I do that a lot; that’s why they call me the Brachiator — and predict that the first signs of the mainstreaming of violence will pop up in places like Mother Jones and the fever-swamp wing of HuffPo and similar venues, and then spread to more respectable organs. Eventually hallowed outlets such as The New York Times will write approvingly about the regrettable necessity for the use of force against retrograde anti-American etc. blah yak.

And then the new, improved Civil War will be upon us.

There are complications, of course. A complete analogy with 1861 is not sustainable.

And then the Progressives will be left with… What? The Antifas and the Joint Chiefs of Staff, for sure. But what other assets?

Who among you will be willing to shed your life’s blood for Somalis and transgender bathrooms?

In any case, we’re definitely careening at high speed in the direction of that conflict.

Is James T. Hodgkinson is the John Brown of 2017? It’s still too early to say.

John Brown’s body lies a-moldering in his grave
But his soul goes marching on.

A note on the graphic:

The image at the top of this post is a composite of an FBI flyer and a famous painting by John Steuart Curry, which features John Brown as its central figure holding a rifle in one hand and a Bible in the other. The piece is known as “Tragic Prelude”, and is part of a multi-wall mural in the Kansas state house. It was painted on commission in 1937.