The following essay by Nick McAvelly was originally posted at Patriot’s Corner in a slightly different form. 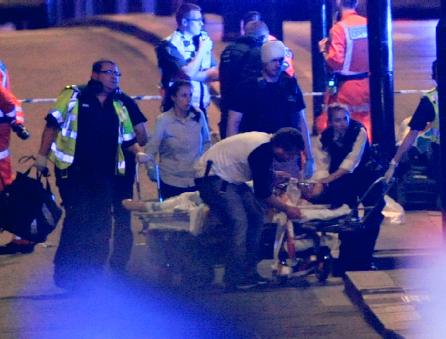 The Truth About Terrorism

In the years since 9/11, there have been multiple terrorist attacks. Not only has the terrorist problem not been solved, it has become difficult to even talk about it properly. This has played a major part in making the world a more sinister and dangerous place. The increased level of terrorist attacks around the world since 9/11, particularly in our own countries, have shown anyone who has eyes to see that the terrorists are in fact our secondary enemy. The primary foe — the real enemy — lies within.

The only legitimate reason for the existence of the state is to safeguard the negative freedom of citizens. Our governments have failed to do this, so we must take whatever steps we can to address the situation ourselves. The first thing each of us must do is clear our own minds of the memes that are currently being used to deceive us, so we can begin to understand the truth about the reality we live in. That alone is a victory. However, we must look beyond our own minds and consider the wider world. Each of us can start to counteract the anti-intellectual poison of so-called “political correctness” by openly refuting the false claims of the enemy, and doing what we can to establish a more rational, safer world.

Clearly, not all Muslims are terrorists. Where the subject term is Muslims, and the predicate term is men who have committed acts of violence and terrorism, the A proposition (All S are P) is false. 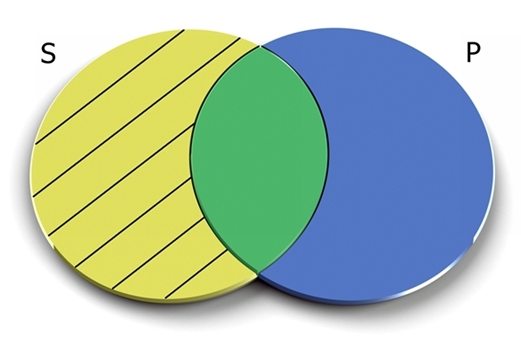 The A proposition — FALSE 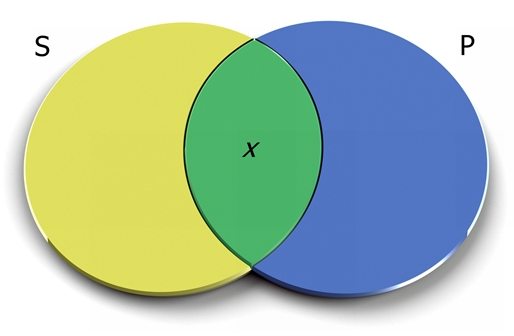 The I proposition — TRUE

On 22nd May 2013, two murderous creatures attacked Lee Rigby, a 25-year-old drummer serving with the Second Fusiliers in the British Army. Rigby had served in Cyprus and Afghanistan, where he was part of the Fire Support Group at Patrol Base Woqab.[1] The pair took Rigby’s life in brutal fashion, right in the middle of London’s streets.[2]

One of the killers, who had converted to Islam and taken the name Mujahid Abu Hamza,[3] was caught red-handed by a passer-by who filmed him on their mobile phone at the scene of the crime. Holding a dagger and a meat cleaver, Abu Hamza stated that he was following commands found in the Koran, specifically citing surah-at-taubah, the ninth chapter of Islam’s foundational text.[4] 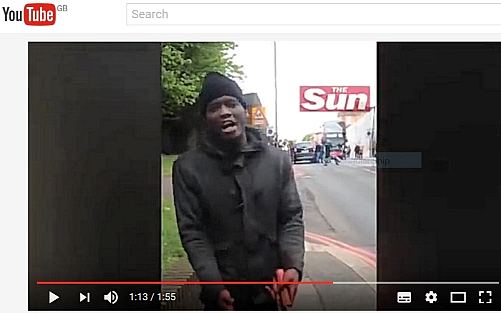 ‘But we are forced by the Koran, in sura at-taubah, through many, many ayah throughout the Koran …’ 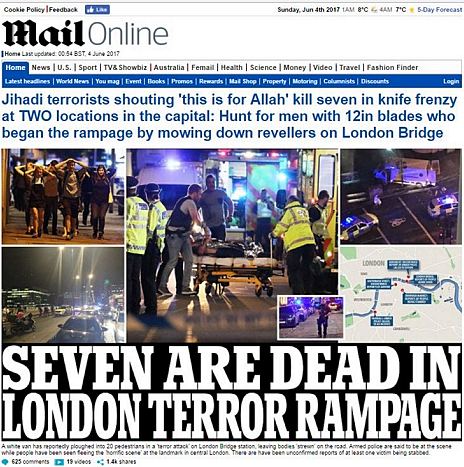 The “jihadi terrorists” who have just carried out the latest terrorist attack in London were reportedly screaming out their motivation to the world as they wielded their blades: they committed this act of terrorism in the name of the false deity of Islam.[5] There are two possibilities here. These murderers were just having a bit of a lark on a Saturday night after drinking a few beers, and they made all that “Allah” stuff up. Or they were devout Muslims who meant what they said. Which is it?

This understanding of human nature is as old as the hills. Here is a quote from the Dhammapada, a collection of the sayings of the Buddha, who was born approximately two and a half thousand years ago:

Mind is the forerunner of all actions.
All deeds are led by mind, created by mind.
If one speaks or acts with a corrupt mind,
Suffering follows, as wheels follow the hoof of an ox.[6]

The Dhammapada predates the invention of Islam by hundreds of years, therefore the understanding of human nature recorded in this religious literature cannot be attributed to “Islamophobia” (whatever that word even means).

The truth of the matter is that human beings are ambulatory hardware. We are directed to act as we do by our beliefs. As lines of code in our minds execute, our bones and blood respond in this three-dimensional reality. So the claim that discussing the motivation of “jihadi terrorists” is somehow about “race”, that is to say, human hardware, could not be more wrong. It’s all about software.

If you do not believe that the foundational claims of Islam are true, then the truth claims made by Islam are not part of your mind’s operating system, so any “jihadi terrorist” apps are incompatible with your consciousness. On the other hand, the fundamental truth claims of Islam are embedded within the operating system of anyone who self-identifies as a Muslim, and apps that drive people to murder in the name of “Allah” will only run on an Islamic operating system. It follows that being a Muslim is a necessary condition of becoming a “jihadi terrorist”.

The time has long passed for all this to be discussed openly and honestly in our countries. Whatever it is our politicians have been doing to protect us since September 2001, it has been a failure: people are dying every week on our streets! We need to realise that the political class are not only failing in their duty to protect us as citizens, they have been using the power of the state to prevent anyone else from addressing this problem. Finally, in June 2017, let us all say: Enough is enough!

The UN Special Rapporteur has stated:

The right to freedom of opinion and expression is guaranteed under article 19 of both the Universal Declaration of Human Rights and the International Covenant on Civil and Political Rights, which affirm that everyone has the right to hold opinions without interference and impart information and ideas of all kinds through any media and regardless of frontiers.

The Special Rapporteur has consistently underlined the importance of the right to freedom of opinion and expression, not only as a right that should be guaranteed to all, including individuals belonging to marginalized groups, but also as a means to claim and enjoy all other rights. Indeed, it is a fundamental right that safeguards the exercise of all other rights and is a critical foundation of democracy, which depends on the free flow of diverse sources of information and ideas. […]

As the Special Rapporteur has previously emphasized, for the right to freedom of thought, conscience and religion to be fully realized, robust examination and criticism of religious doctrines and practices — even in a harsh manner — must also be allowed.[7]

Let us admit to ourselves that the politicians who we have elected to protect us from harm are not only traitors and incompetents, they are our true enemy. This is our country — not theirs. We must openly reject their pointless, fallacious, mealy-mouthed soundbites, and we must hold them accountable for their failures. It has fallen to us to start talking about the real problem that has been imported into our country — Islamic software. If anyone experiences a transient emotion (a.k.a. feels “offended”) when they hear some things about Islam they never knew before, then that is utterly irrelevant. We have just witnessed two of the most horrific terrorist attacks imaginable. Let this be the time when we, the people, start to take our country back!

23 thoughts on “The Truth About Terrorism”