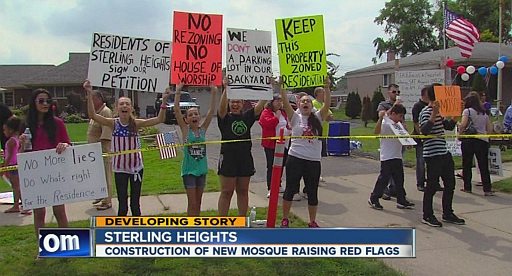 Last week Karen Lugo published a report in American Greatness about the controversy over proposed mosques in various locations across the USA, and the Justice Department’s habitual favoritism shown to Muslims in recent zoning decisions concerning mosques.

Below are excerpts from the article:

The Department of Justice is Privileging Mosques

The Department of Justice has become an advocate for the establishment of mosques in America. It is as if there were some congressional affirmative action mandate. The DOJ’s own statistics reveal a sharp escalation in intervention efforts on behalf of Islamic complainants, mostly involving mosque disputes with local zoning authorities. Alarmingly, these interventions reveal a pattern of generous settlements that benefit mosques while bypassing municipal laws and disregarding legitimate neighborhood concerns.

During the Obama Presidency, DOJ lawyers ran roughshod over local officials, as long as the complaining party was a mosque. Trump’s Justice Department must reverse these tendencies.

The atmosphere of DOJ intimidation cannot be overstated. Negotiated settlements between the DOJ, local zoning authorities, and mosque officials take place against a backdrop of DOJ threatening long, prohibitively costly litigation. The drive for ever more concessions, and more cash, confronts communities whose small governments cannot compete with DOJ’s $28 billion budget and legions of lawyers. Importantly, DOJ treats these settlements as if they were precedents even though, by sidestepping the courts, the settlements bypass judicial precedents that could protect legitimate community interests.

Just one example of neighborhood hardships that result from deferential permit agreements, the Dar al Farooq mosque in Bloomington, Minnesota is currently holding services for the entire month of Ramadan with overflow parking and lighted lots until 1:00 and 3:00 a.m. — in a residential neighborhood.

The Sterling Heights settlement is illustrative of abusive DOJ meddling.

The mosque had applied to build a 28,000 square foot facility on 4.35 acres of land. The building’s dome was to be 58 feet high and the minarets 66 feet high. The surrounding neighborhood has been settled by many Chaldean Christians who fled Iraq and Islamist oppression. An imposing Islamic structure was not met with enthusiasm to put it mildly. But federal law focuses on whether the decision-makers are biased. It demands that local government officials give all sides equal consideration. It does not require that neighborhood residents greet this kind of application with enthusiasm.

Read the rest at American Greatness.

11 thoughts on “The Department of Justice is Privileging Mosques”