As we reported last week, a culture-enricher murdered a five-year-old boy in an asylum center in the Bavarian town of Arnschwang.

As additional details emerged, the story became even more appalling. It turns out that the Afghan perpetrator (who was shot dead by police) comes from a family of criminals. He had been previously convicted of arson. While in prison on the arson charge, he converted to Christianity specifically to avoid deportation when he got out. After his release, he was sent to an asylum facility for non-Muslims due to his status as an alleged Christian, and that’s where he went on his rampage.

The following translations and summaries about Mostafa K., the Afghan murderer, are by Egri Nök. She includes this note about the asylum center where the perp was staying:

The accommodation is a typical run-down shabby “Gasthaus” in the countryside. Such establishments have generally gone bankrupt over the past decade. But some owners now have the chance of a lifetime to make a fortune by renting their shabby old hotels out to the government as refugee accommodations.

The first translated article is from the Münchner Abendzeitung:

The Arnschwang perpetrator: Munich wanted to deport him

The 41-year-old, who stabbed a 5-year-old child to death in an asylum seeker accommodation on Saturday, wore an ankle monitor and was on supervised release. In 2009 he had been sentenced to a long prison term. 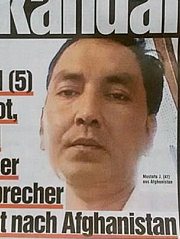 Arnschwang — he captures the boy (age 5), lethally wounds his neck with a knife: During a dramatic incident in a refugee accommodation in Arnschwang (district of Cham) in Upper Palatine, the 41-year-old also attacks the mother of the child. Police officers shoot him.

The background still remains unclear. For example, the nature of the relationship between the Afghan and the 47-year-old mother from Russia and her son. She is severely injured and currently not fit to be questioned.

Deed in Munich: Arson for “Honor of the Family”

Two days after the bloody deed, the Prosecution Regensburg and the Police Headquarters Regensburg announced that the attacker was a convicted felon. The man had been serving a prison term of almost six years until 2015, for particularly grave arson. In 2008, he had set the apartment in which he and his then-wife were living, to take revenge on his cousin and to re-establish the family honor, according to the prosecution.

As the government of Upper Palatine now announces, back then the city of Munich wanted to deport the man. But he successfully took legal measures against that. He declared at the time that as a converted Christian, he was in danger in Afghanistan.

Bavaria’s Interior Minister Joachim Herrmann (CSU) told the Bayerischer Rundfunk that similar cases ought to be reviewed, to find “whether, in a new approach, different decisions could be arrived at.” It was not reasonable to make the people in the country “live with the danger of such felons.”

Since his release from prison, the man was a tolerated asylum seeker (translator: asylum seekers who are allowed to stay for humanitarian reasons, even though their asylum application has been rejected) in Arnschwang, under the condition that he not leave the premises of the asylum seeker accommodation. He had to wear an electronic ankle monitor to control this. During that time, there was another conviction (monetary fine) for fare evasion. After the deed on Sunday evening, a policeman shot the 41-year-old, as the officers could not induce him to give up. The prosecution assumes it was an act of emergency assistance. The six-year-old brother of the murdered boy had to watch the deed. He and other witnesses suffered a severe shock.

Bloody deed in refugee accommodation: Stabber should have been deported in 2012

After the bloody deed in Arnschwang in Upper Palatinate, in which a child (5) died and his mother was severely injured, more details about the perpetrator have surface: the man was supposed to be deported for a felony years ago.

Arnschwang — The man who stabbed a five-year-old child to death in a refugee accommodation in Arnschwang in Upper Palatinate was a convicted felon and wore an ankle monitor, as the Prosecution Regensburg and the Police Headquarters Upper Palatinate announced in a joint press conference yesterday. According to our information obtained by our newspaper, Mostafa K. Was to be deported for particularly grave arson in 2012. The exact background of the bloody deed remains unclear.

In the evening, the man captured the five-year-old boy and fatally wounded him with knife wounds. During the ensuing police action, an officer fired a total of 8 shots at the 41-year-old, who was hit lethally. The prosecution regards the shots as an act of emergency assistance. The state office of criminal investigation is investigating into the firearm action. They are always consulted when officers on duty use a firearm.

Mother of the child severely injured

The 47-year-old mother of the child suffered severe, but not life-threatening injuries in the fight with the man. She is still under hospital treatment and currently not fit to be questioned.

The six-year-old brother of the murdered child had to watch the scene and suffered a severe shock. More people — among them one of the police officers — suffered from shock, too. The woman and her two children are asylum seekers from Russia. It is still unclear what relationship the woman had with the 41-year-old, and why there was a confrontation.

The 41-year-old Afghan Mostafa K. was registered as a “tolerated asylum seeker” [asylum seekers who are allowed to stay for humanitarian reasons, even though their asylum application has been rejected — translator]. He had been sentenced in 2009 by District Court Munich I for particularly grave arson to a prison term of five years, which he completely served through January 2015. After that, he resided in the asylum seeker accommodation in Arnschwang. During the arson he had set fire to his apartment in a Munich apartment complex with 64 tenants, planning to put the blame on his cousin with whom he had previously had a fight.

Mostafa K was on supervised release

Because of his conviction, Mostafa K. was under so-called supervision of conduct. The court ordered him — also to protect his family — to stay on the premises of the asylum seeker accommodation. To control this, he had to wear an electronic ankle monitor. His former wife, with whom Mostafa K. has an 8-year-old daughter, said that while in jail he had threatened to kill her if she should get a divorce.

As the Bayerischer Rundfunk reports, referring to Interior Minister Joachim Herrmann (CSU), in 2014, after examining his asylum application, against the rejection of which he was taking legal action, the administrative court together with the Federal Agency of Migration and Refugees issued a deportation ban. As he had converted to Christianity, the man’s life would have been in danger in his home country. Herrmann is skeptical about this decision. He said to BR: “In cases where countries indeed do impose a death penalty this is understandable. But in this concrete case it does not seem plausible to me.”

Below is Egri’s summary of an article from Der Spiegel:

According to Spiegel, The perpetrator of the Arnschwang murder (Mostafa J. or Mostafa K) converted to Christianity in 2012. He was baptized and confirmed on April 15, 2012, in prison. In his asylum application he argued that: “As a Christian, he had to fear for his life in Afghanistan. And also, the Taliban would persecute him.” He only applied for asylum when he was already a felon, in 2012, from prison (source: the same Spiegel article).

In 2011 the city of Munich issued a deportation order — the man would have been deported to Afghanistan after serving jail time. In January 2012, however, he applied for asylum. It was not granted, but the administrative court’s ruling permitted him to stay as a so-called “tolerated” asylum seeker. (same source)

Upon his release from prison, he was accommodated in Arnschwang on January 15, 2015. And because he said he had converted to Christianity, this refugee shelter that he was taken to was a specifically non-Muslim one. According to the authorities, only this institution was suitable for the convert, because it was “not mainly Muslim-imprinted” (same source).

A further note: In 2009 the attacker’s brother murdered his wife because she intended to leave him. The brother was convicted and is serving time in the Straubing correctional facility (also in Bavaria).

To wrap up the whole sordid story, here’s a late addition from the Frankfurter Allgemeine Zeitung:

The 41-year-old Afghan who stabbed a child to death in a refugee accommodation in the Bavarian town of Arnschwang was regarded as a danger to public safety. This emerges from a verdict of the Administrative Court (VG) Munich in 2014, as a spokesman confirms on Thursday.

That verdict rejected the man’s asylum application. Another verdict from the year 2012 said that the man possessed “high criminal energy, recklessness, and indifference towards potential victims”.