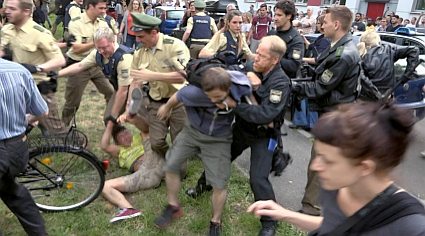 A young Afghan entered Germany illegally when he was 16, claiming he had no papers. Now he is 20, and his case has been adjudicated: he has no grounds for asylum, and must leave the country.

The poor, poor Afghan boy is now enrolled in a trade school. When the police came to school to fetch him, Gutmenschen among his classmates — reinforced by outside agitators — staged a violent sit-in and fought with police.

Below are videos and text about the tragic case of Asef N., the Afghan “refugee”. All materials were translated by Egri Nök, and Vlad Tepes did the subtitling.

I have translated three videos about the school riots. Video #1 is a news report from May 31 in “Brisant” a news magazine by ARD, i.e. German state TV. The narrator’s voice is dripping with irony and smugness, because it shows how the brutal police treat innocent kids who just want to protect their perfectly-integrated classmate from deportation. The last sentence is a threat to the police.

The innocent pupils were so violent that one policemen had his teeth knocked out, and police had to come in with pepper spray and dogs.

The deportation drama is still ongoing.

Video #1: A TV news report on the riot at the school:

Video #3: The puir wee Afghan bairn is interviewed, along with students and staff at the school. From ZDF (Zweites Deutsches Fernsehen, state TV), “Heute Journal”, June 2, 2017:

The following commentary on the case is from Roland Tichy’s website:

An illegal migrant makes a death threat at his deportation — so what?

The arrest of an asylum seeker in a school, attempted violent obstruction — certain media outlets are praising that — and the death threat which the person to be deported made is reduced to a footnote.

In Nürnberg, police tried to arrest a 20-year-old Afghan at his trade school to deport him to his home country. Hour-long riots ensued. Police had to face 300 protesters, who were more than just simply classmates of Asef N., but also “activists” from the radical left. The result: five injured policemen, zero injured protesters, fierce criticism of the “tough operation” of the law enforcement forces — and no deportation custody for the refused asylum seeker.

The case has four aspects: The arrest of an asylum seeker in a school, the attempted violent obstruction, the praise from certain media outlets for the pupils who deem themselves above the law, and — last but not least — reducing the death threat made by the person who would be deported becomes a footnote.

Police actions in a school: Nürnberg was not the first case where the law enforcement officers arrested illegal immigrants. Even when, in most cases, there were no violent riots as in Nürnberg, this approach seems out of place. Of course schools are not extra-territorial grounds, even if some functionaries of the teachers’ union like to give that impression. But the police could enforce statute and law in a less noisy way if they arrested people to be deported rather on their way to school, instead of entering school buildings. It serves no one’s interests when that disturbs and frightens younger, uninvolved pupils.

Resistance against deportations: We are living under the rule of law. And when in doubt, courts decide who can stay and who can’t. Whether someone, due to offenses against our laws, is arrested in his apartment, at his place of work, or in a school, his family, friends and colleagues are free to be indignant about that. But club law [law of the fist, of the jungle] against an alleged injustice contradicts the very basics of the rule of law.

Praise for “Brave Citizens”: It was not the policemen of Nürnberg who broke the law but the classmates of Asef N. and their supporters from the radical left. The more astonishing is the praise from the Süddeutsche Zeitung in the June 3 edition. The commentator praises the young “Brave Citizens” [“Mutbürger”, a pun on so-called “Wutbürger”, “angry citizens”, a derogatory term for people who criticize Merkel, which has come to be tantamount to “Nazis” — translator]. The comment literally says: “Obedience to the law cannot mean that the citizens have to accept every step of the executive immediately and meekly, especially, when it is as insensitive as in Nürnberg, and with such see-through political intent.” In other words: Whoever puts himself above the law where the abuse of asylum is concerned is a model citizen. One wonders how the SZ editors would like it if right- or left-extreme protesters stopped the delivery of their paper with violence, because they don’t agree with their political inclinations?

A murder threat? So what! According to the Marshal of Nürnberg, Norbert Guth, Asef N. yelled at his arrest: “I will be back next month. And then I will kill Germans.” Regardless of the rights and wrongs the police made in Nürnberg: An asylum seeker who threatens to return as a terrorist after his deportation has definitely forfeited his right to stay. Additionally, his actions show that a good command of German and regular school attendance alone do not prove successful integration. But in many media outlets, Asef N.’s outrageous threat shrinks to the size of a footnote — for reasons of political correctness.

SZ, which does not attempt to hide its sympathy for the young man, reports the incident in this manner: “If he really said that, then he is very sorry, he declared, he must have not been in control of himself. Still, it seems the sentence was said.” And then they quote a social pedagogue, who is full of understanding for the allegedly so exemplary integrated young Afghan: “The things that slip out in existentially exceptional situations, if you feel psychologically hurt,” she said. “Then you will say whatever will hurt your opponent the most.”

The Seed of Sixty-Eight [the year of the “student revolution” in Germany— translator]: The Nürnberg incident happens to coincide with the 50th “birthday” of the extra-parliamentary opposition (APO) on June 2, 1967, the day when the student Benno Ohnesorg, who was just peacefully protesting, was shot in cold blood by a policeman in Berlin. 50 years later the progressives praise how beneficial were the changes made by the APO to the society of the federal republic, made it more democratic and more humane.

Indeed: the protesters of Nürnberg, unknowingly, stand in the tradition of those who acted under the moniker: “legal, illegal, shmillegal!”. That spirit still seems very alive in some editorial offices.

Die Welt has more background on the innocent Afghan child:

Deportation in Nürnberg: “Afghan had been fiddling, deceiving and lying for years”

Who is the Afghan who is supposed to be deported in Nürnberg? He allegedly threatened an attack, his classmates defend him. Bavarian Interior Minister Herrmann raises serious allegations against the 20-year-old.

According to Bavaria’s Interior Minister Joachim Herrmann (CSU), if possible, refugees should not be collected directly from school for a deportation.

On Wednesday, police tried to collect the 20-year-old Afghan refugee Asef N. From a trade school in Nürnberg, to deport him the same evening. Riots ensued.

Herrmann puts part of the blame on the Afghan

“Of course we do not want something like that to be repeated,” says Herrmann. But he adds: “When the Federal Office for Migration and Refugees and the relevant District Court have clearly determined that he does not have a right of residence in Germany, then this has to be implemented accordingly.”

The CSU politician places part of the blame for the development on the person in question [the Afghan] in Nürnberg. “The young Afghan has been fiddling, deceiving and lying for years,” says Herrmann.

“He stated for the longest time that he did not have any papers, and then finally he produced an Afghan passport issued in 2007.”

He also paid US$7,000 to traffickers, and now he wanted a job in order to pay the money back. “We should not encourage this typical pattern of criminal trafficking organizations.”

22 thoughts on “Riots at School Prevent Deportation of Afghan “Boy””