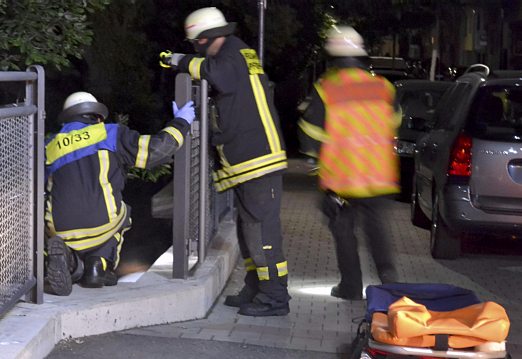 In the German city of Pforzheim, near Stuttgart, a young woman was sexually assaulted by a culture-enricher and then thrown from a height and severely injured.

Stuttgart — What a cowardly and brutal attack on a woman (29)!

A woman was found with the utmost in grave injuries around 12:50am on the night between Wednesday and Thursday in Pforzheim — below the quay on the River Enz.

At that point, the woman was still responsive. She told the police that at about 12:20 she had been sexually attacked by an unknown man.

[Photo caption (not shown): The woman was taken to hospital immediately. She is in critical condition.]

The woman resisted the attack so vigorously that she fell over the railing of the six-meter-high quay. The man fled. Police are investigating whether he intentionally hurled her over the railing.

A witness heard her cries for help and discovered the gravely injured woman, who, meanwhile, has been listed in critical condition.

Description of the perpetrator:

The woman described the attacker as between 30 and 40 years old, 180 cm [5′ 10″] tall, with a rather dark complexion and short black hair. He was of normal statue, wore a dark pair of trousers and a dark t-shirt, and spoke German with a foreign accent.
The prosecutors and criminal police are investigating an attempted homicide in connection with the sexual offense.