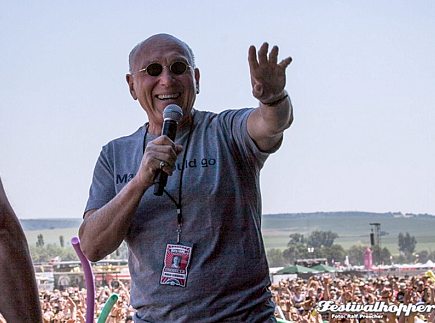 As reported here last weekend, the first day of the German music festival “Rock am Ring” had to be evacuated and cancelled, due to a potential terrorist threat.

Egri Nök has translated some additional videos and textual material about what caused the Rock am Ring cancellation. She includes this summary:

I did not translate the whole article from Die Welt, because it says what we already know. Only the part that is new:

On the morning of Friday June 2, police officers a traffic control noticed that three men wore wristbands giving them unlimited access to the festival site at the Nürburgring. It turned out that their names could not be found on the list of employees that the organizer had given to the authorities for security check.

Further investigations revealed that the men had been sent to the Ring by a subcontractor who had been appointed at the last minute as a stand-in, and “would not have had time to prepare an attack”.

The men are one German and two Syrians who live in Hesse. The German is a Salafist, known to the security authorities of Hesse. He was living in Frankfurt and had participated several times in the now-banned Quran-distribution event “Lies!”. His brother is currently in jail in Freiburg for drug dealing. According to police, there is no concrete suspicion at the moment, but the security authorities have “clear insights in the area of Islamist terrorism” regarding at least one of the men.

The first video is the press conference about the cancellation that caused so much controversy. It was convened by Marek Lieberberg, the organizer of the festival (thanks to Vlad Tepes for subtitling both videos):

The second video is a response recorded by a prominent Turkish-German Muslim:

Lieberberg is an important and respected person in the German music industry. He has been doing concerts for +20 years.

Right after the evacuation, Marek Lieberberg, the festival’s organizer, made this spontaneous statement to the press.

Lieberberg is Germany’s most important concert promoter and is immensely popular with music fans. He was born in a camp for displaced persons as the child of Holocaust survivors. The first concert he organized was The Who in 1970. 2017 marked Rock am Ring’s 30th anniversary.

In his spontaneous statement, Lieberberg alleged that whenever there is a terror threat, large sports events received priority treatment from security authorities. Events such as his would bear the consequences of failings that happen at the level of the security authorities, as in the case of Amri, the Berlin Christmas Market attacker, who walked freely despite being a known terror risk. “I want to see something finally happening in this country! Terror risks being arrested, for example. That those risks don’t walk free.”

Lieberberg said he was tired of hearing “This is not my Islam”, and instead, wanted to see Muslims demonstrate against terror: “I have yet to see Muslims take to the streets by the tens of thousands to ask: What the hell are you doing?”.

For this, the next day, the media widely accused him of “snapping” and catering to the AfD.

Many media outlets and the German Council of Muslims (Zentralrat der Muslime in Deutschland, ZMD), demanded an apology from him. Bento, a teen magazine published by Der Spiegel, claimed that Lieberberg was wrong, because, after Islamic terror attacks, Muslims “often take to the streets, unified and in dedicated protests, to warn of associating Muslims with attackers.”[1] oblivious to the fact that this is exactly the “This is not my Islam” reaction that Lieberberg was so tired of.

Instead of backpedaling, in an interview with the Süddeutsche Zeitung[2], Lieberberg on Saturday confirmed: “I expect unambiguous opposition to violence and terror from everyone. But in my perception, people of Muslim faith have so far unfortunately largely missed out on articulating this in demonstrations.”

He expounded on the difficulties of securing a large event: “The Manchester attack did not happen inside the hall, but in front of it. But it could have happened in the subway, too. So the question arises: how far-reaching can the shield be on events? We cannot completely shield ourselves off. In my opinion, the authorities are called upon — and I mean somewhere completely else.”

Süddeutsche Zeitung: “Arresting terror risks, like you demanded in your press conference?”

Lieberberg: “The authorities need to improve how they find and deal with suspects. We see in the Amri case the kind of gaps that exist.”

To the Süddeutsche‘s accusation that he had been “quick to assume an Islamistic [sic] background”, Lieberberg dryly replied:

“I did not assume that, the authorities did. I was informed that the arrested persons belonged to the Salafist scene.”