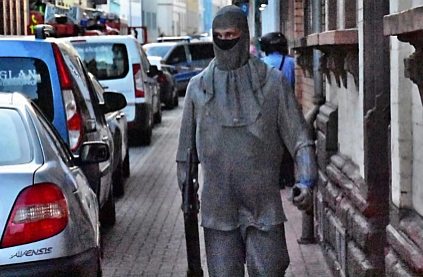 This is the latest trend in German apparel, at least among the police.

When I showed the above photo to the future Baron and told him it was a German police officer dressed to deal with a violent Muslim criminal, he asked me: “Is he wearing a burka to keep from offending Muslims in the neighborhood?”

I wish it were something so amusing. But no; I had to explain to him that the policeman was dressed in special chain-mail armor to confront a culture-enricher who had run amok with a meat cleaver. Such is Modern Multicultural Germany.

Note: The text of this article doesn’t give any hint of the ethnicity of the perpetrator. However, look at the photo from the time of his arrest: Even with all the pixelation, he’s distinctly “Southern”. I’m sure the bookies would be delighted to take any bets that he’s an ethnic German.

Because a man threatened to run amok with a butcher’s cleaver: Special Units go in chain armour

War of Nerves in Neunkirchen (Saarland)

The Special Unit officer is protected. He wears a complete body armour, because a man (25) threatened to run amok with a butcher’s cleaver.

[Photo caption (not shown): The officer in his protective suit.]

Around 6pm on Monday family members contacted the police: their relative (25) had a knife and a butcher’s cleaver and threatened to kill anyone who came close.

A police speaker: “In addition, there was an unidentified smoke development. As there were fears that the man might commit arson, firefighters were called, too.”

[Photo caption (not shown): Force open, if need be — with crowbar and chainsaw, a police officer goes to the apartment.]

First, the new special forces OpE (Operative Unit) sealed off the street, armed with machine guns, and the rescue services were equipped with bulletproof vests.

Then the SEK arrived: the elite police officers went into the building with ballistic protective suits and body armor to protect from stab wounds.

Family members kept talking to the 25-year old who had barricaded himself in the apartment, until after three hours, he finally gave up in the end and came outside.

The man was taken to hospital. In the apartment the weapons were found, but he had not committed arson. 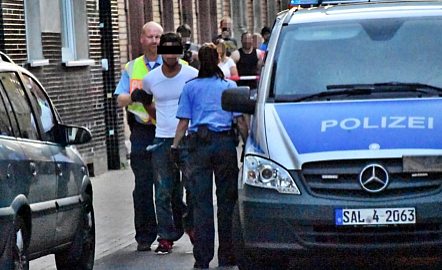