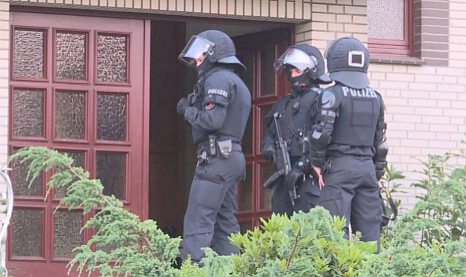 A Syrian “refugee” living with his family in Seevetal, a suburb of Hamburg, was determined to be a former mujahid and driver for Jabhat al-Nusra in Syria. On Monday armed officers from police special forces raided his house in an affluent suburb and took him into custody. Similar raids at other locations bagged more of his relatives and comrades-in-arms.

Egri Nök, who translated the article below about the arrest in Seevetal, includes this explanatory note:

The media writers stress “the North”, I think, sort of in amazement/disbelief, because in Northern Germany, there are more sheep than human inhabitants. You would not expect terrorists there.

Three things struck me about this:

The translated article from Bild:

Special Forces Operation in the North

Officers of the SEK [German special police forces] charged the house of a Syrian refugee family in Seevetal (Landkreis Harburg) Monday morning at 4:40.

Anti Terror Raid in the North!

[Photo caption: Blindfolded, the family father is driven away. (not shown)]

In the early morning hours, numerous unmarked cars and police cars drove into the quiet neighborhood of the 40,000-inhabitant community Seevetal, south of Hamburg. All through roads were blocked off, then heavily armed officers stormed the house.

Shortly thereafter, the family father was led away blindfolded, and interrogated in an unmarked car, before being driven away. Then, detection dogs searched the house. Family members were questioned.

According to “NonstopNews”, neighbours describe the man as friendly and unassuming. He has been living there with his family since September 2015. Lately, he has been working as a delivery driver, and got his driver’s license especially for that. 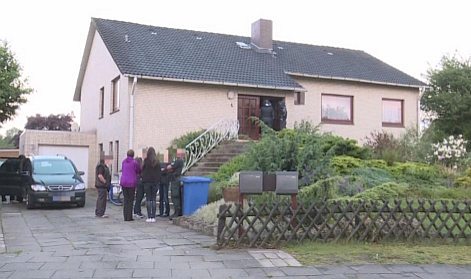 [Photo caption: officers standing in front of the house in Seevetal.]

At the same time, in Hamburg and Lübeck, three further suspects were arrested. Mustafa K. (41), Abdullah K. (39), Sultan K. (44) and Ahmed K. (51) are strongly suspected to have been members of the terrorist organization “Jabhat al-Nusra” (JaN) and to have violated the War Weapons Control Act. Three of those arrested are allegedly brothers. It was neither confirmed nor denied that the fourth was part of the family, too.

[Photo caption: several ambulances stand by in Seevetal. (not shown)]

The four men allegedly joined JaN in Syria in early November 2012. From then on, JaN was involved in armed conflict with government troops in the Northern Syrian town Ra’s al-’Ain. Mustafa K. made his house at the northeastern district available as base for JaN. Furthermore, he and his brothers Abdullah K. and Ahmed K. performed driving services for the organization.

All suspects will be presented to the investigating judge at the Federal Court of Justice on Tuesday.