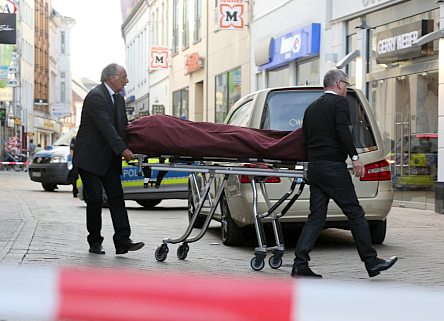 I shouldn’t be so flip about an incident as ghastly as this one — a man was stabbed to death on the streets of Oldenburg in Lower Saxony for the crime of eating ice cream during Ramadan — but sometimes a dose of gallows humor is the only way to keep the horror at bay.

According to a witness at the scene of yesterday’s murder of a refugee in Germany by two other refugees, (please see yesterday’s post here) the victim was eating an ice cream cone, which enraged the attackers because it is Ramadan.

A man in Germany, was murdered for violating a minor tenet of sharia law on the streets of Oldenburg, in broad daylight. While two men have been arrested, they will someday be released, if they are even convicted at all. But the notion that there could be an instant death penalty for violating a sharia norm, even though it’s dead centre of permissible by German law, is going to be understood by all.

That is why this was an act of war, and not a crime. It was an attack on the German system of laws, the culture, the basis on which decisions are made.

In fact, this gives Germans and the rest of us an opportunity to fight back using the one method that remains temporarily legal. Eat in public and make sure muslims see you, for all of Ramadan.

The murdered man may have been a co-religionist of the perpetrators, but some of the reports label him a Yezidi. In any case, the murderers were executing a religiously-sanctioned judgment under sharia law, which Muslims are required to enforce against Muslims and non-Muslims alike.

On the streets of Germany.

Now let’s think about what will happen to the two alleged perps who are now in police custody. Based on more than a decade’s experience of observing European “justice” closely, it’s reasonable to expect that they will spend very little time in prison. The one who did not actually strike the killing blow will probably walk free. The one who wielded the knife will be sentenced to a few years (fifteen is the absolute maximum, probably far less) in state custody, and will be released when he has served less than half of that. He may be deported when he comes out, but not if the appeals court determines that he would be in danger if returned to his homeland. That would violate European human rights law, in which case he will remain in Germany. Or anywhere in the Schengen Zone he decides he wants to reside.

What would have happened to someone who committed the same crime in an Islamic country ruled by a despot or a dictator? In Egypt under El-Sisi, for example: if he was not executed, the perp would draw a lengthy prison sentence. And that’s in an Egyptian prison, mind you. Under unspeakable conditions that are best left undescribed at a family-friendly site.

A similar outcome could be expected in Jordan, Morocco, and Tunisia.

In other words, only places like Iran and Pakistan are more amenable to sharia than are Germany and other Western European countries. Germany has now seen a sharia death-sentence executed openly on its streets, and its likely response is one that the average Muslim would see as laughably indulgent.

No wonder they see us as weak and cowardly and ripe for a takeover.

Muslims cannot possibly conquer us militarily, so terrorist attacks are the most they can achieve in terms of kinetic warfare. In the larger war, those are only pinpricks, but they do serve the useful purpose of keeping the infidel afraid. And they provide constant reminders of exactly who he is afraid of.

The “grooming and pimping” gangs are acting according to sharia law. What they do is not unlawful under Islam, because only non-Muslim children are their victims. And most of their abominations go unpunished, so they (and we) are living in a society that has largely allowed itself to be ruled by sharia.

But acts like that of the knife-wielding executioner are the most significant of all, because they constitute the direct enforcement of sharia law, publicly and openly, on the streets of Western Europe. If such perpetrators are let off with little or no punishment, then the authorities will have conceded the primacy of sharia within their jurisdiction.

Americans often say that Europeans got themselves into this mess because they aren’t allowed to own weapons of self-defense. Yet guns in the hands of ordinary citizens wouldn’t stop the process that created that corpse on the street in Oldenburg.

Yes, a citizen with a gun might be able to protect himself against a marauder or stop his wife or daughter from being gang-raped. But he can’t do anything about the larger process that is Islamizing his culture — the importation of “refugees”, the asylum centers, the lavish social benefits, the preferential treatment of Islam and Muslims, the abolition of his traditional way of life. The entire social, academic, and political structure is geared up for his destruction and is working against him. Only a complete fiscal collapse or a violent revolution (very unlikely) could change the course of that juggernaut.

The same is true of the USA, albeit in a delayed and slightly different form. You can own all the firearms you want, but you can’t stop the government from bringing in millions of “refugees” or implementing affirmative discrimination or allowing “trans” men in the shower room with your high-school age daughters. One man with a gun, or a hundred, or a thousand, can’t stop that process.

What we’re seeing in both Europe and the USA are various theaters in the information war. And that war has already been lost. Grin and bear it, boys: Islam is here to stay.

Vlad’s right: if you live in Western Europe, and want to stay alive, don’t eat ice cream in public during Ramadan.

First the Saturday people, then the sundae people…

66 thoughts on “I Scream for Ice Cream”