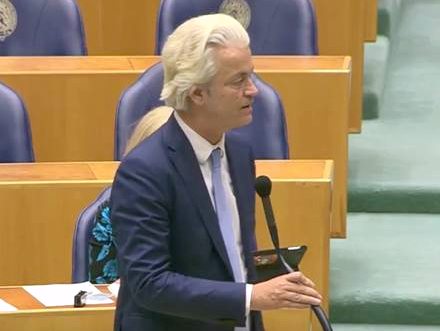 Below are excerpts from remarks made today by Geert Wilders, the leader of the Party for Freedom (PVV) in the Netherlands. Mr. Wilders was responding to Prime Minister Mark Rutte in the Dutch Parliament:

Video transcript (translation by the PVV):

It makes one despair to have to listen over and over again to these platitudes of the Prime Minister. He says Muslims are suffering twice.

Mr Prime Minister, how about speaking on behalf of the victims here in Europe, people whom by governors such as you, but not just you, have been inundating in the past few decades with masses of Muslims?

Our free West has been Islamified. We have made zero demands when it comes to assimilation. We are now suffering the consequences. Individuals who despise our Western values and rules. They commit attacks. Women, homosexuals are… It is more than just a few exceptions. I mentioned the numbers. 70%, 80% of Muslims say that their rules today, in 2017, are more important than the laws we have voted here in the House of Representatives.

It is not true that Muslims are victims, but it is us who are the victims of Islamization.

People whom you have allowed in. Why do you not say anything about that?

Do I understand correctly that Mr Wilders is saying that Islam, that the Muslims are responsible for the attacks?

Is that what he is saying?

Islam, yes. All Muslims, no. But Islam certainly, yes.

99 of the 100 attacks are committed by people invoking the Koran, shouting “Allahu Akbar”.

We would not have them here if we in Europe had not taken in masses of them in the past few decades. Certainly, not all Muslims are terrorists, but almost all terrorists are Muslims, barring some exceptions.

Of course, if non-Muslims are the perpetrators, that is equally terrible. I also said that in my speech in the first term. We of the PVV mourn those victims equally. But do not come here as Prime Minister to say that Muslims are victims twice. We are the victims. We are the victims of people like you who have flooded our country with Muslims over the last few decades, some of whom — some! — use violence against us. You cannot deny that, do you? You cannot deny that most attacks are committed by Muslims? I am not making that up, am I?

I cannot believe my own ears! Indeed, there is a problem with groups who settled in The Netherlands, whom we have insufficiently made to understand our rules and values, our way of life and our laws, which we expect them to accept.

Far too long we have been praising the multicultural society in which groups exist next to each other, instead of demanding that immigrants realize what our country stands for.

Sociology teachers are complaining that we should be more clear about what “citizenship” means. To me the answer to this question is that this is a free democratic society with equal rights for men and women, homosexuals and heterosexuals, white and coloured.

And it is also about freedom of expression and religious freedom. Of course, there is broad agreement here in this Chamber that huge mistakes have been made. But you cannot, after realizing this fact, which in itself involves a number of social issues which this debate is not about, pretend that this leads to terrorism.

People who go to the mosque on Friday, who are pious Muslims, who are allowed to profess that religion in this country on the basis of freedom of religion and who want to exercise that faith in a decent way, should feel co-responsible for the attacks committed here. That is what I hear Mr Wilders say. I’m shocked by this.

Well, you can certainly be shocked by that. But I just haven’t said that. What I did say was that Islam is the cause and I said in my speech that there are not just a few perpetrators.

Of all the people who left the Netherlands to fight in Syria 80% are Moroccan.

Do not say that I’m talking about all Muslims, because that is not the case, but Islam is a tumor in our society and we have to get rid of it. That is something you cannot deny by simply seeing Muslims as a sort of double victims. We are the victims of this Islamization; that is the truth.