Book Review of Ibn Warraq: The Islam in Islamic Terrorism 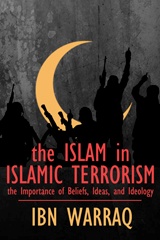 The world is witnessing a massive wave of Islamic terrorist attacks. Hardly a week goes by without such an attack taking place somewhere in the world. Sometimes, militant Muslims carry out several deadly atrocities in just one day.

Europe and the Western world are also increasingly being targeted by such deadly terror. Western politicians and media are quick to claim that the murderous attacks carried out by militant Muslims have nothing to do with Islam. The esteemed author Ibn Warraq disproves this false claim in his new book The Islam in Islamic Terrorism: The Importance of Beliefs, Ideas, and Ideology.

Many leading figures from the international Jihadist movements have been members of the Muslim Brotherhood. They range from Sayyid Qutb and Abdullah Azzam to Ayman al-Zawahiri, leader of the terrorist network al-Qaida after the death of Osama bin Laden, and Abu Bakr al-Baghdadi, the self-proclaimed caliph of the Islamic State (ISIS).

As the author states:

To understand the behavior of Islamic terrorists, to make sense of their motives, we must take their beliefs seriously. The acts of ISIS or the Taliban or any other jihādist group are not random acts of violence by a mob of psychopathic, sexually frustrated, impoverished vandals, but carefully and strategically planned operations that are part of a long campaign by educated, affluent Muslims who wish to bring about the establishment of an Islamic state based on the Shari’a — the Islamic Holy Law, derived from the Koran, that is the very word of God, and from the Sunna of the Prophet and the Traditions (ahādīth, pl. of hadīth), which are the sayings and doings of Muhammad and his companions. Nor has Islamic terrorism emerged, ex nihilo, in the ‘past 40 or so’ years. From its foundation in the seventh century, violent movements have arisen seeking to revive true Islam, which its members felt had been neglected in Muslim societies, who were not living up to the ideals of the earliest Muslims.[1]

Ibn Warraq reminds us that “Islam, however, is much more all-encompassing and more totalitarian than Marxism or Christianity. Both religious faith and political ideology, Islam oversees every aspect of a Muslim’s life — from what a non-Muslim might consider minor details (such as how to use a toothpick) to larger issues such as prayer, pilgrimage, and marriage. Islam also provides a powerful sense of personal and group identity.”[2]

According to most scholars, Muslims have a duty to command right and forbid wrong. By “right” they mean all that Allah and His Prophet have commanded, and by “wrong” all they have forbidden:

Since Forbidding Wrong is an Islamic practice that tells people what to believe, it reminds us of the profound difference between Islam and Western liberalism. As I have written, under Islam, life is a closed book. Everything has been decided for human beings: the dictates of Shari’a and the whims of Allah set strict limits on the possible agenda of our lives. In the West, we are free as individuals to choose our goals and determine our path, and to decide what meaning to give to our lives. As Roger Scruton has remarked, ‘the glory of the West is that life is an open book.’[3]

Claims that the term “Jihad” primarily means peaceful, inner struggle against oneself are not credible. There are hundreds of sources for militant Jihad in the major hadith collections, commentaries on the Koran, law books from all the schools of sharia law, and so on. There do not seem to have been any works devoted exclusively to spiritual Jihad. This is clearly a derivative form, since it is not mentioned in any of the canonical collections of hadith:

While the root of jihād means ‘to strive or exert oneself,’ in its primary sense it came to mean ‘warfare with spiritual significance,’ that is, fighting in a military sense, or armed combat, for the sake of God (fī sabīl allāh). The aim of jihād is the expansion of Islam, and it is an incumbent religious duty of all able-bodied Muslim males. The goal is to submit the world to Islam, and spread a gospel of unmitigated, uncompromising monotheism spelled out in the Koran. By its nature jihād is a permanent state, and can only fall into abeyance when all of mankind submits to Islam—when the last Dar al-Harb, a country that has not yet been subdued by Islam, becomes Dar al-Islam, a territory where the edicts of Islam are fully promulgated—where the Shari’a reigns supreme.[4]

Ibn Warraq proves that there has been a strong continuity of Islamic thought on Jihad violence for over a thousand years, going back to primary Islamic sources, the Koran, the hadith literature (the sayings and deeds of Muhammad and his Companions) and Muhammad’s personal example (sunna).

Jihad is often viewed as the sixth pillar of Islam. According to the Koran, Muslims alone possess the absolute truth, and they constitute the best of all nations. They should rule all other peoples because they are superior. The ultimate purpose of Jihad is to conquer and dominate non-Muslims. It has never been merely a defensive doctrine. Since the seventh century, aggressive and violent Jihad has been waged to extend the frontiers of Islam.

Muslims cannot accept any other religion or constitution. A Muslim has the right, indeed the duty, to fight anyone who stops him from spreading Islam and Islamic rule. This is defined as a defensive measure. It is a duty for all Muslims to spread the Message of Islam, and anyone who stands in the way must be fought in the military sense, if words do not suffice:

As Lav says, there are no specific grievances, it is not something we, in the West have done, it is simply the fact that we do not accept the Koran as a blueprint for a model society. Our simple existence is provocation enough. It is the duty of the Islamic terrorists to bring about a society ruled by God’s laws as promulgated in the Koran. The Islamic terrorists throughout Islamic history are galvanized by the same concerns: a desire for a return to the purity of their ancestors (salaf), a rejection of innovations (bida’), a rigorous adherence to the concept of tawhīd (Unicity of God), the duty to follow the principle of Commanding Right and Forbidding Wrong and the necessity of carrying out, for the sake of God, jihād, in its military sense. They all have recourse to the same sources, above all the Koran; they all quote the same verses from the same suras, page after page.[5]

Ibn Abd al-Wahhab, the eighteenth-century founder of Wahhabism or Salafism, was not motivated by anti-colonial ideas. He was not even aware of any European presence in the Islamic world. He was mainly concerned with purifying Islam of its impious accretions.

Many Western liberals seem to believe that Islamic terror attacks in the Western world are caused by something bad “we” did to “them,” some form of aggression that must be revenged. They do not understand that their very existence is offensive to Muslims. The mere existence anywhere on Earth of non-Muslim communities who rule themselves according to secular laws is an insult and a form of aggression against the God-given supremacy of Islam.

Syed Abul A’la Maududi was a very influential modern Islamic writer, especially in the Indian peninsula and Asia. As Maududi explains in his treatise Jihad in Islam:

But the truth is that Islam is not the name of a ‘Religion’, nor is ‘Muslim’ the title of a ‘Nation.’ In reality Islam is a revolutionary ideology and programme which seeks to alter the social order of the whole world and rebuild it in conformity with its own tenets and ideals. ‘Muslim’ is the title of that International Revolutionary Party organized by Islam to carry into effect its revolutionary programme. And ‘Jihād’ refers to that revolutionary struggle and utmost exertion which the Islamic Party brings into play to achieve this objective.[6]

Maududi wished to replace man-made laws everywhere with God-made laws, sharia. The message could not be clearer: Islam must conquer the Earth. Not just parts of the Earth, but all of it. The purpose of Jihad is totalitarian: It demands the engagement of all Muslims until our entire planet is ruled according to the precepts of Islam. All other ideologies, as systems where man-made laws rule, are enemies. Islam wishes to destroy all states and governments anywhere on the face of the Earth which are opposed to the ideology and program of Islam.

The various hadith collections devote much space to psychological warfare as an important component of Jihad, for spreading fear among non-Muslims. The Pakistani Brigadier General S.K. Malik elaborated on this in his work The Quranic Concept of War. Muslims should ideally win the war of wills even before the war of muscles begins. The ultimate purpose of terror attacks is to destroy the enemy’s faith, break his spirit and scare him into submission: “Terror struck into the hearts of the enemies is not only a means, it is the end itself,” Malik states, “It is the point where the means and the end meet and merge. Terror is not a means of imposing decision on the enemy; it is the decision we wish to impose on him.”[7]

There are theological differences between Sunnis and Shias on some issues. However, both main branches of Islam believe in the use of violent expansionist Jihad to achieve the global supremacy of Islam and institute the laws of Allah. As Ibn Warraq concludes:

Iran is representative of what Islamic fundamentalists desire, an Islamic State, and the consequence of achieving it: State Terror. Instead of utopia, Iran is an Islamic totalitarian nightmare, a predictable outcome, given its premises. There is no ambiguity in this statement. Ayatollah Khomeini was born into an affluent family and became a scholar with a profound knowledge of the Koran and sunna who studied and taught Islam all his life. Thus we may eliminate poverty and ignorance of Islam—two popular explanations for Islamic terrorism—as the motivating impulses behind Khomeini’s desire for an Islamic State. Khomeini and his clerics wished to implement Islamic laws in an Islamic State, which they managed to install. The ensuing state terrorism followed naturally from Islamic laws. In other words, Islam was and is responsible for Islamic terrorism, precisely the thesis I set out to demonstrate.[8]

I have a slight disagreement with the author’s use of the term “Islamist” a few times. I haven’t seen any convincing explanation for what separates Islamism from Islam, so I avoid this term as much as possible. However, this is a minor flaw in an otherwise good text.

Ibn Warraq demonstrates a very high level of knowledge and scholarship. He has done so consistently since the publication of his first book, Why I Am Not a Muslim, in 1995. His latest work is no exception. His only potential flaw as an author is that he can sometimes write long and complex books that appeal mainly to an academic readership.

The Islam in Islamic Terrorism is 355 pages plus bibliography, shorter than many of his previous books. This will make it appeal to a wider audience. The book provides key insights into the mentality and ideology of Islamic terrorists. It is an important and timely work.

12 thoughts on “Book Review of Ibn Warraq: The Islam in Islamic Terrorism”