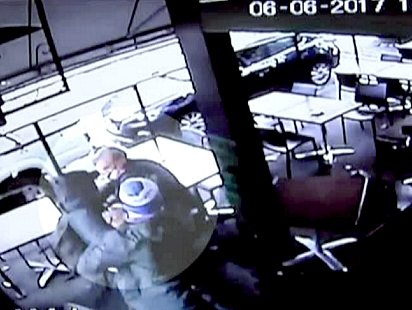 As reported here yesterday, the Australian columnist Andrew Bolt was attacked by Antifa thugs at a book launch. Mr. Bolt fought back against two of his attackers, resulting in the two heartwarming videos of the incident that were posted here.

One of those videos was evidently taken by the photographer shown in the CCTV footage, the same one Mr. Bolt wanted to identify. The fellow turns out to have the business name “Nathan CC Photography” (blog, Instagram, Facebook, Linkedin), and claims to have no affiliation with the group that assaulted the columnist — he just happened to be there.

Andrew Bolt has a report in the Herald Sun:

Antifa Claims my Attackers Were its “Family”

The violent Antifa group has claimed indirect responsibility for the attack on me. It confirms it is what it condemns — fascist, hate-speaking and even the victim: “Some of our family in solidarity were attacked by Andrew Bolt while they were protesting today. Why he isn’t in prison for his horrendous, violent language yet is beyond me.”

The photographer who turned up with them — Nathan CC Photography — claims he wasn’t in on the attack, even though I had not promoted the event (for fear of exactly this) and the publisher had also kept quiet on the venue:

Media reports have mistaken my presence at the scene as somehow connected to the protesters. This is not true. I am just a photographer and attend any political event or photograph any opportunity I can find, as i have done so for the last 2 years. I have no allegiance or affiliation with any political groups.

I can’t believe he was not tipped off. I have never seen him at any other event I have attended. How convenient that he turned up for this one.

The coward has now deleted the video. But you can watch it here.

5 thoughts on “Antifa Photographer at the Andrew Bolt Attack Identified”