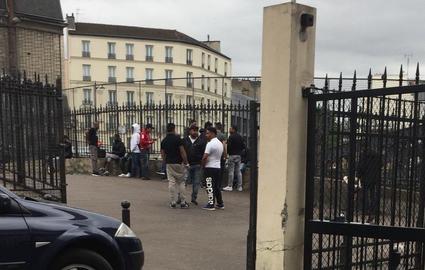 A district on the northern edge of Paris has become so culturally enriched that native French women are increasingly reluctant to appear on its streets.

Many thanks to Ava Lon for the translation from Le Parisien:

Paris: Women chased out of the Chapelle-Pajol neighborhood

Women in this part of eastern Paris complain that they can not walk around without being subjected to comments and insults from men.

There are several hundred square meters of asphalt abandoned to men alone, which women are no longer entitled to use. Cafés, bars and restaurants are prohibited to them. The same with the sidewalks, the subway station and the squares. For more than a year, the Chapelle-Pajol district (10th and 18th arrondissements) has completely changed its face: groups of dozens of lone men, street vendors, aliens, migrants and smugglers, occupy the streets, all the while harassing women.

Disgusted, the female inhabitants of the neighborhood decided to launch a major petition to denounce the situation. And a daily life that has become more and more oppressive. The young girls, who can no longer go out alone or wear a skirt or trousers that are too tight without receiving a lash of insults: one of them tells of her having endured a cigarette lighter that set her hair alight.

[Photo caption: For more than a year, the Chapelle-Pajol district (10th and 18th arrondissements) has completely changed its face]

“We are all subjected to unbearable treatment,” says Nathalie, 50, who claims thirty years in the neighborhood, and an “unheard-of” climate in recent months: “There are insults, incessant remarks. The atmosphere is agonizing, to the point of having to modify our itinerary, our clothes. Some have even given up going out.” Like the elderly lady of 80 years, who was sexually assaulted as she returned to her building, and is now confined to her apartment.

Aurélie, a young woman of 38 years, admits that she does not recognize the quarter where she has lived for 15 years, rue Perdonnet (Xe): “The simple fact of walking down the street has become problematic. The café downstairs, a once-friendly bistro, has turned into an exclusively male haunt and is constantly crowded: I can expect my share of remarks when I go ahead, especially since they drink to excess: a few days ago, the simple fact of appearing at my window triggered a flood of insults, and I had to lock myself in my apartment. Some time ago, I used to take the Boulevard de la Chapelle from Stalingrad, even late at night … It’s unthinkable today.”

Laure avoids the Metro Chapel studiously. Like the place of the same name: “In recent weeks, I was caught in the middle of a sellers’ brawl. I screamed, and two of them took out knives to threaten me. I thought my final hour had arrived. And for months my 12-year-old daughter has no longer gone to school alone, nor anywhere in the neighborhood, by the way.”

Complaining would have little effect

How to combat the phenomenon? The women of La Chapelle know that filing a complaint would have little effect. Then, by mutual agreement, and on the advice of Nadine Mezence, deputy mayor for the equality of men and women (PS) of the eighteenth, they decided to organize an exploratory march in the near future. Together they will travel through all the places of the district where they are not wanted. Then they will report to the civic authorities their observations… Hoping to be heard. At the Town Hall, they are assured that their remarks will be examined with the utmost attention.

The issue of the harassment of women, including the presence of dozens of migrants in Pajol Street, will be discussed this Monday in the council of the arrondissement by the elected (LR), Pierre Liscia. While Eric Lejoindre, the Mayor’s Office (PS), recognizes the complexity of the situation: “Women have a feeling of vulnerability to this violence, often associated with alcoholism, but the public response is essentially police.”

Since the launch of the “Barbès respire” apparatus in January, by the police prefect with deployment of reinforcements on the sector, 110 operations have resulted in more than 19,000 evictions of sellers, and 884 people were arrested. But the inhabitants want operations of more ample scope to regain their lost tranquility…

Women, an endangered species in the heart of Paris

“From now on, our neighborhood is relinquished to men alone: not a single woman in the cafés. Not a child in the Louise-de-Marillac square. Some of us [females] are terrified at home.”

The inhabitants of the Chapelle-Pajol have just drafted a petition entitled “Women, an endangered species in the heart of Paris”, which they hope to see initialed by many supporters and victims before sending it to the town hall, the Prefecture of Police and the Public Prosecutor. They called on them “to finally ensure that the law and regulations are respected in the places where the dealers settle, to carry out investigations of the networks and to reinforce the number of police assets assigned to the area.”

“There are insults in all languages, theft, street drinking. The dealing that takes hold, and the employees of those dealing, who show to us every day that we are undesirable, ourselves and our children. This must stop.”