Prompted by the topic discussed in the recent video from Senegal, H. Numan weighs in on slavery — who took the slaves, who sold them, and who owned them.

Who sold the slaves? Everybody did.

A few days ago the Baron posted a video about slavery. I’ve written about it in the past, and I think it’s a good idea to elaborate on this revolting topic. There are so many of misconceptions about slavery. I actually met my very first slave a fortnight ago, here in Bangkok. Slavery is very much alive, even today.

First about that meeting. I met two businessmen from Ethiopia. One was well educated, and fluent in English. The other was an elderly gent who spoke only Ethiopian and was badly dressed. He hung at the back, and was sometimes spoken to harshly by the other guy. Not the way you would address an employee. He was treated much more like you would treat a beloved but not too bright dog. Only after they had left did I realize this elderly man was almost certainly a slave. Slavery still exists in Ethiopia, albeit illegal. “You’re not supposed to do that” sort of thing.

Slavery is practiced illegally in many nations, mainly in Africa and the Middle East. In some nations the practice is almost legal, for example in Mauritania. Theoretically slavery is illegal in the Middle East, but in reality it is widely practiced. The new soccer stadium under construction in Qatar is being entirely built with slave labor. People are recruited under false pretenses. Often they come from India, Myanmar, Thailand and the Philippines, but also from Pakistan. There is no ban on keeping mohammedans as slaves within mohammedanism. They have to hand over their passports upon arrival, and are badly paid, badly treated and not allowed to leave the building site. Some do, and are dealt with very harshly. First they get a severe thrashing by the police, then they are returned to their owners (‘employers’) who punish them again in front of their colleagues to show what happens with runaway slaves. Oh, sorry. I meant ‘employees’, of course. 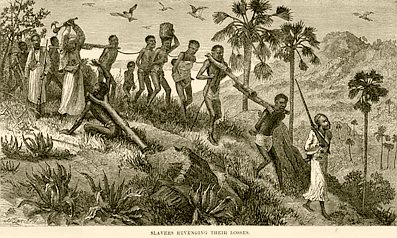 That’s sort of old hat. You should know that already. Much more serious is that new slave markets are appearing in Libya and the Islamic State. Yes, there is a fresh Arab Spring blooming in Libya. The problem is that Arab springs never bring anything new. Arab springs always wants to restore the revered old. Such as slavery. Talk with any mohammedan you like. Very few will openly oppose slavery. Slavery is sort of built into the religion. Wherever mohammedanism gains a strong foothold, slavery re-emerges.

Something you hear appallingly little about. Politically correct media and politicians don’t want you to know mohammedanism sees slavery as a cornerstone. They don’t have to, the religion can perfectly well survive without it. Christianity did, for example. Also in Judaism slavery no longer is acceptable. Israel does very well without it.

Regular readers know I’m not religious. Unless coffee is a religion, that is. I’ll believe I’ll have another cup! That does not mean to say I only see the bad sides of Christianity. Credit were credit is due: It was devout Christians who first realized that chattel slavery is an abomination. Long before it became mainstream or even economically feasible. No other religion until this very moment reached that conclusion. None at all. Christians figured this out in the 18th century, well before the invention of the steam engine make it economically possible.

Slavery has been practiced by all nations and cultures of the world after the first agricultural revolution, somewhere around 10,000 BC. It surely wasn’t love and peace for mankind before that. In order to keep slaves you need a certain surplus. You need to feed your slaves, lock them up, guard them and care for them. Before the first agricultural revolution people were hunters and gatherers. They simply lacked the resources to keep slaves. So what did they do with captives? They either killed them or ate them.

Every civilization that could owned slaves. Some more, such as the Mediterranean and Middle East civilizations, others less. Such as the Chinese empire. But all did, none exempted. The ‘noble savages’ of the Pacific islands, so revered by enlightenment thinkers and modern lefties, absolutely adored slaves. With some garlic sauce they tasted great!

Once people settled down and grew a regular supply of food it became possible to make other people do the jobs you don’t want to do yourself. In a nutshell, that’s what slavery is for. It’s expensive and dangerous. But at the same time it is prestigious and gives you a nice feeling of supremacy. Slavery doesn’t work economically. It never has. You need to feed your slaves and care for them. Provide them with living space. You can’t overwork them, that would reduce the useful lifespan. Eventually your slave will pass its expiration date and you still own it. Meaning you still have to feed and care for it.

That’s the difference with a machine. You turn it on only when you need it. When you don’t, you turn it off, which reduces the cost significantly. Machines don’t mind anything. Slaves do. A chattel slave has only one real incentive to work harder or better: the lash. Offering some extra food or a few trinkets is not really an encouragement. He’s still a slave and will remain so. Most people don’t like to be slaves, so they work as slowly as possible, run away at the earliest opportunity and can be highly aggressive toward their owners and keepers. That makes it economically unsound and highly dangerous.

One of the reasons why people kept slaves was for prestige and that feeling of supremacy. You can do whatever you want with a slave. Lust slaves were common in Roman times. The ‘beloved servant’ of the centurion cured by Jesus was almost certainly one of them. Centurions were upper middle class Romans; they could well afford such a luxury. We have inflatable dolls; Romans would find that rather primitive and perverted. As I said, you can do anything you want with a slave. And they better do what you want. Or else… That’s the reason why slavery exists today. Especially within mohammedanism. The supremacy part is for them the most important reason by far. Prestige comes as a close second.

How many people actually owned slaves in the Confederacy? About 10%. 90% of all slaves were, however, owned by only 10% of that number. That means that 90% of all southerners didn’t own slaves at all. 9% owned one or more slaves and only 1% owned hundreds of slaves. That was the top 1%, of course. They got the other 99% fighting for their property.

Most mohammedans don’t own slaves today. That doesn’t mean to say they don’t want to, or find the practice an abomination. If fact, a lot of mohammedans would dearly love to own slaves. Especially Westerners. Why? Westerners make notoriously bad slaves. They work very slow, argue everything, have a weak constitution (= need lots of medical care). So why? It’s really nice to actually own the people that make you feel inferior.

There’s a lot of talk about White Man’s Burden today. True. It was the burden of white men to abolish slavery worldwide. Because nobody else did it. Buddhists didn’t do it. Hindus didn’t do it. Shintoists didn’t do it. Mohammedans absolutely adore slavery. Only Europeans did. Of course they did it for their own benefit. The conquistadors conquered South America to get rich quick. Not to bring Spanish culture and civilization. That was simply an added benefit or side effect. The British colonized Africa just as everyone else did. A side effect was a much more peaceful continent, as warring tribes are very bad for business. Everybody gained.

If you visit north Mediterranean countries, you might notice lots of medieval towers in coastal areas. That was to prevent mohammedan slavers on raiding trips. Those towers were on guard 24/7 to give people warning of impending raids and offer a save refuge. Sometimes it even worked. Mohammedan slavers operated as far north as Iceland. Ireland and the south coast of England were often visited. 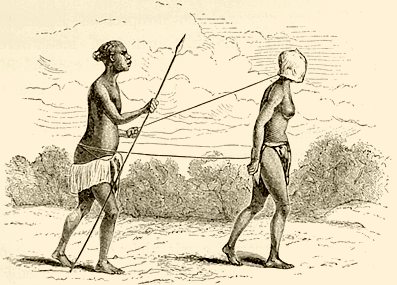 The biggest surprise for Livingstone was not the discovery of dark Africa. Dark Africa wasn’t dark. It wasn’t undiscovered and certainly not uninhabited. What he saw was a continent geared to one product only: slavery. Everything else was extra. The entire continent was a production line for slaves. Some black tribes specialized in catching slaves. Others provided way stations to rest slaves on the march towards the Middle East and North Africa. There was a lingua franca: Arabic. Everywhere he met Arabs who were managing some part of the slave network. His black guides and carriers all spoke Arabic. Livingstone didn’t have any maps. That’s why he went there to create them. Only to discover that the dark ‘undiscovered’ continent was much more of a busy company or factory entirely dedicated to slavery. Corporate headquarters were in Zanzibar. If you look at the map, you’ll see Zanzibar is very close to South Africa. Everything in Africa south of the Sahara was run like a colonial slavery empire by the Arabs. In reality, Arabs had colonized Africa long before and ran it as a merchant empire. What they didn’t do was shout it from the rooftops. They kept it secret for centuries. That was Livingstone’s surprise and his real discovery.

In West Africa they had sales offices for the export. That’s where European nations bought their African slaves. Most often trade was done not by Africans, but by Arabs. Those Arabs were able to speak the languages of the Western countries better, and after all: they managed the entire network. So why shouldn’t they do the sales bit?

For every slave that sailed across the Atlantic, at least three marched to the Middle East or North Africa. Why you see so many black people in the Americas and not in the Middle East and North Africa? A simple matter of management. The Europeans took much better care of their property. That made good business sense too: if you allow your slaves to breed you get the offspring for free. African slaves marched north were not so lucky. They were worked to death. Literally. Breeding was not on the Arab agenda. They simply marched a couple of slaves more, if they needed them.

Think about that when you hear White Lives Don’t Matter advocates whining about inequality and financial apologies.

28 thoughts on “Who sold the slaves? Everybody did.”