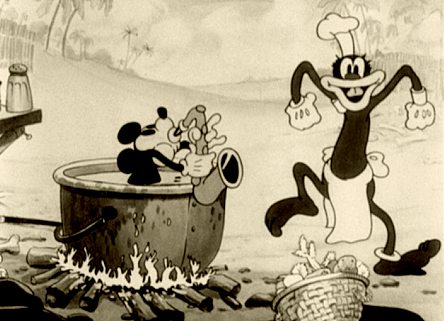 Last night we posted a story from the German town of Schlüchtern about the trial of a young culture-enricher who horribly mutilated the face of another culture-enricher.

If you thought this story couldn’t get any more horrific, you were wrong. But before we get into the grisly new details — which sensitive readers are ADVISED TO AVOID — let’s look at some other news items about the case. All the excerpts below were translated by Egri Nök.

As Bild and other sources report, the perpetrator was an Eritrean, and the victim a Somali.

Monday’s report from Frankfurter Allgemeine Zeitung runs contrary to the myth that “we need to integrate them better and help them more” — the youthful perp had “integrated” well:

Apparently neither alcohol nor drugs played a role. According to the prosecution, the defendant had neither drunken nor taken anything. The psychiatric expert at the trial says that the defendant has had a difficult past because of his history and his flight. He complained about “dark thoughts”, and sometimes drank alcohol to relax, and watched horror movies on TV. But the future that was waiting for the young man was not bleak at all. He had caught up on his school qualification and begun his qualification as a electronic-mechanic technician.

And from yesterday’s Fuldaer Zeitung we learn that:

The victim had already been the victim of a knife-attack and battery in downtown Schlüchtern, near the town hall, in May of 2016. He suffered a broken nose and contusions of the pubic bone, the lip and the thumb. He did not appear at the trial of the case against a fellow countryman in February, possibly because of the consequences of the brutal attack in October.

But the horrific new wrinkle appears in today’s Kölnische Rundschau:

Hanau — In the trial for a brutal facial mutilation in Hesse, a suspicion of cannibalism has arisen. On the second day of the trial, Wednesday, a police officer testified as a witness at the district court Hanau about his conversation with the victim.

The severely abused young man had told him that the attacker said during the attack that he was going to eat his flesh. The 20-year-old is charged with attempted murder and grave and dangerous bodily harm. In October 2016 the suspected perpetrator allegedly stabbed the victim, who at the time was 18 years old, in the neck with two knives in the victim’s apartment. Then, according to the prosecution, he bit off both his ears, cut off both his eyelids with a knife, and pierced both eyeballs with a ballpoint pen.

Victim blinded since the attack

The victim is blind as a result, and scarred for life by the injuries. The defendant has not yet replied to the allegations. Another police officer had testified at the start of the trial that he instantly thought of “cannibalism and ritual acts” at the sight of the mutilated victim at the crime scene.

The two young men, who had arrived in Germany as unaccompanied minors a few years ago, and met in a youth welfare institution, had been friends. The victim was still missing as of the beginning of the trial on Monday, and also at its continuation on Tuesday.

The victim disappeared after being treated in the hospital. He didn’t show up for court. No one knows where he is. He was blind, and his mutilated facial appearance must have made him quite conspicuous. How could he just vanish?

Did he perhaps meet the same fate as Charlene Downs?

8 thoughts on “Was the Schlüchtern Mutilator Simply Preparing Dinner?”