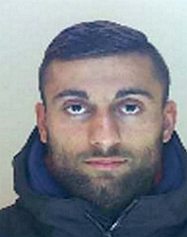 If so, call the police contact number and make a report.

Or better yet, speak into the potted plant, since Säpo listens to everything.

Many thanks to FouseSquawk for translating this article from Petterssons blogg:

IMMIGRANT VIOLENCE. The police released the name and photo of a wanted man who is being sought. He has been missing since the evening when the murder was committed.

The suspect is named Sharam Karim, and he is 23 years old. He is suspected on probable cause, which is the higher degree of suspicion, for a knife murder and two attempted murders along with two accomplices.

Now police appeal for public help. “This is a serious violent crime in the gang environment, you might say. Our three plaintiffs are from Hässleholme [Translator’s note: no-go zone] and in our opinion, they are visited by a circle of individuals, and it happens here,” says Magnus Dahl, reconnaissance leader by the police in Borås.

In connection with the knife altercation were a large number of young people on the scene. The two other men who were injured in the attack were stabbed several times.

Nobody was arrested in direct connection with the incident. But in mid-April, two men born in the early ‘90s were detained. They are now likely suspects for murder and attempted murder.

According to Magnus Dahl, Karim is not considered as dangerous to the public. However, threats to Karim himself are deemed to be great, given the circumstances.

In the current situation police do not know if Sharam Karim is in Sweden or may have left the country, but they are working on the theory that he has left Borås.

Magnus Dahl discourages members of the public from intervening themselves, but appeals to those who have information on where Sharam Karim is to contact the police directly instead at the number 114 14.

PREVIOUS 2017-03-23. One dead and two seriously injured in knife fights in Borås

IMMIGRANT VIOLENCE. A young man was stabbed to death in connection with a big brawl in the area Hässleholmen Borås, reported several media. The police received the alarm at 9:30pm about the fight in which at least fifteen youths were involved. The man died in hospital during the night. Two more young men were treated for serious knife injuries.

“This is not about a few scratches, but serious stab wounds, as I understand it,” says Johan Ljung, squad leader at the police control center in the West Region. At 11 pm, nobody had been arrested.

A helicopter also circulated in the area during the evening and night. “It’s not just for reconnaissance reasons, but also for security; it’s all about Hässleholmen and it may of course be quite unsettled,” says Johan Ljung.

There has also been unrest in the emergency room at the hospital in Borås, where some 30 primates gathered.

Knife fights have taken place outdoors in the residential area. No person was arrested by midnight. “However, we have taken in several people for questioning, but none of them is currently suspected,” says Johan Ljung.

6 thoughts on “Have You Seen This “Swedish” Man?”