In recent months Tommy Robinson has been championing the case of Chelsey Wright, who was savagely beaten and gang-raped by culture-enrichers in Sunderland, only to see her abusers walk free. Below is an article about Chelsey written by Anne Marie Waters and published today at UKIP Daily. 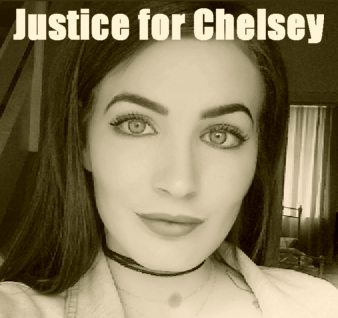 At the weekend, I went to Sunderland to attend a rally in support of Chelsey Wright, a lovely young woman who reported that she had been raped by a group of migrants last year. She recalls going for a drink with her mum and a friend, then waking up in a room with a man she didn’t know. She was beaten black and blue and “DNA forensics yielded two semen samples, only one of which could be properly tested, as well as traces of the date rape drug Rohypnol in her blood.”

Suspects were arrested. Then nothing. These men are now free, and Chelsey and her supporters are forced to initiate petitions and march through the streets to beg for justice — something that should automatically be hers.

I spoke to several people in Sunderland, and Chelsey’s story is sadly not unique. Another woman told me that she too had been raped, and a second said she left her home town because gangs of men were known to be spending time outside local girls’ schools (something I’ve been told repeatedly is happening across the country) and she wanted to get her daughter away. I heard stories of women being assaulted throughout the town, and the only people that give a damn are the ordinary working people that have been abandoned by an internationalist-ideologue political class.

Let us be clear about what’s happening, not only in Britain but across Europe. For decades, the left-wing elite that has governed Europe has been utterly desperate for “diversity”. Diversity simply means importing people from desperately poor countries to create entire new swathes of people to provide the poverty that the Left relies on. Having imported a new voting bank, the Labour Party turned its back on the old: took them for granted and shifted their attention to ‘diversity’, pandering in particular to Muslims.

In what would protect their new voting bank from criticism — thereby keeping the borders open for more — the Left transformed the CPS [Crown Prosecution Service] and Police into the Guardians of their political rhetoric, and not of the British people. Northumbria Police have issued a statement regarding Chelsey’s case. It concludes like this:

“It is disappointing that the victim is now having to endure a situation where the case she was involved in is being subjected to entirely misleading reporting, based on unfounded information, via social-media outlets.

This would seem to be a deliberate attempt to undermine the very strong community-cohesion that currently exists across the force area and we urge our communities to see it for what it is.”

What an extraordinary statement. It doesn’t explain what the misleading reporting is, but of course takes the opportunity to promote the multicultural utopia (I still can’t figure out why that is any concern of the police).

If they think there is nothing but fantastic ‘community cohesion’ in Sunderland, then they can’t be listening too closely to those at the sharp end of “diversity”, i.e. the English working class.

The white English working class is being trampled on, and nobody is there for them or listening. They have had to watch while their homes are transformed into places they no longer recognize and where they are no longer safe. Mass immigration from countries the English have nothing in common with, and cannot relate to, has made them strangers in parts of their own country.

Who can these people vote for? Where is the political will to change this? Politicians just don’t understand the world the English working class now live in. Professional politicians spend their days talking about strategy and theory, the daily reality at the business end of their policies is never felt. Furthermore, most wouldn’t dare do anything as risky as openly support women like Chelsey.

UKIP would do well to step up to the plate, and if it really wants to make an impact and offer hope to the abandoned, it can promise to do something about this. It can promise to do something about the politically correct CPS, to get rid of the unjust political policing that emerged from the MacPherson inquiry, and to apply the law, without prejudice, without fear, without favour. That is what we need, and it’s both morally right and politically wise for a political party to aim towards providing it.