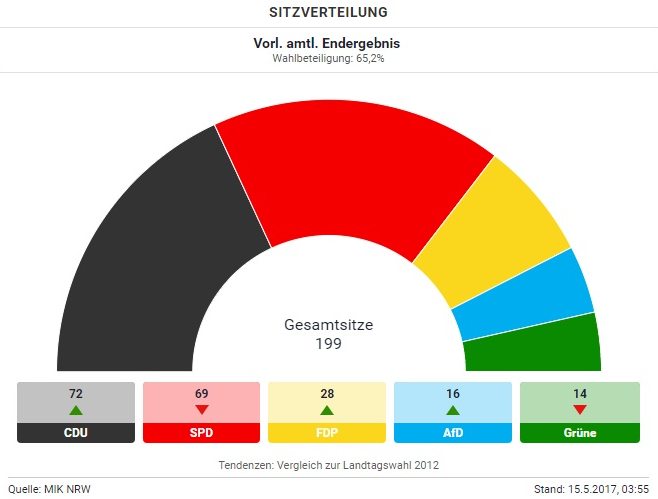 Yesterday’s state elections in North Rhine-Westphalia (NRW) were billed in the international MSM as a resounding victory for Angela Merkel’s party, the Christian Democrats (CDU). Which they were, but there was more to the results than that.

For example, in percentage terms, the AfD (Alternative für Deutschland, Alternative for Germany) gained more than any other party: 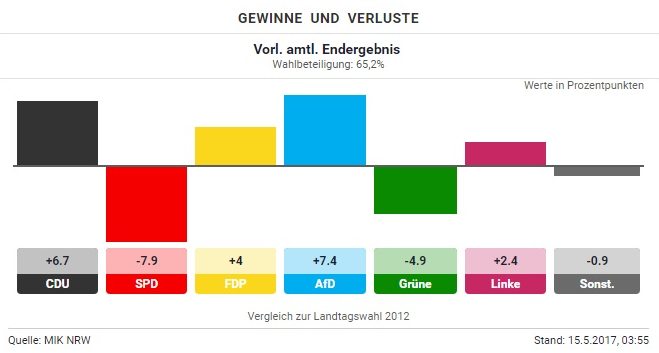 See these two articles from the Frankfurter Allgemeine Zeitung for detailed information on the elections (in German):

Our German translator Egri Nök has compiled a summary of the NRW election results for Gates of Vienna readers.

The Elections in North Rhine-Westphalia

North Rhine-Westphalia is that heavily enriched German state we have been talking about so often lately.

These are my observations:

First, I knew that Martin Schulz (SPD) was a complete air bubble blown by the MSM. I did not buy the hype for a second. It is not even worth discussing.

Why did they vote CDU (Christian Democrats; the local Bavarian party is the CSU) and FDP (Freie Demokratische Partei, Free Democratic Party*), and why did the AfD score only 7%?

I think there are different factors:

What also scared a lot of people away from voting AfD — and the CDU base used this argument aggressively — was that currently NO ONE will form a coalition with the AfD, so they voted CDU instead, hoping that a strong CDU would prevent another Red-Green coalition. A strong AfD could not have prevented that, because no one would have formed a coalition with them.

A final note: I wonder how many could not even find the AfD on the voting form: 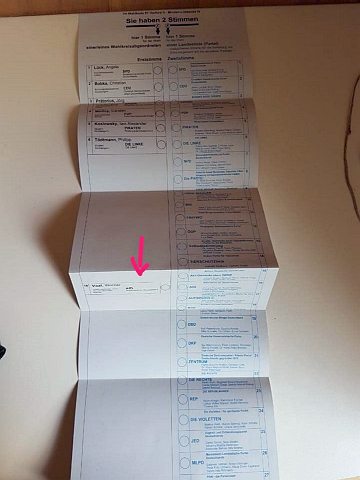