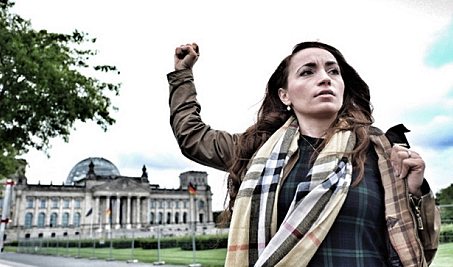 Zana Ramadani is a former member of Femen, and one of the activists who founded of Femen in Germany. She was born in Germany of Albanian stock — her parents were from Macedonia, and her mother was a believing Muslim.

Many thanks to Nash Montana for translating this interview with Zana Ramadani published in Tages Anzeiger:

“Muslim mothers raise their sons to be losers”

In her bestseller The Veiled Threat, Zana Ramadani writes about macho men, coddling educators and the West in the clutches of an integration frenzy.

[Photo caption: The former Femen activist Ramadani in Berlin: “Muslim women are the biggest oppressors of their daughters.”]

You tangle with everybody in your book: with politics, especially the Left, with feminists, conservative Islam, Muslim machos and their enabling mothers. Do you need police protection?

That’s a lot more difficult to get than one might imagine. I have filed numerous reports with the police, but because the threats, especially on social media, are almost all anonymous, the police can’t do very much. I therefore applied for a gun license last year.

Who shows the most severe reactions?

The gender-feminists. They ridicule my education, call me a single incident and relativize. The conservative Muslims, on the other hand, don’t criticize; they only threaten me.

Well, you can find pretty much anything there. They call me a whore, they threaten me with rape, murder, and since I am pregnant now, they threaten to kick my child out of my body.

It would be absurd to say no, I’m not afraid. It weighs on me, yes, but I try to not let it take over.

Is it especially bad that you as a Muslim woman criticize Islam?

If I were a German woman, they would call me a Nazi-slut and a racist; we know these accusations always come up first. But because I am a Muslim woman, it makes it harder and therefore worse. That I as a woman express myself critically against Islam is the worst of all. And so I am simply called mentally ill and traumatized. But they also fear me more, because I know very well what it is I am speaking of. Whenever possible, my opponents always avoid sitting across from me in talk shows.

What do you have against feminists? You were a member of Femen yourself at one time.

I am only against one very particular brand of feminists. Those who speak of solidarity among women but don’t live it. Those that think the only evil in this world is the white Western male, and he can be criticized without limit, unimpeded, while they automatically call you a racist if you criticize men from foreign cultures that are extremely misogynistic. Feminism is about human rights: one should be able to criticize anything and everything that abuses women’s rights, even Muslims. So when feminists call me a racist when I do that, I have a problem with their understanding of what feminism is.

Is this the reason you left Femen?

That was one of the reasons. Femen always had attracted these gender-feminists. It went so far that they wanted to burn a German flag at the Holocaust memorial to protest Fifa, and one wrote on her breasts “Bomber-Harris, do it again” because of Pegida in Dresden. That is unacceptable to me. [Translator’s note: Here’s a link about Bomber Harris in which he said he’d destroy Dresden again.]

Your family fled from Macedonia to Germany when you were seven years old. While your father was progressive and eager to start a new life, your mother became more traditional. Why?a

I was very lucky that my father was so educated. He came from a liberal family; not one of the women wore a hijab. When we arrived in Germany, he avoided contact with other Albanians, and instead became active in village life. He immediately learned German and told us over and over just how important it is to speak the language and that we have to work hard to speak it.

She couldn’t find connections. She was on the phone every week, for hours and hours, with her family at home and so she remained imprisoned in that world. The values and morals from there, which my father never liked, the narrow=mindedness and the parochialism against which he had always defended himself, became more and more important to her. Because the Germans were seen as the unbelievers, and German women were sluts, she had — the older I got — an ever-increasing need to control me. Because I could defile the family honor and then no Albanian man would want to marry me anymore. And it would be seen as her fault.

The women continue doing that under which you used to suffer as well?

The women are the biggest oppressors of their daughters. That’s why it would be important to concentrate on the women with integration efforts, and to show them the achievements of the Western world, because in the Muslim world women are the ones that are responsible for the preservation of family honor, not the men. The sons can sell drugs, be violent, that’s all no problem for the mothers, because the family honor will not be harmed by that. But the virginity of the daughter has to be protected at any price. And when that’s not the case, then it’s the mother who has failed, and has brought shame over the family. That’s why at some point my mother ordered her brothers to come to Germany. I fled on that very same evening to the women’s shelter, because I was rightfully afraid that I would be taken to Macedonia to be married off.

Muslim mothers in general get a bad rap in your book: You write of a fatal “cub-cult”.

Because the boys are being raised to be princes. They are coddled, spoiled, waited on hand and foot, and last but not least they’re raised to be losers. They fail in life, because the West is a meritocracy. It’s an achievement-oriented society. But in their homes they are being taught something entirely different. They don’t know that there are expectations of them, that they have to work hard, make efforts, and endeavor. And therefore they fail. And of course it’s always someone else’s fault first: The female teacher — that kuffar slut — has no business telling a son what to do. Or just generally all Westerners; they are all racists and don’t give Muslims a chance.

You write that you avoid certain areas in Berlin, for instance Neukölln, that you would be looked at and treated as fair game. Is that not a bit exaggerated?

No. In Neukölln, Wedding and Kreuzberg there are streets where you cannot go as a woman, and especially not during the summer. It’s like you’re running the gauntlet, you get massively harassed. Just recently I parked my car in Neukölln, and a young Muslim man yelled at me: “Hey slut, get lost, I want that parking space.” I only felt safe there once: last year when I wore a hijab for a report — for the first time the men didn’t look at me. It just can’t be that I, as a woman in a German city, only receive respect when I am veiled.

Is this the reason you fight back so vehemently against the hijab?

The hijab stands for gender apartheid. Wherever political Islam marches in, the veiling of the women takes place as well. In the beginning the hijab was merely meant to be able to tell honorable women from slaves that were free to be used. Yes, used, that’s what it says. And this is the thought-basis for the hijab, and it still exists: one differentiates moral women from immoral women. Therefore Western women are sluts and whores who can be touched.

Is that what third generation Muslims think who live in the West?

Wow, you should hear just how many of them speak of Westerners and what they speak about. That’s like Pegida in Turkish. Or Albanian or Arabic.

Still: Religious Muslim women who wear the hijab insist on their right of self-determination.

That self-determination is a joke. Millions of women in Muslim countries do not have a choice whether they want to wear the hijab. In Iran they even shave their heads because of it. And here they speak of freedom? I wish there were a hijab ban, especially in schools; at least there the Muslim girls should be free. For minor girls the hijab should be banned anyway: When you put a hijab on a 12-year-old, it sexualizes her, but they are still children! it really enrages me that from all of that understanding that some profess to have, they can’t comprehensively connect the simplest dots.

You are making exactly this understanding responsible for radical Islam. It’s a bold thesis.

No. Politics has courted conservative Islam for years, with their representatives and proxies being invited to talk show after talk show. All the while it is never about spirituality for them, but only about politics. At the same time nobody hears or listens to progressive Muslims, because they aren’t as loud. And they don’t have as much money either. Therefore even those Muslims who never even visited a mosque pre-millennially — I’m speaking of the majority of them — suddenly they get the impression that being Muslim is like its own identity. And that they are being discriminated against by “the others”, the Germans and the Swiss, and that they have to therefore defend their Muslim identity. And because of sheer Western uber-tolerance, the more tolerant Muslims are thrown to the mercy of the conservative Muslims.

You are going one step further: You are making Islam responsible for Islamism.

No other religion brings forth so many murderers as Islam. With that in mind, one cannot just say then that one has nothing to do with the other. Of course it does. You don’t have to go search for apologies or justifications or find any excuses. Muslims would rather see themselves as victims instead of practicing self criticism. But this is exactly what backward Islam deprives them of, this ability for self-criticism, because it is fixated on the afterlife and not on the present. It is not about progress or about asking questions. For instance this one: Why is hate being preached in a mosque, a holy place, a place of spirituality? The fact that you will never ever get an answer to this question says it all.

46 thoughts on “Zana Ramadani: “No Other Religion Brings Forth So Many Murderers as Islam””